The temporary agreement should keep Tehran from censure for noncompliance by the nuclear agency, a move that could have derailed already suspended nuclear talks. 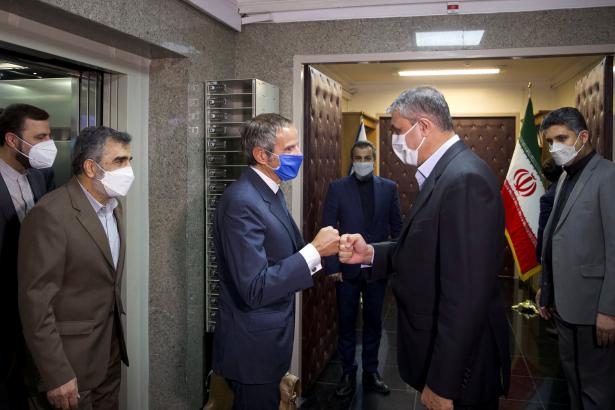 Rafael M. Grossi, director general of the I.A.E.A., third from left, bumped fists with Mohammad Eslami, head of the Atomic Energy Organization of Iran, in Tehran on Sunday, Wana News Agency, via Reuters

BRUSSELS — In a last-minute deal before Iran was likely to be censured for violating its agreements with the International Atomic Energy Agency, the new government in Tehran agreed on Sunday to let the organization reset monitoring devices that help measure the progress of the country’s nuclear program.

That deal has been considered a minimal requirement for a resumption of talks in Vienna on trying to restore compliance with the 2015 Iran nuclear deal, which President Donald J. Trump abandoned in 2018. President Biden wants to rejoin the deal, but talks, which have not resumed since June, have been hampered by the desire of both Iran and the United States to alter or enhance it. The nuclear deal essentially put tough limits on Iran’s ability to enrich uranium in return for the lifting of punishing economic sanctions.

Mr. Trump restored most of those sanctions and added to them; Iran responded by breaking the enrichment limits and is now much closer to having enough highly enriched uranium to create a nuclear weapon — which Tehran still insists it has no intention of doing.

The director general of the nuclear agency, Rafael M. Grossi, made a quick visit to Iran this weekend and worked out at least a temporary arrangement with Mohammad Eslami, the chief of the country’s Atomic Energy Organization.

In a joint statement issued on Sunday, they agreed that I.A.E.A. inspectors could service the monitoring equipment, which includes cameras, and replace their storage cards with new ones. But as agreed in a similar emergency deal last February, the contents of the storage cards are kept under seal and will be released to the agency only when and if Iran and the United States agree on a revival of the 2015 deal, known as the Joint Comprehensive Plan of Action.

The I.A.E.A., charged with monitoring Iran’s nuclear program, has been increasingly critical of Iran’s failure to cooperate with the agency and of its longstanding refusal to provide explanations for the presence of traces of radioactive material at several sites or about where that material may be now. The agency’s frustration was detailed in two confidential quarterly reports issued to the board last week.

The agency’s board meets on Monday, and European members, along with the United States, had been threatening to censure Iran for its noncompliance. Iran and its new hard-line government led by President Ebrahim Raisi threatened to abandon the nuclear arms talks in Vienna if a censure resolution was passed.

China and Russia, also signatories to the 2015 nuclear deal, along with Britain, France, Germany and the United States, have argued for patience with the new Iranian government and against the censure. That led to the drama of the latest Grossi visit, which Russia negotiated with Iran.

But as time goes by and Iran moves closer to having enough material for a bomb — estimated on Friday to be only a month or so away by David Albright, a nuclear expert with the Institute for Science and International Security, a research institution in Washington — the difficulty of reviving the 2015 deal grows sharper.

That deal was intended to keep Iran at least 12 months away from having enough material for a bomb. And critics say that Iran’s growing knowledge of how to make and service modern centrifuges and uranium metal — banned under the 2015 deal — cannot be unlearned, let alone its separate advances in missile technology.

European and American officials, such as Secretary of State Antony J. Blinken and Robert Malley, the U.S. special envoy for Iran who is handling the talks, have said that the time period for reviving the nuclear deal is “not open-ended.” And Mr. Raisi has yet to commit to a date to return to the Vienna talks. Countries in the region, including Saudi Arabia and Israel, have been expressing considerable concern about Iran’s expanding nuclear program.

Mr. Grossi’s trip may have momentarily resolved some of the complaints in one of the I.A.E.A.’s confidential reports, about lack of access to monitoring equipment. The agency also said that it did have access on Sept. 4 to a centrifuge assembly site that was damaged by sabotage, which Iran has blamed on Israel. But one of four cameras had been destroyed, its recording material missing, and another damaged. It is not clear whether the recordings in the other cameras will be recoverable.

But questions in the second report, about radioactive traces found at four Iranian sites and summarized as “undeclared nuclear material and activities,” have not been answered by Iran in an inquiry that has been open since 2018.

“The lack of progress in clarifying the agency’s questions concerning the correctness and completeness of Iran’s safeguards declarations seriously affects the ability of the agency to provide assurance of the peaceful nature of Iran’s nuclear program,” the report said.

In Tehran on Sunday, Mr. Grossi said, “I am glad to say that today we were able to have a very constructive result, which has to do with the continuity of the operation of the agency’s equipment here.” He said that the arrangement was “indispensable for us to provide the necessary guarantee and information to the I.A.E.A. and to the world that everything is in order.”

Mr. Eslami said that Mr. Grossi would return to Iran soon for further talks. He did not say whether Iran would eventually hand over copies of the older recordings, which Tehran had previously threatened to destroy.

“The memory cards are sealed and kept in Iran according to the routine,” Mr. Eslami said. “New memory cards will be installed in cameras. That is a routine and natural trend in the agency’s monitoring system.”

Steven Erlanger is the chief diplomatic correspondent in Europe, based in Brussels. He previously reported from London, Paris, Jerusalem, Berlin, Prague, Moscow and Bangkok. @StevenErlanger