Out of 3.4 million farmers working in the United States, fewer than 50,000 are Black...due to historic racial discrimination in federal farm programs — and now efforts to address that history are themselves being attacked as discriminatory. 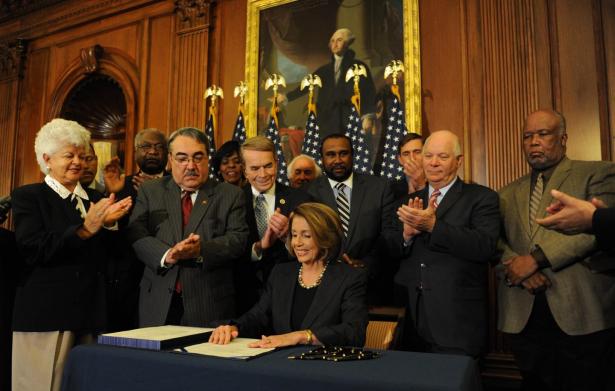 (This story was updated on Aug. 27 to clarify the purpose of the Cobell lawsuit.)

Out of 3.4 million farmers working in the United States, fewer than 50,000 are Black, according to the most recent Census of Agriculture taken in 2017. That disproportionately small number is due in large part to historic racial discrimination in federal farm programs — and now efforts to address that history are themselves being attacked as discriminatory.

Black farmers, most of whom work land in the South, suffered yet another blow from the U.S. government earlier this summer when a federal judge halted $4 billion worth of debt relief that was targeted to Black and other disadvantaged farmers through the American Rescue Plan, the economic stimulus bill passed by Congress and signed into law by President Biden in March. Opponents, who so far have been winning in court, claim the aid is "reverse racism."

The debt relief was blocked nationwide in June, when U.S. District Judge Marcia Morales Howard in Florida issued a preliminary injunction in a lawsuit filed by on behalf of a white farmer citing race discrimination, according to the Washington Post. The targeted debt relief program had already been temporarily blocked by a restraining order in a separate case brought by a white farmer in Wisconsin using the same argument.

Black farmers and their advocates said the fate of the promised debt relief was discouraging but not shocking to them, given their deep distrust of the U.S. Department of Agriculture (USDA).

"I'm not surprised. It's to be expected. I just wish that the disbursement of the funds had happened immediately, within 30 days of the American Rescue Plan passing," said Jillian Hishaw, an attorney who worked in agricultural law for 15 years and founded the nonprofit Family Agriculture Resource Management Service (FARMS) based in Rock Hill, South Carolina.

Tracy Lloyd McCurty is an attorney who serves as executive director of the Black Belt Justice Center and co-organizer of the Black Farmers' Appeal: Cancel Pigford Debt Campaign. She also told Facing South that many Black farmers believe the USDA did not act in good faith on the law's debt provisions.

"There is a very real sentiment amongst the Black agrarian community that the USDA engaged in obstructionism and sabotage by slow-walking the implementation of the debt cancellation provision," she said. "I think it's really important to understand that this debt is contested, that it's racialized, and that it was a tool of oppression to dispossess African American farmers of their farmlands and intergenerational wealth."

The USDA's relationship with Black farmers has been flawed from the start. Established during Lincoln's presidency to function as what he called "the people's department," the USDA has a long history of failing to serve all people equally.

This has been well documented. In 1968, the Kerner Commission on Civil Rights — established by President Lyndon Johnson to understand the causes of widespread and deadly riots in urban Black communities the previous summer — released its report blaming the unrest on pervasive racial inequalities. Among those it acknowledged were USDA discrimination against Black farmers, noting that "money from the [USDA] Agricultural Adjustment Administration went in the South chiefly to white landowners, while crop restrictions forced many Negro sharecroppers off the land." The department's failure to provide equal access to other support like loans and crop disaster payments has also been well documented, by for example Senate hearings and reports by governmental and nongovernmental organizations.

In 1999, the Clinton administration admitted to decades of USDA wrongdoing against Black farmers in settling Pigford v. Glickman, a class-action lawsuit brought against the department by lead plaintiff Timothy Pigford, a Black farmer from Cumberland County, North Carolina. The USDA's $1 billion Pigford settlement was the largest civil rights settlement ever won against the U.S. government.

The lawsuit said the agency discriminated against Black farmers on the basis of race and failed to investigate such claims from 1983 to 1997. It pointed to the USDA's unfair treatment of Black farmers when applying for farm loans and assistance, which led to higher rates of foreclosure and financial ruin for them while most USDA loans went to corporations and white male farmers. Black male applicants who did receive loans got $4,000 less on average than white males — and Black farmers often didn't bother to appeal because they lacked confidence they'd be treated fairly, according to a 1994 USDA-commissioned study.

Even after a federal judge in Washington, D.C., ruled in favor of the plaintiffs, the Clinton Justice Department slowed the flow of money to Black farmers by opposing blanket mediation and insisting that each case had to be investigated separately. A Congressional Research Service (CRS) report on Pigford also noted that the judge was "surprised and disappoint[ed]" that the USDA chose to exclude from the consent decree a line promising in the future to exert "best efforts to ensure compliance with all applicable statutes and regulations prohibiting discrimination."

Amid widespread criticism over the settlement agreement's structure, the large number of applicants who filed late, and problems with class counsel, Congress added a provision to the 2008 farm bill allowing late filers to have their cases evaluated on their merits. All of these claims were then consolidated into a single suit known as Pigford II. A decade later, Congress passed and President Obama signed into law the Claims Resolution Act of 2010, which provided additional funding for both Pigford II and the Cobell lawsuit brought over mismanagement of Native American trust funds.

The CRS report on the Pigford case noted that many of the problems surrounding its implementation — including a high denial rate for payments that were supposed to be "virtually automatic" — was due to a "gross underestimation" of how many claims would be filed.

Conditions for Black farmers deteriorated under the Trump administration. For example, a Politico analysis by race of 2020 loans helping farmers pay for land, equipment and repairs found that the USDA provided assistance to 71% of white applicants but just 37% of Black applicants. That same year, direct federal loans to Black farmers fell to a 10-year low, from a peak of 945 in 2015 to 460.

The targeted funding in the American Rescue Plan was supposed to help correct this legacy of discrimination — but now lawsuits filed in at least seven states including Florida, Tennessee, and Texas are casting it as discrimination against white farmers.

In Texas, state Agriculture Commissioner Sid Miller, who is also a rancher, sued to halt targeted debt relief for farmers of color in April, claiming that it discriminates against white people. He is represented by the right-wing legal advocacy group America First Legal, founded last year by former Trump administration officials Stephen Miller and Mark Meadows. In July, a Tennessee judge ruled in favor of a white farmer represented by the conservative groups Southeastern Legal Foundation of Georgia and Mountain States Legal Foundation of Colorado, calling the debt relief "reverse racism." And the Florida case that halted the aid nationwide is backed by the Pacific Legal Foundation, a libertarian organization based in California, according to NC Policy Watch.

"Right now things are very bleak for Black and brown farmers," Hishaw of FARMS said. "The fact that you have white farmers in seven different states and the court honoring their requests when they already own 97, nearly 98% of the land in this country, and we're just trying to save the 2% that's owned collectively by BIPOC [Black, Indigenous, and people of color] farmers, and they consider that to be a problem, just shows the standard operating procedure of white dominance when it comes to assets in this country."

Kamal Bell is chief executive officer of Sankofa Farms in central North Carolina's Durham and Orange counties, which specializes in leafy greens and runs programs that help people affected by food deserts. He recalled his experience applying for USDA funding, reporting that the agent he worked with stonewalled his application process, particularly for the real estate agreement and a crop enterprise budget. He was initially denied help and had to appeal.

Meanwhile, as the lawsuits challenging the targeted debt relief make their way through the courts, the Federation of Southern Cooperatives/Land Assistance Fund — a nonprofit cooperative association of Black farmers, landowners, and cooperatives based in rural Georgia — is asking Black farmers facing foreclosure due to USDA loans to contact them for help.

"We have heard from our membership of farmers that this ruling will cause significant financial and farming problems for them and others that were expecting the USDA to honor this commitment," the group said in a recent press release. "If you are a farmer or rancher of color facing foreclosure due to direct or guaranteed USDA loans, please contact the Federation so we can assist with getting the foreclosure suspended."

Elisha Brown is a Julian Bond Fellow at Facing South. She previously worked as a news assistant at The New York Times, and her reporting has appeared in The Daily Beast, The Atlantic, and Vox.