Dave Zirin’s extraordinary new book is devoted to telling how a star athlete “taking a knee” inspired young athletes across the country to join a historic social movement. 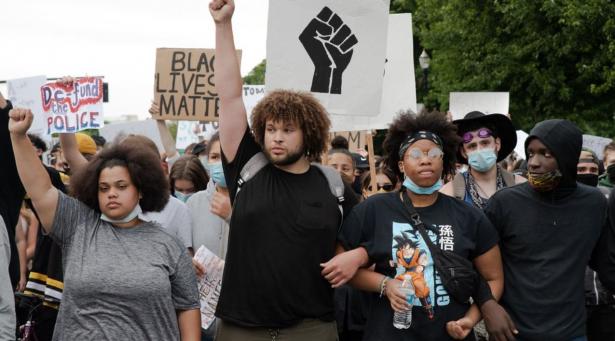 years ago this month, on September 1, 2016, Colin Kaepernick went down on bended knee during the national anthem before a game between his San Francisco 49ers and the Los Angeles Chargers to protest police violence and institutional racism. Dave Zirin’s newest book, The Kaepernick Effect: Taking a Knee, Changing the World, is a collection of compelling stories that put the reader at the center of the tumultuous, frightening, and stirring protests for racial justice that, when put together, reveal the ways taking a knee transformed sports and the broader society.

Zirin is The Nation’s sports editor, a columnist for The Progressive, one of UTNE Reader’s “50 Visionaries Who Are Changing Our World,” and the author of eleven books on the politics of sports—but none are more important than The Kaepernick Effect in helping us understand how to build social movements to change the world.

Share this article on
This extraordinary book is the essence of a “people’s history” approach to examining the past.

This extraordinary book is the essence of a “people’s history” approach to examining the past.  Much of what’s been written about Kaepernick focuses on his struggle with NFL owners, his impact on pro sports, or the debates in the media. Zirin interviews high school and college students around the country, among others, who were drawn into taking a knee themselves. He defines “the Kaepernick effect” in the book’s introduction:

"When this project began, “The Kaepernick Effect” referred, in my mind, to the forgotten hundreds if not thousands of young athletes who took a knee during the national anthem in protest of racism and police brutality. They were, of course, echoing the actions of former San Francisco quarterback Colin Kaepernick. . . .  But now, after interviewing many of these people across the United States, I understand that the “The Kaepernick Effect” was not the result of someone else’s protest, but a cause, a catalyst for something far greater. It was the warning for a future that came to pass after the police murder of George Floyd, coming on the heels of the murders of Ahmaud Arbery and Breonna Taylor."

The uprising for Black lives that erupted in 2020—the broadest protest in U.S. history—is incomprehensible without an understanding of the way that thousands of student athletes from around the country transformed sports from an after-school escape to a battlefield against white supremacy. To help illuminate this, Zirin interviews two of my most dynamic former students from Garfield High School in Seattle, Washington: Janelle Gary and Jelani Howard.

“It was the whole team, even the managers and even the cheerleaders started taking a knee,” Jelani says about his football team’s decision to take a knee during the national anthem, the first time an entire team made the gesture. “People would comment on it saying nasty or disrespectful things. Then there was the one morning where our head coach didn’t show up and everybody was just confused. He had finally got there like an hour late and he told us that somebody had slashed his tires. That’s when everybody knew, wow, this is real.”

There’s no doubt it got real. The coach, Joey Thomas, had to move out of his house because of the harassment; the team received death threats, players were told they wouldn’t be admitted to college, and Garfield High School was bombarded with hate mail.

Despite the backlash, Jelani told Zirin, “It’s something that I’ll always be able to tell my kids. I did something that I will always remember, because it showed me that if you want to stand up for something, just go do it. Nobody thought that fifteen-, sixteen-, seventeen-year-old kids would be able to help lead a movement.”

The conversation in the locker room led the team to analyze the ways racism is connected to other forms of oppression and the ways those forms of oppression mar many aspects of their lives, including the media and the school system. Yes, football players publicly challenging homophobia may be rare, but Garfield High’s scholar athletes wanted to upend all forms of oppression. While The Kaepernick Effect does not include it, the athletes presented a six-point program to address injustice:

1. Equality for all regardless of race, gender, class, social standing, and/or sexual orientation—both in and out of the classroom as well as the community.

2. Increase of unity within the community. Changing the way the media portrays crime.

3. Academic equality for students. Certain schools offer programs/tracks that are not available at all schools or to all students within that school.

4. [Opposition to the] lack of adequate training for teachers to interact effectively with all students. Example, “Why is my passion mistaken for aggression?” “Why when I get an A on a test does the teacher tell me, ‘Wow, I didn’t know you could pull that off?’ ”

5. [Opposition to] segregation through classism.

6. Getting others to see that institutional racism does exist in our community, city, and state.

The protest of the Garfield football players soon spread to the girls’ softball team, whose players all took a knee and would go on to win the state championship. As Janelle, the team’s star catcher, explained, “People say negative things to try to scare you on purpose, but if you’re able to persevere through that—like in the days of the civil rights movement—I feel like you’re going to see more change.”

It truly stirs me to know that those two students whose leadership helped to shake not only our school and our city, but an entire nation, were students in my world history and ethnic studies classes at Garfield when they began finding their voices.

Iremember when Janelle first joined my class. She was unassuming, and I wouldn’t have picked her right away as the student who would go on to help lead a protest movement. But over the course of the year, I saw her develop her sense of self and a strength in her convictions about what was wrong with the world. She began leading conversations in my class and making historical connections between the long legacy of slavery, Jim Crow, redlining, and mass incarceration today.

Similarly, Jelani’s easy-going nature, and the ease with which a smile broke out on his face, didn’t fit the stereotype of a militant student activist. And yet, the sense of purpose Jelani developed and brought to class made us all feel that our time together studying history wasn’t about grades but about learning how to make a difference.

When we watched the film and read Zirin’s essays, I had hoped that one day one of my students would carry one of the lessons out of my class and on to a field.

Years before athletes were speaking out about social issues in significant numbers, I showed Janelle, Jelani, and their classmates Zirin’s film, Not Just a Game, which details the role of sports in replicating master narratives around race, sexuality, and gender, and the history of athletes using their exalted platform to speak out for social justice.

When we watched the film and read Zirin’s essays, I had hoped that one day one of my students would carry one of the lessons out of my class and on to a field, but I really could never have imagined that even before they graduated, they would take part in a mass uprising for racial justice. And thanks to the visionary coach Thomas—who is also interviewed in this book—my students’ yearning for justice was nurtured on the field and allowed to blossom, despite the attacks by bigots.

Those on the far right who jeered at, threw garbage on, and threatened the student activist athletes who took a knee are among those today who support the increasing number of state bills banning the teaching of structural racism. These guardians of white supremacy claim that educators—by teaching about the ways that the genocide of Indigenous people and the enslavement of Black people laid the economic and political foundation of our country with devastating consequences to this day—are indoctrinating students and making them feel ashamed of their history.

In fact, it is the students who are demanding that conversations about anti-Blackness and injustice take center stage in the classroom. Educators are increasingly being compelled by young people to answer questions such as why their school is so segregated, why police receive more funding than counselors in the school, why there is so little in the textbooks about the many amazing contributions by Black people to society, or why Black kids are suspended at such disproportionate rates.

And with student athletes often the ones to lead this charge, social justice activism is now taking on a new marker of social status. It’s now “lit,” as the kids say these days, to take bold action against racism.

The courage of these young people who are struggling through so many overlapping crises is astounding. “High school students are being raised under the specter of ecological disaster, historic income inequality, and spiraling college tuitions,” Zirin writes. “Their very existence in these terribly challenging times is resistance, but they are doing more than existing. They are fighting back.”

Student athletes helped break down barriers for all students so they could see ways to resist anti-Blackness and find the courage to act on their convictions. Now, on courts and in classrooms around the country, a new consciousness among youth has arisen alongside the movement for Black lives. If you aren’t working with young people every day, you might not fully appreciate the generational shift going on.

Youth are rewriting the rules of the game, because they’ve discovered the game is rigged in favor of the rich, white, and powerful. The students I work with are more likely to root for socialism than capitalism, many more of them are knocking down previous generations’ definitions of gender and sexuality, and they are increasingly leaping up to join movements to defund the police and invest in restorative alternatives to the carceral state.

Zirin concludes The Kaepernick Effect in conversation with the legendary Dr. John Carlos who, along with Tommy Smith, raised his Black-gloved fist on the medal stand in defiance of racism and poverty during the playing of the national anthem at the 1968 Olympics in Mexico City. That image of rebellious athletes sent shockwaves around the world and throughout time.

Zirin asks Dr. Carlos what advice he has for youth today, to which he responds, “You can’t fight if you don’t know your history. And if there is anything else I’d want these young people to know, it’s just to make sure that they keep loving: Love thyself. Love thy neighbor. Set a precedent, and let them know that we are not the negative force in society. We are the positive force.”

On Tuesday, September 21, at 7 p.m. Central Time, Dave Zirin will take part in a discussion of his new book, The Kaepernick Effect, sponsored by The Progressive magazine and A Room of One’s Own bookstore. The event will be streamed live on Facebook at facebook.com/theprogressivemagazine, and on YouTube at youtube.com/theprogressive. It will also be archived for later viewing.

[Jesse Hagopian teaches ethnic studies at Garfield High School in Seattle, is an organizer with Black Lives Matter at School, and editor of “More Than a Score: The New Uprising Against High-Stakes Testing.”]