Hints of a previously unknown, primordial form of the substance could explain why the cosmos now seems to be expanding faster than theory predicts. 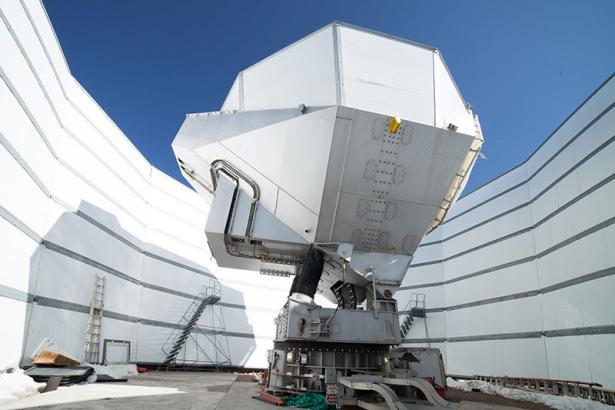 Data from the Atacama Cosmology Telescope suggest the existence of two types of dark energy at the very start of the Universe., Giulio Ercolani/Alamy

Cosmologists have found signs that a second type of dark energy — the ubiquitous but enigmatic substance that is pushing the current Universe’s expansion to accelerate — might have existed in the first 300,000 years after the Big Bang.

Two separate studies — both posted on the arXiv preprint server in the past week1,2 — have detected a tentative first trace of this ‘early dark energy’ in data collected between 2013 and 2016 by the Atacama Cosmology Telescope (ACT) in Chile. If the findings are confirmed, they could help to solve a long-standing conundrum surrounding data about the early Universe, which seem to be incompatible with the rate of cosmic expansion measured today. But the data are preliminary and don’t show definitively whether this form of dark energy really existed.

“There are a number of reasons to be careful to take this as a discovery of new physics,” says Silvia Galli, a cosmologist at the Paris Institute of Astrophysics.

The authors of both preprints — one posted by the ACT team, and the other by an independent group — admit that the data are not yet strong enough to detect early dark energy with high confidence. But they say that further observations from the ACT and another observatory, the South Pole Telescope in Antarctica, could provide a more stringent test soon. “If this really is true — if the early Universe really did feature early dark energy — then we should see a strong signal,” says Colin Hill, a co-author of the ACT team’s paper1 who is a cosmologist at Columbia University in New York City.

Both the ACT and the South Pole Telescope are designed to map the cosmic microwave background (CMB), primordial radiation sometimes described as the afterglow of the Big Bang. The CMB is one of the pillars of cosmologists’ understanding of the Universe. By mapping subtle variations in the CMB across the sky, researchers have found compelling evidence for the ‘standard model of cosmology’. This model describes the evolution of a Universe containing three primary ingredients: dark energy; the equally mysterious dark matter, which is the primary cause of the formation of galaxies; and ordinary matter, which accounts for less than 5% of the Universe’s total mass and energy.

Current state-of-the-art CMB maps were provided by the European Space Agency’s Planck mission, which was active between 2009 and 2013. Calculations based on Planck data predict — assuming that the standard model of cosmology is correct — exactly how fast the Universe should be expanding now. But for the past decade or so, increasingly accurate measurements of that expansion, based on observations of supernova explosions and other techniques, have found it to be 5–10% faster3.

Theorists have suggested a plethora of modifications to the standard model that could explain this difference. Two years ago, cosmologist Marc Kamionkowski at Johns Hopkins University in Baltimore, Maryland, and his collaborators suggested an extra ingredient for the standard model4. Their ‘early dark energy’ — which made more precise an idea that they and other teams had been working on for several years — would be a sort of fluid that permeated the Universe before withering away within a few hundred thousand years of the Big Bang. “It’s not a compelling argument, but it’s the only model we can get to work,” says Kamionkowski.

Early dark energy would not have been strong enough to cause an accelerated expansion, as ‘ordinary’ dark energy is currently doing. But it would have caused the plasma that emerged from the Big Bang to cool down faster than it would have otherwise. This would affect how CMB data should be interpreted — especially when it comes to measurements of the age of the Universe and its rate of expansion that are based on how far sound waves were able to travel in the plasma before it cooled into gas. Planck and similar observatories use features that were left in the sky after this transition to make such calculations.

The two latest studies find that the ACT’s map of the CMB’s polarization fits better with a model including early dark energy than with the standard one. Interpreting the CMB on the basis of the early dark energy model and ACT data would mean that the Universe is now 12.4 billion years old, about 11% younger than the 13.8 billion years calculated using the standard model, says Hill. Correspondingly, the current expansion would be about 5% faster than the standard model predicts — closer to what astronomers calculate today.

Hill says that he was previously sceptical about early dark energy, and that his team’s findings surprised him. Vivian Poulin, an astrophysicist at the University of Montpellier in France and a co-author of the second study2 based on ACT data, says it was reassuring that his team’s analysis agreed with the ACT team’s own. “The lead authors are very, very hard-nosed, conservative people, who really understand the data and the measurements,” Kamionkowski says.

But Galli warns that the ACT data seem to be inconsistent with calculations by the Planck team, which she was part of. And although the ACT’s polarization data might favour early dark energy, it is unclear whether its other major set of data — its map of CMB temperatures — shows such a preference. For these reasons, she adds, it will be crucial to cross-check the results using the South Pole Telescope, an experiment she is part of.

Wendy Freedman, an astronomer at the University of Chicago in Illinois who has contributed to some of the most precise measurements of cosmic expansion, says that the ACT-based results are interesting, if preliminary. “It is important to pursue different models” and compare them with the standard one, she says.

I am a staff reporter at Nature in London and a contributing editor (formerly a staff senior editor) for Scientific American magazine. I have also been a reporter at Science News magazine and I have written for Physics World, New Scientist, Sky & Telescope, National Geographic News, and Physical Review Focus.

Nature is the foremost international weekly scientific journal in the world and is the flagship journal for Nature Portfolio. It publishes the finest peer-reviewed research in all fields of science and technology on the basis of its originality, importance, interdisciplinary interest, timeliness, accessibility, elegance and surprising conclusions. Nature publishes landmark papers, award winning news, leading comment and expert opinion on important, topical scientific news and events that enable readers to share the latest discoveries in science and evolve the discussion amongst the global scientific community.  Subscribe to Nature