books Strong and Certain: On Deesha Philyaw’s “The Secret Lives of Church Ladies”

This award-winning collection of short stories, writes reviewer Simms, "stands within a tradition of writing that’s about the beauty and burden of Black life within oppressive social systems." 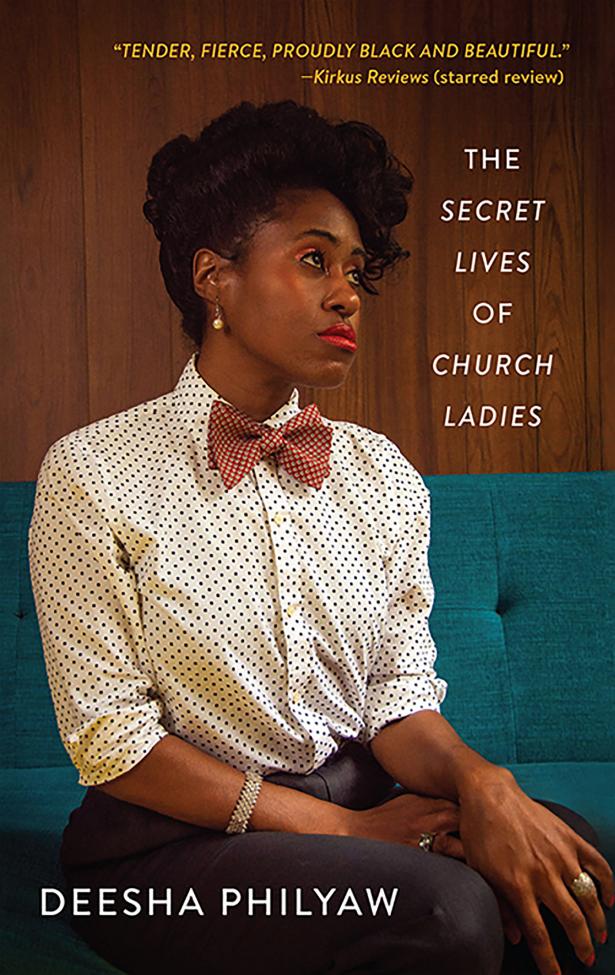 IN “PEACH COBBLER,” which is the fourth story in Deesha Philyaw’s debut collection of short stories, The Secret Lives of Church Ladies, Olivia tells the reader how she became “a student of [her] mother and her cobbler-making ways.” Olivia’s mother makes cobbler once a week from scratch, the recipe committed to her memory. She’s the kind of baker who can add the right portion of ingredients by simply looking and without using measuring cups. By all accounts, the mother’s cobbler is delicious. The married pastor of their church comes to Olivia’s home each week to eat an entire pan of the dessert, then retreat with her mother into a bedroom that she and her mother share. Years later, while the affair is still going on, a teenage Olivia makes her mother’s cobbler and gives it to the pastor’s wife and son, whom the narrator has recently tutored. They, too, say the cobbler is the best they’ve ever had. What is disturbing about the story, in addition to the betrayals enacted by a decade-long affair, is the exploitation of the mother’s talent for caregiving and how it’s passed on to her daughter. Like many characters in this compelling story collection, the gifts that women possess don’t pay off in the ways that they should. This is one source of their sadness and loneliness, which are some of the main themes within the book. And it rings true about the lives of contemporary Black women. We can be academically brilliant, great lovers, and incomparable cooks, but too often what we have to offer is exploited by others within our own communities. Like Olivia’s mother, many Black women end up brilliant, but used up and alone.

Philyaw’s stories examine this exploitation and its relationship to heterosexual marriage and the Black church. Both institutions are the subtext of her stories, if not in the present action. In this way, Philyaw’s fiction stands within a tradition of writing that’s about the beauty and burden of Black life within oppressive social systems. Toni Morrison’s Beloved is a classic example, as well as recent novels like An American Marriage by Tayari Jones, which looks at marriage within the carceral state, and The Turner House by Angela Flournoy, about family dynamics as they bump against injustices in the housing industry. As I read The Secret Lives of Church Ladies, I was also reminded of the 2019 memoir The World According to Fannie Davis by Bridgett M. Davis. That book details a mother-daughter relationship within an underground economy in which the mother works. Like Davis, Philyaw is interested in relationships between mothers and daughters, what’s passed on, rejected, and learned. And like the characters in Go Tell It on the Mountain by James Baldwin, A Visitation of Spirits by Randall Kenan, and Mourner’s Bench by Sanderia Faye, Philyaw’s characters struggle with gender and sexuality norms prescribed by the Black church.

“Peach Cobbler,” for example, makes clear how religious patriarchy functions in its young narrator’s mind. Olivia’s been taught to worship men. “Even before he started coming by on Mondays,” Olivia tells us, “I had suspected that Pastor Neely, the pastor of Hope in Christ Baptist Church, was God. He was big, black and powerful, as I imagined God to be.” In “Dear Sister,” about a deadbeat dad who has recently died, one of the deceased’s estranged daughters challenges the wisdom of Exodus 20:12. “Honor thy father?” Tasheta yelled. “When did that motherfucker ever honor you? Or me? Or Kimba? Or Nichelle? Or anybody but his own trifling self? I ain’t honoring shit.” Both stories offer complicated scenes of gender dynamics as having been shaped by religious thinking and texts. Not so in “Instructions for Married Christian Husbands.” Here, the female narrator is clearly the one with power and the married Christian men who cheat with her are “infantilized husbands” and pawns in her game. If these characters seem less nuanced than those in other stories, it’s because the driving engine of this story is its structure, and not its character. Using the form of an instructional guide, the story is a satirical examination of the rules one must follow to pull off this type of tryst. The flatter characters serve the purpose of the satire and its message.

But in most of the stories, religion has not made things clear. In three stories, “Jael,” “Snowfall,” and “Eula,” women struggle to love other women because it’s forbidden by the church and their families. “As I walked out her front door for the last time,” the narrator Lee says of leaving her mother’s home, “she hurled the words at my back: ‘Running off from here with some girl you met on the internet. Who raised you?’” Being raised right means you aspire toward marriage with a man. Loving another woman means you have a “reprobate mind.”

So, what are the secret lives of church ladies? In the final story, it’s the daydream of a love affair with Eddie Levert. This is what Mama looks forward to each day as she slips further into dementia. Daughter is there braiding Mama’s hair and making room for this ridiculous daydream and its rituals. Like all of the stories, this one breaks your heart because the loneliness and estrangement between the characters is palpable. Still, they find ways to care for each other, and Philyaw writes the scenes of caregiving without sentimentality. Her characters create intimacy and have hope, not despite their ugly odds but because of them. It’s why, in the midst of her dementia and pain, Mama’s singing voice is “strong and certain” — the last words of the final story and an apt description for this collection.

Renee Simms’s work appears or is forthcoming in Guernica, Oxford American, Callaloo, Ecotone, and elsewhere, and her debut story collection Meet Behind Mars was an Indies Foreword finalist and listed by The Root as one of 28 brilliant books by Black authors in 2018. She’s received fellowships from the National Endowment for the Arts, Ragdale, Vermont Studio Center, and Bread Loaf Writers’ Conference.