There's one area where Ted Lasso might be sticking a little too close to the source material – its lack of LGBTQ+ characters. 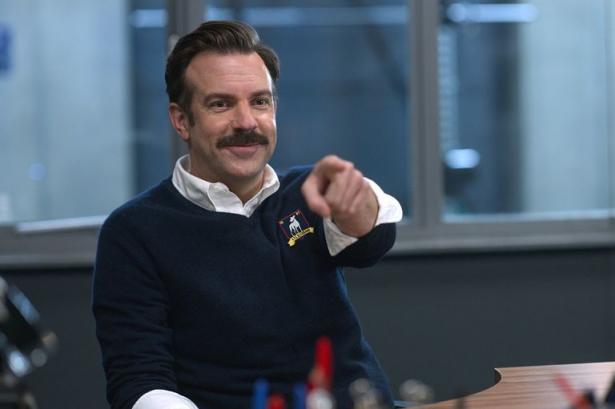 Ted Lasso's BELIEVE mantra has paid off! Apple TV+'s breakout hit, about a team of underdogs coached by the ultimate fish out of water, managed to scoop up seven Emmy Awards this year in a bona fide sweep.

In fact, the love for Ted (the show, the man, and that moustache) is almost universal. The ensemble sitcom is heartwarming comedy at its best; it's fun, it artfully resolves its conflicts, and it's set in a version of London that's part-postcard, part-Richard Curtis rom-com.

And, despite its premise, it also manages to strike a chord with football fans and non-fans alike. After all, Richmond FC might be fictional, but plenty of real-life locations will have you Leo-meme-pointing at the screen.

Unfortunately, there's one area where the show might be sticking a little too close to the source material – its lack of LGBTQ+ characters.

Sure, there's no shortage of TV that fails on the representation front, but the absence of queerness in Ted Lasso hits differently. It mainly feels weird because of the show's own self-styled progressiveness. Its first season was met with a wave of op-eds and features celebrating its take on non-toxic masculinity, female friendships and up-front sweetness.

Not to mention earlier in season two when the show featured a whole subplot dedicated to an exploitative oil company using naive Premier League players to advertise its business.

The lack of LGBTQ+ themes and characters is particularly noticeable though, because at the end of the day, Ted Lasso is a show about football, a sport that has long struggled with homophobia on and off the pitch.

In case you were unaware, there have only ever been a handful of openly gay professional football players, and there are none currently playing in the Premier League. The first-ever openly gay pro footballer was Justin Fashanu, who played for a number of clubs during his career before publicly coming out in 1991.

Following allegations of assault, and fear around receiving a fair trial because of the public knowledge of his sexuality, Fashanu died by suicide in 1998. His niece Amal has since set up the Justin Fashanu Foundation to tackle homophobia in the sport.

Perhaps the most common issue around homophobia in football comes from the stands. Homophobic chants were a mainstay of plenty of Premier League clubs for decades until they were officially banned by the FA back in 2007.

In the intervening years, things have definitely improved. A recent survey by Staffordshire University showed that 93% of football fans would not hold any hostility to a footballer coming out, and during this year's Euros Championship, plenty of fans were happy to see teams support Stonewall's Rainbow Laces initiative.

On top of that, plenty of major UK football clubs have LGBTQ+ supporters clubs – including Crystal Palace's Proud and Palace and Liverpool FC's Kop Out groups.

There's still plenty of work to do to tackle bigotry in the sport though – with data from the FA and UK Police Force suggesting that incidents of hate crime took place at one in 10 football fixtures during the 2019-2020 football season.

This is all to say that, frankly, it feels odd for a show in 2021 – set in the world of professional football – to not even attempt to grapple with such an important issue.

Perhaps this could be forgiven if the show was *only* steering clear of negative football stereotypes in an attempt to stick to its relatively harmonious worldview. But that still doesn't justify the total absence of queer characters. There's really not even one.

At best, there were just a few tiny little morsels that might suggest some LGBTQ+ subtext. Back in season one's seventh episode, we're given a very throwaway line from Juno Temple's Keeley, where she implies she's had some romantic history with women. During a scene where she misunderstands a conversation with Rebecca, she happily says, "…If I'm gonna dip my toe back into the lady pool."

There's also a very, very brief joke in season two about Colin not knowing what Grindr is, and in 'Beard After Hours', Brendan Hunt's character does end up at something that kind of reads like a trendy east London LGBTQ+ venue. But honestly, we're embarrassed just stacking those up. There's scraping the barrel for scraps, and then there's the above.

It's a problem because, hold on to your hats, LGBTQ+ people exist and should be on your shows. It's doubly a problem for Ted Lasso and shows like it because, if you present a chocolate-box version of London/the world where everything is nice but no one is gay, you're suggesting that the presence of LGBTQ+ people conflicts with that image. Whether it's your intention or not, you imply that things might be better off without us.

The problem of omission plagues a lot of genres (see also: science fiction, where a lack of LGBTQ+ characters suggests a future without them), but it feels particularly icky in stories that use 'wholesomeness' as part of their shtick.

This is because, historically, marginalised groups have been excluded from the 'wholesome'. Our queerness isn't seen as family-friendly, or appropriate, or suitable for all ages. More often than not we're told that some aspects of queer identity are something to be ashamed of, or that there is something inherently sordid or sexual about discussing anything that isn't heterosexuality.

If Ted Lasso wants to hold on to that wholesome self-image while also being inclusive, it better address that issue ASAP. If it doesn't, the show risks alienating LGBTQ+ fans even further. After all, there's only so far the (frankly alarming) magnetism of Brett Goldstein and Hannah Waddingham can get you.