At last weekend’s Teamsters for a Democratic Union convention, nearly 400 rank-and-file Teamsters convened to discuss taking power in their union and organizing Amazon. 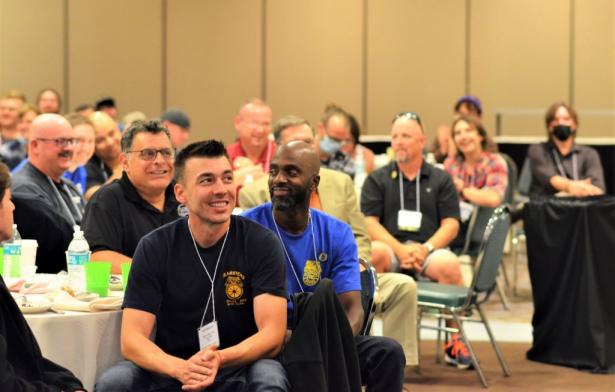 Last weekend, nearly four hundred Teamsters from across the country gathered in Chicago for the forty-sixth annual Teamsters for a Democratic Union (TDU) convention. Members filed into the Crowne Plaza Chicago West Loop, a unionized hotel near the city’s O’Hare International Airport, sporting shirts and jackets with the International Brotherhood of Teamsters’ (IBT) distinctive double-horse insignia. With this year’s official Teamsters convention hosted online, the enthusiasm at the in-person TDU convention was palpable.

When they got down to business, it was to discuss rank-and-file organizing within the IBT just ahead of a November election that will determine new international union leadership. The agenda included workshops and conversations about the direction of the union, the election of TDU-backed candidates to office, the activation of members, and the existential threat posed by Amazon.

Over the years, TDU, a reform caucus of just a few thousand members, has had an outsized influence on the IBT, which represents 1.4 million union members across sectors including logistics, health care, construction, transportation, and communications. “We don’t call ourselves a caucus. We call ourselves a rank-and-file movement,” TDU national organizer Ken Paff told Jacobin.

In 1989, with union leadership facing charges under the Racketeer Influenced and Corrupt Organizations (RICO) Act and amid discussions of placing the union under a federal trusteeship, TDU led a successful campaign that won members’ right to cast a direct ballot for top union officers. With IBT general president James P. Hoffa stepping down after twenty-three years in office, the election this November marks the first time a reform slate is positioned to win international leadership since former president Ron Carey (1991–97) had his election overturned on false charges of misdirecting union funds.

The current election comes down to two slates: Teamster Power, which is backed by the Hoffa old guard, and Teamsters United, a coalition group backed by TDU. Hoffa’s departure will also mark the first time an IBT president voluntarily leaves office and is not arrested or brought up on charges, Teamsters Local 804 president Vinny Perrone of New York explained. “For him, that’s impressive,” said Perrone, who is running as a trustee on the Teamsters United ticket. “But it’s been twenty-something years of concessionary contracts.”

Over the course of the convention, attendees referred to Hoffa as “asleep at the wheel,” “in bed with management,” and “setting the stage for concessions with Amazon.” One rank-and-file United Parcel Service (UPS) driver characterized his administration as “schmoozing with the company” and making “handshake deals.”

With around 340,000 UPS workers represented, the Teamsters oversee the largest private collective bargaining agreement in the United States. Candidates on the Teamsters United slate are running for leadership on a platform of fighting for a strong contract with UPS (the current one expires in 2023), working collaboratively with locals to confront employers, and organizing Amazon — the second largest employer in the United States. “I hope to see an environment where we can fight for a better union with the support of our international,” said Fernando Figueroa, a part-time package handler with UPS and a member of Teamsters Local 512 in Jacksonville, Florida.

When asked about the biggest problems they face on the job, every rank-and-file Teamster who spoke with Jacobin mentioned two issues: workplace harassment by management and the existence of 22-4s — a new classification of driver, operating on a system that was negotiated in the last contract — which many say has created a two-tiered system among truck drivers.

“Management will harass workers for all kinds of petty things,” Figueroa said. “Showing up thirty seconds late for a shift, not producing the way that UPS wants us to produce, not meeting quotas, even though our contract specifically states there are no production standards. They’ll harass people to the point of driving to their house to see if they’re home on days that they call out.”

Figueroa added that UPS management has disciplined workers with disabilities for showing up a minute late to their shift despite being unable to drive and relying on other means of transportation. He said that management has also intimidated drivers for signing petitions, harassed elderly employees for working too slowly, and fired a pregnant employee on an unsubstantiated suspicion that she helped someone steal from the company.

On the question of harassment, Derek Correia, a UPS driver with Teamsters Local 542 in San Diego, said, “Speed. They want you to go faster on routes, extra hours, especially during COVID. We worked close to seventy hours a week.” Since starting at his job in 2002, Correia said, harassment has increased, and he places some of the blame on his local. “They collude with management. We’ve had no protection, no support, no representation whatsoever,” Correia says. “I am looking for a more militant group, which I think we have in Fred Zuckerman and Sean O’Brien” who are running on the Teamsters United slate for general secretary-treasurer and general president, respectively.

“I think there’s already a formula that’s built on grassroots organizing,” Perrone said about negotiating the next UPS contract. “In my local, I’m already telling people to start putting money away for a strike because I think that’s the only thing that the company is actually going to understand.”

TDU’s model of organizing focuses on activating a militant minority within the rank and file. Incoming TDU national organizer David Levin says the purpose of their annual conventions is to “make you a more well-armed troublemaker when you go home to your locals.”

TDU, which has traditionally served as a dissident group in opposition to international leadership, would, as one supporter described it, finally have a “seat at the table” under new leadership. But conference attendees were not universally enthusiastic about the candidates at the top of the ticket. O’Brien and Zuckerman have historically been opposed to TDU. For instance, Zuckerman in the past had a “TDU Sucks” vanity plate on his car. Both candidates have since formed a coalition with TDU, which they view as an essential asset.

Despite past controversies, some view winning over Zuckerman and O’Brien as a win for TDU. “The ticket we have is a perfect reflection of society today in the sense that people’s movements, fighting workers, communities struggling to improve their own conditions are actually pushing everything in the system further to the left,” Figueroa said. “It’s a real reflection of how member involvement in unions can actually change the structure from the bottom up.”

The upcoming election results have enormous implications for the approach the Teamsters will take toward Amazon. “We need a serious strategy to organize Amazon workers into our union, and I think we have a chance at that under Sean O’Brien’s leadership,” says Gabriella Killpack, a UPS package car driver with Teamsters Local 222 in Salt Lake City, Utah.

At one Amazon workshop during this weekend’s convention, organizers mapped out the company’s operations in meticulous detail. Joe DeManuelle-Hall, an organizer and staff writer at Labor Notes, explained the built-in redundancy in Amazon’s distribution model. Because of this, he explained, a strike at one facility would have no impact on the company’s bottom line due to the fact that algorithms can track down products within a network of fulfillment centers and deliver products to customers with no disruption.

From 2015 to 2020, the percentage of Amazon packages that the company delivers itself — rather than relying on outside delivery companies — increased from 3 percent to 67 percent. As of this year, Amazon represents the fourth-largest courier by market share in the country (UPS is the first) despite only entering the market in 2013. DeManuelle-Hall described Amazon’s strategy as “an attempt to build a parallel network.”

One rank-and-file member involved in the campaign to organize Amazon described their local operation as the “scaffold of a union drive.” Organizers requested that specific details concerning tactics and strategy not be shared publicly, though TDU has proposed a number of potential organizing tactics, including a massive “salting” program which would encourage organizers to take jobs at Amazon with plans to “build shop-floor power from the inside.”

“The old guard has let organizing Amazon slip under the radar for too long,” says Killpack. To those interested in joining the fight she says, “I strongly recommend they contact the local Teamsters union to see if they have an active union campaign.”