How Other Nations Pay for Child Care. The U.S. Is an Outlier.

Rich countries contribute an average of $14,000 per year for a toddler’s care, compared with $500 in the U.S. The Democrats’ spending bill tries to shrink the gap. 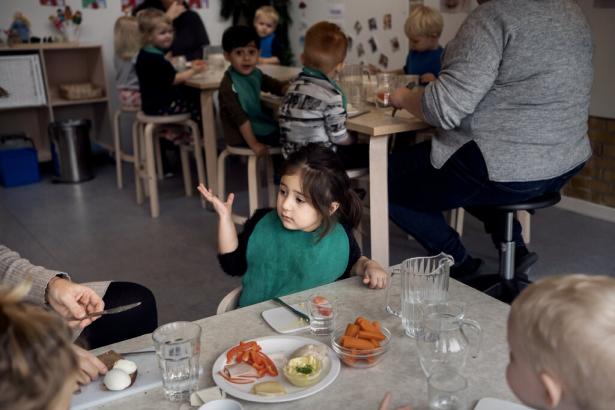 Typical 2-year-olds in Denmark attend child care during the day, where they are guaranteed a spot, and their parents pay no more than 25 percent of the cost. That guaranteed spot will remain until the children are in after-school care at age 10. If their parents choose to stay home or hire a nanny, the government helps pay for that, too.

Two-year-olds in the United States are less likely to attend formal child care. If they do, their parents pay full price — an average $1,100 a month — and compete to find a spot. If their parents stay home or find another arrangement, they are also on their own to finance it, as they will be until kindergarten.

In the developed world, the United States is an outlier in its low levels of financial support for young children’s care — something Democrats, with their safety net spending bill, are trying to change. The U.S. spends 0.2 percent of its G.D.P. on child care for children 2 and under — which amounts to about $200 a year for most families, in the form of a once-a-year tax credit for parents who pay for care. 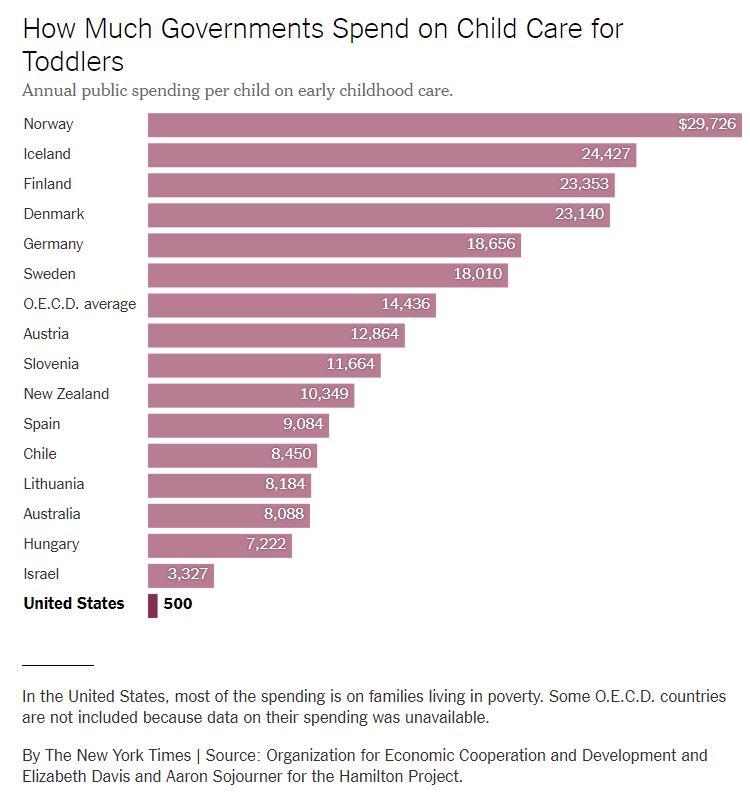 The other wealthy countries in the Organization for Economic Cooperation and Development spend an average of 0.7 percent of G.D.P. on toddlers, mainly through heavily subsidized child care. Denmark, for example, spends $23,140 annually per child on care for children 2 and under.

“We as a society, with public funding, spend so much less on children before kindergarten than once they reach kindergarten,” said Elizabeth Davis, an economist studying child care at the University of Minnesota. “And yet the science of child development shows how very important investment in the youngest ages are, and we get societal benefits from those investments.”

Congress is negotiating the details of the spending bill, and many elements are likely to be cut to decrease the cost. The current draft of the child care plan would make attendance at licensed child care centers free for the lowest-earning families, and it would cost no more than 7 percent of family income for those earning up to double the state’s median income. It would provide universal public preschool for children ages 3 and 4. And it would increase the pay of child care workers and preschool teachers to be equivalent to elementary teachers (currently, the median hourly wage for a preschool teacher of 4-year-olds is $14.67, and for a kindergarten teacher of 5-year-olds $32.80).

Among the 38 nations in the Organization for Economic Cooperation and Development, the United States is second only to Luxembourg on education spending for elementary school through college. But Americans have long had mixed feelings about whether young children should stay home with family or go to child care. Some Republicans say direct payments to parents would give them the choice to enroll in child care or stay home. Though many conservative-leaning states have public preschool, some Republicans have said they do not want the federal government involved. Some business groups oppose how the Biden spending bill would be paid for: increased taxes on businesses and wealthy Americans.

The pandemic, though, has forced the issue.

“I’ve been writing these reports saying this is a crisis for more than 30 years — it’s not new,” said Gina Adams, a senior fellow at the Urban Institute. “But the pandemic reminded people that child care is a linchpin of our economy. Parents can’t work without it. It’s gotten to a point where the costs of not investing are much, much more clear.”

Overall, federal, state and local governments spend about $1,000 a year on care for low-income children ages 2 and under, and $200 on other toddlers, according to a paper for the Hamilton Project at Brookings, by Professor Davis and Aaron Sojourner, also an economist at the University of Minnesota.

Some states and cities offer public preschool, starting at age 3 or 4. But just seven states (and the District of Columbia) serve more than half of 4-year-olds, and 14 states have no public preschool or serve less than 10 percent of children, according to the National Institute for Early Education Research.

For children under 3, only the poorest working families qualify for subsidies, through Early Head Start or the child care block grant, but fewer than one in six eligible children receive the help. For most families, the only direct government support for early care and education comes from the child and dependent care tax credit. It benefits higher earners most: The average credit is $586, and $124 for the lowest earners.

The situation is much different in many rich countries. In Europe, new parents have paid leaves of 14 months, on average, and it’s common for children to start public school at age 3. (In the preschool years, the focus in on play — toddlers aren’t sitting at desks doing worksheets.)

For children ages 1 and 2, parents are expected to pay more for child care, and there are similar tensions as in the United States about whether it’s best for children to be home with their parents, said Hans Bos, senior vice president studying education policy at the American Institutes for Research. But governments still pay a significant portion of the cost of care — including payments for stay-at-home parents in countries including Finland, South Korea and Denmark.

Nordic countries have the most generous child care systems, including free care for low-income families. In Denmark, in addition to heavily subsidized care for children up to age 10, which is mostly government-run but includes private centers and home-based care, parents of toddlers receive a quarterly child benefit of $700.

In Germany, children can attend forms of “kita” from early months through elementary school. In some places, parents pay tuition based on their income, and in others, including Berlin and Hamburg, it is free. In France, parents of babies and toddlers receive tax credits of up to 85 percent of the cost of attending child care centers called crèches or hiring home-based “childminders,” before public preschool begins at age 2 or 3.

Parents pay a much larger share of their earnings in certain other countries, but still receive more government assistance than in the United States. Japan has subsidized child care, but parents’ share of tuition is large and it is very hard to find spots. England and Ireland offer free preschool, but only for a few hours a day.

One is increasing fertility (though studies have found government policies don’t necessarily make people have more babies over the long run).

Another goal is increasing women’s labor force participation. In Europe, research shows, child care has had a bigger effect on this measure than policies like paid parental leave. Studies in the United States have also found that subsidized child care and preschool increase the chance that mothers keep working, particularly low-income women.

A third goal is ensuring that children of all backgrounds are equally prepared. Rich families can more easily afford high-quality care, which contributes to achievement gaps as early as kindergarten. Research in the United States shows that children are less likely to have formal child care if their parents are low earners, Hispanic or aren’t college graduates. Universal programs have been shown to shrink the gap in kindergarten readiness. Yet in the United States, one in three American children start kindergarten without any preschool at all.

[Claire Cain Miller writes about gender, families and the future of work for The Upshot. She joined The New York Times in 2008 and was part of a team that won a Pulitzer Prize in 2018 for public service for reporting on workplace sexual harassment issues. @clairecm • Facebook]