Farmworkers fought for years to have the legal power to unionize in New York State. Finally, in 2019, the state passed the Farm Laborers Fair Labor Practices Act, which gave agricultural and farm workers the right to collectively bargain. 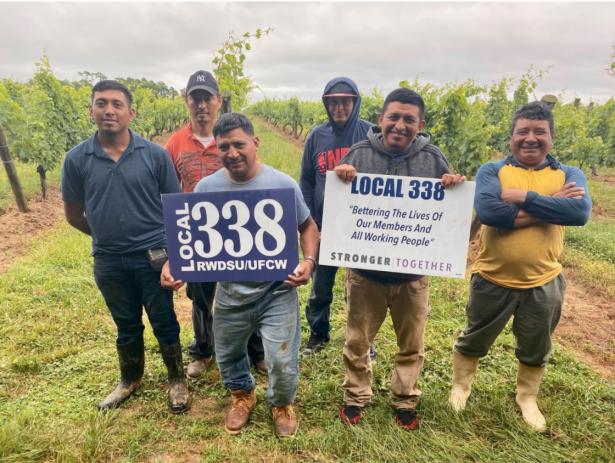 Farmworkers at Pindar Vineyards on Long Island are the first agricultural workers to organize in New York State.,RWDSU

Twelve workers at a Long Island vineyard became the first agricultural workers to form part of a labor union in New York State. On Sept. 27, the New York State Public Employment Relations Board (PERB) certified Local 338 RWDSU/UFCW, to represent these workers, who are employed at Pindar Vineyards in Peconic, New York.

This article was originally published by Documented, a nonprofit news organization that covers New York’s immigrants and the policies that affect their lives. Follow them on Facebook and Twitter, or sign up for their newsletter.

“My coworkers at Pindar and I joined Local 338 because we want dignity and respect. Our work should be valued and only by receiving equal treatment and things like sick days and paid time off to spend with our loved ones will it be,” Rodolfo M., Local 338 RWDSU/UFCW member and worker at Pindar Vineyards, said in a statement. “We know that being a union member will help us get the recognition we deserve for all of our efforts.”

Farmworkers fought for years to have the legal power to unionize in New York State. Finally, in 2019, the state passed the Farm Laborers Fair Labor Practices Act, which gave agricultural and farm workers the right to collectively bargain, and granted them workers’ compensation as well as unemployment benefits. In late May of 2021, Local 338 RWDSU/UFCW first filed to represent the Pindar Vineyards fieldworkers, the Retail, Wholesale and Department Store Union said.

State Senator Jessica Ramos, who campaigned strongly for the Farm Laborers Fair Labor Practices Act, applauded the move, saying that when farm workers were given basic rights, “we dreamt of the day workers would answer the call to organize for better wages and working conditions.”

“Welcome, Pindar Vineyards workers, to the labor family,” she added.

It has been difficult for workers to protest their conditions, farmworkers have said. The industry can be particularly brutal for them — farmworkers have an on-the-job fatality rate 20 times higher than the average worker in New York State. Studies in the past few years have shown that more than half of workers don’t speak English well, and many are undocumented.

Farms in New York employ about 55,000 people, according to the New York Farm bureau, as of the United States Department of Agriculture’s 2017 Census of Agriculture. Now, these tens of thousands of individuals might be on the path to unionize after advocates battled hard for their rights.

“It was a decades-long struggle to win farmworkers’ right to organize in this state, and now workers at Pindar Vineyards are seeing the seeds they planted come to fruition by becoming the first in the state to be recognized as a union,” said Stuart Appelbaum, President of the Retail, Wholesale and Department Store Union.

“The workers at Pindar Vineyards have made history and are the beginning of what we are sure will be a growing union presence for the state’s farmworkers.”