Pedagogy of the Occupied

How can Paulo Freire, who would have turned 100 this year, help us think the limits that Occupy encountered ten years ago? 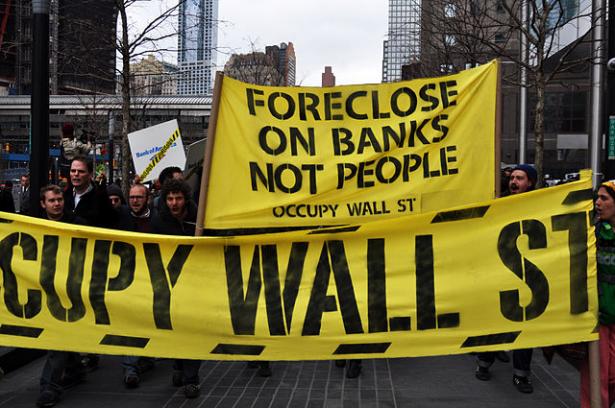 The little remarked coincidence that put the beginning of Occupy Wall Street just three days before the birthday of Paulo Freire became very visible this year when the former’s tenth anniversary and the latter’s centennial were celebrated in quick succession. This proximity invites us to think the two in connection, and allows us to find in the Brazilian educator elements with which to overcome some of the impasses that have beset Occupy and other movements since.

Most people remember Freire as someone who had a political lesson to teach about pedagogy. If education is treated as the transmission of a set of contents, he warned, it does not truly emancipate, but rather reproduces a division between those who know and those who do not. Liberation supposes the capacity to think the world afresh, and an education that does not awaken that capacity cannot be called liberating.

To stop there, however, is to overlook another aspect of Freire’s thinking: he also had a pedagogical lesson to teach about politics. The latter, which followed from the first, was that the dialogical method was the only one suitable for a "revolutionary leadership". This expression, which recurs a total of 31 times in Pedagogy of the Oppressed, probably sounds jarring to everyone whose image of Freire is that of a fierce enemy of vanguardism who was critical of the very idea of leaders. After all, what place can leadership have in a method that assumes the equality of all? To understand this, it is necessary to understand both what Freire means by equality and what he understands as leadership.

Equality is, first of all, the equality of a potential: everyone is capable of learning and thinking critically, everyone is endowed with the capacity to become a conscious participant in the construction of the world. But this does not exclude actual differences. On the contrary: precisely because everyone can learn and everyone will find themselves in different situations, different types of knowledge exist. Yet this also means that some essential skills and knowledge about the way the world is structured are unequally distributed. If equality is not to remain just a potential, the conditions that create that unequal distribution of opportunities to actualize it must be changed. The goal of realizing the first equality therefore supposes the goal of realizing another one: material equality among people. Now, the awareness of this necessity is itself badly distributed; so, if those who have it wish to share it with others, what are the different theoretical alternatives through which they can understand their position in relation to others’?

The first is to conclude that those who have more must teach those who have less, full stop. Freire rejects it because, even if well intentioned, it slips into the paternalistic division between those who know and those who do not and treats liberation as a transfer of knowledge from one group to the other. “Attempting to liberate the oppressed without their reflective participation in the act of liberation is to treat them as objects which must be saved,” and thus also “masses which can be manipulated.”

The second is to deny that there are any differences between knowledges: all knowledge about all things is equally valid. This is very tempting, as it creates in a single gesture the equality that one had as a long-term goal. But it has a problem: it limits our ability to refer to a shared world, which is indispensable to the very possibility of a political practice. For if you think I am exploited and I do not, you cannot appeal to my objective interests as opposed to my subjective perception, because neither you nor I have a privileged access to objectivity. My interests are whatever I identify as such and nothing more. Any attempt at persuasion is thus presumptuous, disrespectful of difference and, ultimately, a form of violence.

The third alternative is to reverse the game: yes, there are knowledge differentials, but they travel in the opposite direction; it is the oppressed who know everything and the oppressors, including those who fancy themselves as revolutionaries, who know nothing. Again, the appeal of this (mental, if not material) redress of the world’s injustices is obvious. The cost of following it, however, is that we must essentialize the oppressed: they all think the same (at least tendentially), and what they really think stays the same regardless of their interactions with the world. In doing so, besides, we implicitly make the same kind of claim that we criticize would-be leaders for: we are the ones who really know what the oppressed think, and we know that it really is the truth. Finally, it was the unclear what kind of political interventions follow from it apart from boosting the voices of people who correspond to our idea of what the people think.

Occupy and the whole cycle of struggles that began in 2011 were haunted by the specter of a double democratic deficit: the one that turned left and right-wing parties in several countries into mere vehicles for the interests of finance after the 2008 crisis, and the one at the center of the left’s traumatic authoritarian experiences in the 20th century. In the large general assemblies that began to sprout in squares all over the world, those movements found a counterpoint, perhaps even an antidote, to that predicament. Yet while those assemblies were hugely significant in giving a voice to those who felt like they had none and making audible realities that had been silenced, they were noticeably less successful when it came to building consensus, constituting new identities or forging shared directions. In part this was because many people believed that the only way to avoid the mistakes associated with the first of the three alternatives above was to opt for a combination of the other two, and saw any deviation from this as intrinsically suspicious. No doubt there were even those who invoked Paulo Freire to justify that choice.

Yet Freire’s alternative is in fact a fourth one. It consists in saying that knowledge differentials exist, but they are distributed in such a way that there is no great division between those who know and those who do not. It is not that all knowledges are equal, but rather that different groups and individuals have more or less, better or worse knowledge about different things, and so everyone has something to learn from everyone, and everyone has something to teach. Since political processes demand knowledges of different kinds, and “not even the best-intentioned leadership can bestow independence as a gift,” they cannot be a simple transfer of knowledge from one group to another; they require autonomy and dialogue. This is quite different from saying that “the people already know” or “everyone has their own truth”. As Freire summarizes it, the point is rather that “no one teaches another, nor is anyone self-taught. People teach each other, mediated by the world.”

What is the notion of leadership that follows from this? It is not a position belonging to a fixed group –– the vanguard that knows better than others in every situation and department –– but a function that can be exercised by anyone who, in a given context, possesses a knowledge differential that makes them capable of triggering a collective learning process. This can come from inside or outside a social group, it can be individual or collective, short-lived or long-lasting; since no-one is self-taught, without this initial difference, nothing would ever happen.

As we celebrate the achievements and assess the shortcomings of Occupy and the “movement of the squares”, it is important to remember this Freirean lesson: the potential for equality among people cannot be actualized by either pretending that differences do not exist or by absolutizing them to the point that questioning or trying to persuade others become suspicious, virtually violent acts. On the contrary, it is by starting from existing differences, but without giving up on dialogue or resorting to manipulation and imposition, that an emancipatory process can take place.

Yet are we not then making Freire into a counterintuitive bedfellow of those who lamented at the time that what Occupy lacked was a proper revolutionary leadership? Again, it all depends on how one understands those words. People who want and believe themselves qualified to lead are never lacking, and there certainly were plenty around the “movement of the squares”. The question is, of course, that this is not what constitutes a revolutionary leadership for Freire. What is it, then? Fundamentally, the capacity to make oneself followed, that is, to point a direction which others regard as valid, useful, important; and to do so without imposing or manipulating, through open dialogue, reciprocity and persuasion.

If this is so, the first quality that leaders need is knowing how to listen. Not to repeat what is already being said, but to know where to introduce a different note, where to put the tension that might spark a collective learning process –– and when to stay quiet. If the movements of the past decade were so allergic to leadership, it is because they did not think that it could also mean this. As a consequence, they were often left with an impoverished notion of democracy: one that made it into an arena for the expression of individual differences treated as absolutes, rather than a space for mutual influence and exchange –– in which people enter to change others and be changed in turn.

Rodrigo Nunes is a professor of philosophy at the Pontifical Catholic University of Rio de Janeiro (PUC-Rio), Brazil, and author of Neither Vertical Nor Horizontal: A Theory of Political Organization.