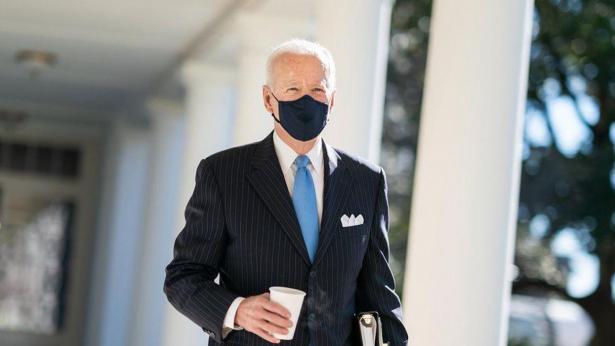 President Joe Biden walks with a cup of coffee Tuesday, March 2, 2021, along the Colonnade of the White House to the Oval Office., (Official White House Photo by Adam Schultz)

Calling into question widespread perceptions of lower-income Americans and their level of political engagement, a new study released Friday detailed the high turnout among poor voters in the November 2020 elections—particularly in battleground states which helped deliver victories for President Joe Biden and Democrats in the Senate and House—following a concerted effort by campaigners to engage with low-income communities regarding the issues that mattered to them in the election.

Released by the Poor People's Campaign: A National Call for Moral Revival (PPC:NCMR); the Kairos Center for Religions, Rights, and Social Justice; and Repairers of the Breach, the study shows that of the 168 million Americans who cast ballots last year, 59 million, or 35%, had an estimated annual household income of less than $50,000, classifying them as poor or low-income.

According to the report, titled "Waking the Sleeping Giant: Low-Income Voters and the 2020 Elections" and written by Kairos Center policy director Shailly Gupta Barnes, those voters were among the Americans that the Poor People's Campaign reached out to last year when it held a non-partisan voter outreach drive across 16 states including Arizona, Georgia, Michigan, Nevada, Pennsylvania, Texas, and Wisconsin.

The organization reached over 2.1 million voters, with campaigners speaking with them about "an agenda that includes living wages, healthcare, strong anti-poverty programs, voting rights, and policies that fully address injustices of systemic racism, poverty, ecological devastation, and the war economy," according to the report.  The Poor People's Campaign found "that the reason poor and low-income voters participate in elections at lower rates is not because they have no interest in politics, but because politics is not interested in them."

"They do not hear their needs and demands from candidates or feel that their votes matter," wrote Rev. Dr. William Barber II and Rev. Dr. Liz Theoharis, co-chairs of the Poor People's Campaign, in the foreward to the report. "They are less likely to vote because of illness, disability, or transportation issues, not to mention the rise of voter suppression laws—all systemic barriers rather than individual failures."

"Intentional efforts to engage these voter" in the leadup to the 2020 election,contact the groups found, were key to turning out low-income voters in states where Biden's margin of victory was near or less than 3%, including:

"While the data cannot be used to claim that being contacted by PPC:NCMR was the only factor that drove them to vote, we can say that our efforts to directly reach out to low-income, infrequent voters improved their turnout rates in these states," the report reads.

The groups highlighted the case of Georgia, which was carried by Biden—marking the first Democratic presidential victory in the southern state since 1992. Outreach by the Poor People's Campaign helped encourage more than 39,000 Georgians who didn't vote in 2016 to cast ballots last year—"accounting for more than three times the final margin of victory for the presidential contest in the state."

The statistics present "a challenge to the media-driven narrative that emerged out of 2016 and before, i.e., that white low-income voters are the de facto base of the Republican Party and delivered Donald Trump into the White House," wrote Gupta Barnes.

Though the Poor People's Campaign made an intentional effort in 2020 to reach low-income voters, listen to their concerns, and urge them to turn out in the elections, the report notes that legislative action must be taken to turn last year's high turnout among poor Americans into a long-term reality.

"To realize the potential of the low-income electorate, our voting infrastructure must be expanded to encourage these voters to both register and vote," the report reads.

As Common Dreams has reported this year, the PPCNCMR has campaigned extensively to urge the passage of the For the People Act, which would outlaw partisan gerrymandering, expand early voting, establish a national automatic voter registration system, and take other steps to strengthen the country's election system.

"While mechanisms to increase registration are important for low-income voters, there is an even greater need for policies and legislation that increase their ability to cast a ballot and actually vote," wrote Gupta Barnes.

Additionally, the report says, Democrats must identify—and pass—"an agenda that appeals to important concerns of low-income voters across race, that is, issues like raising hourly wages, stimulus payments, paid leave, housing, and healthcare."

"According to exit polls, 72% of Americans said they would prefer a government-run healthcare plan and more than 70% supported raising the minimum wage, including 62% of Republicans," the report reads. "In Florida, the $15/hour minimum wage referendum got more votes than either of the two presidential candidates."

The report comes as progressives in Congress are pushing back against corporate Democrats' claims that the Build Back Better Act—the spending package which would invest $3.5 trillion in climate action, child care, affordable housing, and other measures to help lower- and middle-income people—is unaffordable.

As Common Dreams reported on Tuesday, the Poor People's Campaign held a press conference on Capitol Hill this week to demand the legislation's passage.

The report, wrote Gupta Barnes, "underscores why the needs and concerns of low-income voters must be brought more fully into our political discourse, platforms, and campaigns—and why candidates who are elected on these platforms must live up to their campaign promises."