While abortion has long been aggressively criminalized in Brazil, in the past few years, anti-abortion zeal has reached a fever pitch. In response, abortion activist networks support and guide women through at-home procedures. 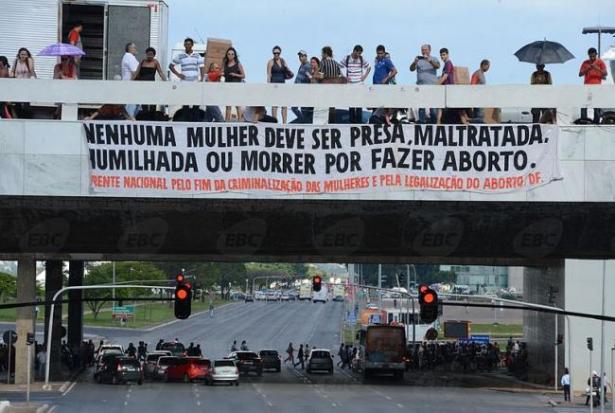 A banner calling for legal abortion in Brazil reads “No woman should be imprisoned, mistreated, humiliated, or die for having an abortion.” ,Wikimedia Commons

Last month, when Taís Oliveira* found out she was pregnant, she got in her car and cried. A single mother living in Salvador da Bahia, Brazil, Taís had promised herself she would never raise a child alone again. The next day she began her search for an abortion. Under President Jair Bolsonaro’s radically anti-choice government, however, obtaining one through either legal or illegal means would be difficult. With scores of religious conservatives in Congress and at the helm of the public agencies, anti-abortion surveillance pervades.

Taís’s circumstances disqualified her from a legal abortion. Abortion is only legal in Brazil in the case of rape, risk to the woman’s life, and fetal anencephaly. So, like tens of thousands of Brazilian women this year, she began to research abortion methods online. First, she tried different teas to “bring down her period,” but they only made her violently sick. Then she searched for the abortion medication Cytotec and found a number of websites that sold the drug, but she hesitated to make the purchase. The pills were expensive, and she was afraid of getting conned. Then, in a pro-choice Facebook group, she asked one of the members for help. A woman gave her the number of Sofia Barros, a lawyer and activist.

Over the next few days, Taís exchanged dozens of WhatsApp messages with Sofia. Sofia explained how Cytotec worked, how much the pills would cost and how to use them. She instructed Taís on how many she would need based on how developed her pregnancy was and showed her where to find information about pharmaceutical abortion online. A few days later, after transferring the cash to Sofia’s account, the pills arrived in a box at Taís’s door. Over the next several hours, Taís would manage her abortion with Sofia over the phone.

“She guided me through the whole process,” she said a week after successfully completing the procedure. “I was scared. I’m so happy it’s over.”

An Activist in the Trenches

I met Sofia over WhatsApp in September 2020, after getting her number from a mutual friend. I was nervous at first, assuming she wouldn’t want to talk about her work with an anthropologist. But Sofia saw our weekly conversations as an opportunity to publicize information about the dismal conditions in which women access, and fail to access, abortion care in Brazil, a cause she deeply cares about. With Sofia’s permission, and after promising to safeguard her identity and that of her clients, I began conducting interviews with her and some of the women she has helped.

Sofia, who is Black and in her late forties, carries out this informal work in spite of the risk it poses to her safety and wellbeing. She assured me that she makes no profit in this role, though some in her position do. Her work has earned her respect and notoriety among feminists, professors, and others in abortion activism networks. One participant in the National Front for Abortion Legalization in Minas Gerais who is organizing this year’s protests for International Safe Abortion Day on September 28 said, “Sofia is a militant. She’s an icon to a lot of us.”

While some activist collectives and individuals resell misoprostol that they purchase from Uruguay or Mexico, Sofia obtains the tablets from a doctor and nurse inside the medical system—the same nurse, in fact, who sold Sofia the misoprostol pills she used to terminate her own pregnancy some 15 years ago. Although the structures of these informal networks of care are constantly adapting to changing conditions, they have been around for many years.

The Personal Costs of Increased Intimidation

For decades, Latin American activists have helped pregnant people obtain misoprostol (commonly known as Cytotec), shared information about medication abortion, and established guides for those who accompany women as they induce their abortions. In Brazil, these informal encounters between activists and pregnant people are crucial to the ways in which abortion is practiced in everyday life. But as Sofia and the women she aids know firsthand, these improvised interactions are also shrouded in fear, mistrust, and uncertainty. They belie an uneven social landscape whereby wealthier women can access safe procedures costing thousands of Brazilian reals in private (if illicit) clinics, or travel to other countries, while poor women are left to navigate uncertain Internet-scapes where they must distinguish between mutual aid networks, scammers, and police.

Cássia de Moraes, a 27-year-old student and minimum-wage worker in Belo Horizonte, said that she was paranoid about being arrested in the days leading up to and following her abortion.

“I thought, every day, am I going to get arrested? Are the doctors going to report me to the police? Is Sofia really who she says she is?” The current government, and the climate of vigilante justice surrounding abortion in Brazil, were central to her fears. “With the chaos that we’re living in Brazil – this antidemocratic government in power – you never know what might happen.”

While abortion has long been aggressively criminalized in Brazil, in the past few years, anti-abortion zeal has reached a fever pitch. More than at any other time in Brazilian history, elected officials are vocal supporters of the pro-birth movement. This year, the National Secretary of Primary Health Care, Rafael Câmara, spoke at the national “March for Life.” Câmara falsely claimed that unsafe abortion doesn’t kill women and that Black women do not die at higher rates from the procedure than white women. A year earlier, in September 2020, the minister for Women, Family and Human Rights, Damares Alves, tried to stop a 10-year-old girl who was raped by her uncle in Espíritu Santo from having an abortion. Alves suggested that the girl, whose placenta had detached and was at risk of losing her life, should have delivered the baby via C-section. Bolsonaro himself has said that under his government “there will be no abortion in Brazil.” The increased intensity of the state’s gaze, and the corresponding jeopardy it brings, impact women’s access to reproductive care in significant ways, but ultimately will not eliminate the sense of solidarity among activists or the networks of care that they build. This important work goes on, albeit in a climate of greater risk and precarity.

Sofia used to help many more people, but she has now restricted her activity to about 50 women each year. Government intimidation is too much, she said. Last month, Sofia called me on WhatsApp.

“Did you see the article I sent you? A veterinary student was just arrested for selling Cytotec in Salvador,” she said. “I keep telling these girls not to share their phone numbers on Facebook, but they don’t listen.” Since Bolsonaro became president, Sofia has taken measures to protect herself online. “I ask the girls, ‘don’t share my name or number on public groups, only share it with people you know.’ Now, when someone reaches out to me, they have to tell me who referred them. These are dangerous times we are living in.”

Bolsonaro’s administration has used its power in various ways to cut off access to abortion. Under the cover of pandemic chaos, many of the hospitals that had provided legal abortions lapsed in their services. Around the same time, the government began enforcing new guidelines stipulating that rape victims must file formal complaints with police before obtaining their procedures, a tactic that discourages victims from seeking legal abortions. To further disrupt access to abortion, authorities also sought to intimidate reproductive rights activists online. In 2019, Alves, the aforementioned minister of Women, Family and Human Rights, threatened to take legal action against the feminist magazine AzMina for publishing information about how to induce a medication abortion on their website. Although the publication of such information is not yet illegal, the mere threat can have a chilling effect on open communication.

Saving Lives in the Breach

Ultimately, the ability to purchase misoprostol pills online gives women the ability to choose between illegality and an increased risk of death. Since the medication became a widespread informal method, it has slashed abortion-related mortality. Mariana Ribeiro from Goiânia, who purchased misoprostol from Sofia in 2015, said Sofia saved her life. Mariana was just 18 when she got pregnant and would have done anything in her power to end the pregnancy. Had she not had access to misoprostol she would have likely used a much more dangerous method.

Hundreds of Brazilian women die from using dangerous methods each year. Lane Costas, a 52-year-old housekeeper, described in an emotional exchange how a dangerous clandestine abortion took her niece’s life. Her niece was just 26 when she died.

“A nurse from our neighborhood health outpost did it,” Lane said. “but he didn’t really know how. They don’t train for that here. He stuck a plastic stick in her uterus, and it got infected. She had a generalized infection for five days before she died. At the hospital they said she had 18 cardiac arrests before falling into a coma. She left behind a five-year-old daughter,” Lane said, showing me a photo of her niece’s daughter.

The Path to a More Just Future

In the past ten years, even the most modest attempts to make safe abortion more accessible in Brazil have been met with powerful blowback from religious conservatives in Congress. And while Lula da Silva’s and Dilma Rouseff’s administrations strengthened access to abortion in cases in which it was already legal, they were largely hamstrung in their efforts to make abortion accessible to anyone who needed it. The winner of next year’s presidential election will matter greatly for women’s rights in Brazil, but even if Lula da Silva takes office again, he will not be able to do much for abortion policy without a powerful movement behind him.

In Argentina and Mexico, the coalescence of leftist governments and strong pro-choice movements in recent years have been crucial to tipping the scales. In Brazil, these movements, confronted by much more powerful and resource-rich Christian pro-birth factions, have struggled to gain ground. Today, as activists hold rallies and marches across the nation for International Safe Abortion day, they are building momentum to enact broad social change and usher in a new era of political reform. In the meantime, Sofia and activists like her will continue to help women get the abortions they need.

*All the names in this article have been changed.

Alejandra Marks is a Ph.D. candidate in anthropology at Tulane University. Her research focuses on recent transformations in abortion policy and access in Latin America and on unofficial and official networks of reproductive care. Twitter @marksaleja