In a video on Facebook, actor Alec Baldwin encouraged Hollywood workers to fight bad labor conditions. A commenter quickly accused his own production. 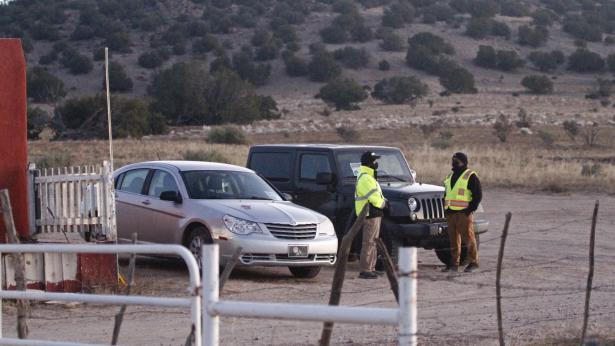 Fight disinformation. Get a daily recap of the facts that matter. Sign up for the free Mother Jones newsletter.

The camera crew had walked off the set earlier that day in protest of working conditions. Producers threatened to call security on them before bringing in non-union replacements. The prop gun had already misfired multiple times. These are just some of the details emerging about the events that led up to Alec Baldwin fatally shooting cinematographer Halyna Hutchins on Thursday, according to a new Los Angeles Times report.

The shooting is first and foremost a tragedy. Hutchins, who was 42, leaves behind a husband and a 9-year-old son. Director Joel Souza was hospitalized.

But the incident also begs the question how these conditions are able to persist on sets. The events that prompted workers to walk off the set in New Mexico appear to have been detailed in a series of Facebook replies written before the shooting. A person who identified themselves as a member of the camera crew on Rust, the movie Baldwin was co-producing and starring in, wrote a series of posts about how the crew was being treated like “Absolute dog shit.”

In the comments, a person who identified themselves as a member of the camera crew on “Rust” said the crew was being treated like “Absolute dog shit.”

The posts were written in response to a video of Baldwin expressing his solidarity with Hollywood’s blue-collar workforce, which is now deciding whether to ratify a labor agreement reached on Saturday between producers and the leaders of their union, the International Alliance of Theatrical Stage Employees. “I want to say to the people in IATSE, do what you need to do,” Baldwin said about the upcoming vote. “You don’t like that contract? You think the contract could be better? You want to go on strike? Go on strike.”

Under the video, the crew member, whose Facebook page identifies them as a member of IATSE Local 600, highlights conditions similar to the ones described in the Times:

At the moment I’m fighting to get my crew, on this movie, hotel rooms when we go long or are too tired to drive the hour back from location to albuquerque. They either say no or offer a garbage roadside motel that’s used as a homeless shelter. In fact the line producer on the flick complained the motel she booked charges her 10 bucks more per night than the homeless. They haven’t even paid the crew a proper check.

“We left,” the crew member wrote in another reply posted before the shooting on Thursday. “I’m sure y’all will hear about it today.” The Times article names three anonymous sources that say six hours after the crew walked off Baldwin fired the shot that killed Hutchins.

The event is a reminder of how little we usually hear about the conditions that recently led IATSE’s members to authorize a strike for the first time in the union’s 128-year history. The results of the vote were overwhelming, with nearly 90 percent of members casting ballots and 98 percent of those members voting to authorize a strike. Even before Thursday, reaction to the deal it led to had been mixed. Many objected to the fact that it would still allow for workdays as long as 14 hours, not including time spent commuting. Although it may still end up being ratified, news of the shooting is likely to lead more people to oppose the agreement.

LOOKING FOR NEWS YOU CAN TRUST?

Subscribe to the Mother Jones Daily to have our top stories delivered directly to your inbox.

HERE ARE THE FACTS:

Our fall fundraising drive is off to a rough start, and we very much need to raise $250,000 in the next couple of weeks. If you value the journalism you get from Mother Jones, please help us do it with a donation today.

As we wrote over the summer, traffic has been down at Mother Jones and a lot of sites with many people thinking news is less important now that Donald Trump is no longer president. But if you're reading this, you're not one of those people, and we're hoping we can rally support from folks like you who really get why our reporting matters right now. And that's how it's always worked: For 45 years now, a relatively small group of readers (compared to everyone we reach) who pitch in from time to time has allowed Mother Jones to do the type of journalism the moment demands and keep it free for everyone else.

Please pitch in with a donation during our fall fundraising drive if you can. We can't afford to come up short, and there's still a long way to go by November 5.