For First Time in Public, a Detainee Describes Torture at C.I.A. Black Sites

In a sentencing hearing, Majid Khan, a Pakistani who lived in suburban Baltimore before joining Al Qaeda, detailed dungeonlike conditions and episodes of abuse. 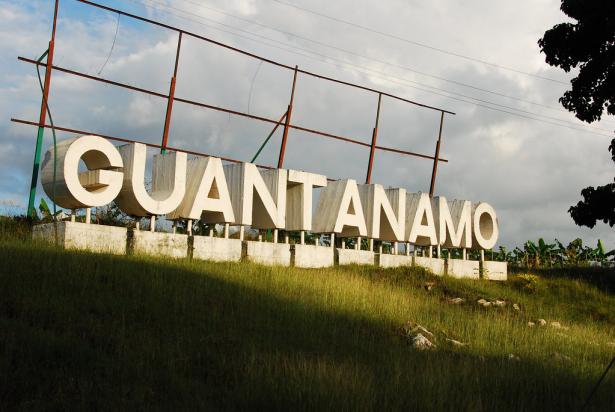 "welcome to Guantanamo..." by Paul Keller,licensed under CC BY 2.0

GUANTÁNAMO BAY NAVAL BASE, Cuba — A suburban Baltimore high school graduate turned Al Qaeda courier, speaking to a military jury for the first time, gave a detailed account this week of the brutal forced feedings, crude waterboarding and other physical and sexual abuse he endured during his 2003 to 2006 detention in the C.I.A.’s overseas prison network.

He spoke about dungeonlike conditions, humiliating stretches of nudity with only a hood on his head, sometimes while his arms were chained in ways that made sleep impossible, and being intentionally nearly drowned in icy cold water in tubs at two sites, once while a C.I.A. interrogator counted down from 10 before water was poured into his nose and mouth.

Soon after his capture in Pakistan in March 2003, Mr. Khan said, he cooperated with his captors, telling them everything he knew, with the hope of release. “Instead, the more I cooperated, the more I was tortured,” he said.

So, like other victims of torture, he said he manufactured tales that his captors wanted to hear: “I lied just to make the abuse stop.”

Mr. Khan offered the dark accounting Thursday evening to a jury of eight U.S. military officers who on Friday deliberated for less than three hours and sentenced him to 26 years in prison, starting from his guilty plea in February 2012.

But the sentence is largely symbolic, a military commission requirement.

Unknown to the jurors, Mr. Khan and his lawyers reached a secret deal this year with a senior Pentagon official in which his actual sentence could end as early as February and no later than February 2025 because Mr. Khan became a government cooperator upon pleading guilty.

Jurors were told they could sentence Mr. Khan in a range of 25 to 40 years for four terrorism charges, including murder in violation of the law of war, for delivering $50,000 from Pakistan to an Al Qaeda affiliate in early 2003. The money was used in a deadly bombing of a Marriott hotel in Jakarta, Indonesia, in August 2003, while Mr. Khan was a prisoner of the C.I.A.

He also admitted to plotting a number of other crimes with Khalid Shaikh Mohammed, the accused mastermind of the Sept. 11 attacks, notably by wearing a suicide vest in a failed effort in 2002 to assassinate the president of Pakistan at the time, Pervez Musharraf, a U.S. ally in the war on terrorism.

The lead prosecutor, Col. Walter Foster IV of the Army, asked the panel to focus on the 11 people who were killed and the dozens wounded in the Marriott attack. He said Mr. Khan “went willingly to jihad and Al Qaeda” and “only stopped when he was captured.” He conceded that Mr. Khan got “extremely rough treatment” in C.I.A. custody but said he “is still alive,” which is “a luxury” the victims do not have.

Mr. Khan’s lawyer, Maj. Michael J. Lyness, emphasized the prisoner’s declarations of contrition, long-running cooperation with the government and desire to return to society as a peaceful father to a daughter born after he was arrested.

Major Lyness was far more blunt about the prisoner’s “rough treatment,” which he called “heinous and vile acts of torture.”

“Majid was raped at the hands of the U.S. government,” the Army major told the panel of more senior officers. “He told them everything from the beginning.”

Sentencing was delayed for nearly a decade to give Mr. Khan time and opportunity to cooperate with federal and military prosecutors, so far behind the scenes, in federal and military terrorism cases. In the intervening years, prosecutors and defense lawyers clashed in court filings over who would be called to testify about Mr. Khan’s abuse in C.I.A. custody, and how. 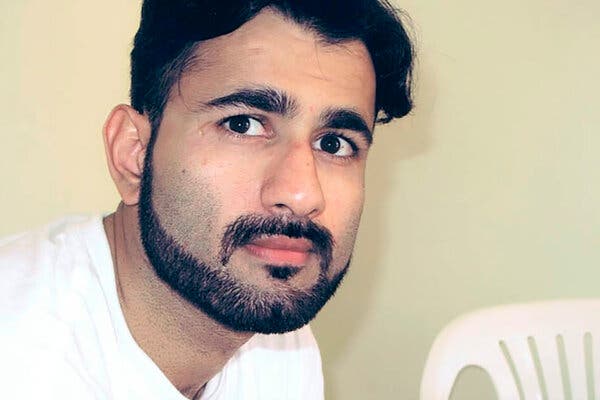 “The more I cooperated, the more I was tortured,” said Mr. Khan, shown in a 2018 photo, who is now cooperating with the government.Credit...Center for Constitutional Rights

In court on Thursday, Mr. Khan read from a carefully worded 39-page account that did not identify C.I.A. agents or the countries and foreign intelligence agencies that had a role in his secret detention at black sites — information that is protected at the national security court. He expressed remorse for hurting people through his embrace of radical Islam and Al Qaeda, but also found a way around a labyrinth of U.S. intelligence classifications to realize a decade-long ambition to tell the world what U.S. agents had done to him.

“To those who tortured me, I forgive you,” he said, noting that while he was in custody he had rejected Al Qaeda, terrorism, “violence and hatred.”

“I hope in the day of judgment that Allah will do the same for you and for me. I ask forgiveness from those whom I have wronged and I have hurt.”

Thursday was an emotional day for Mr. Khan. His father, Ali, and a sister sat behind the court in a gallery, seeing him in person for the first time since he left the United States and joined Al Qaeda after the Sept. 11 attacks. They were 50 feet from him and it took several minutes before they realized the now balding middle-age man with a gray goatee inside the court chamber was their son and brother.

Later they were reunited somewhere on the court compound, and Mr. Khan was allowed to hug his father and sister.

He juxtaposed his remarks of regret with previously unheard details of what happened to him at the hands of the United States, the country his parents and siblings adopted by becoming citizens even as he did not.

His father wept through long stretches of the descriptions, at times hiding his head in his hands, while his sister, also tearful, tried to comfort him.

The jury of Marine, Navy and Army officers watched and listened soberly, and were apparently touched by the story. In a surprise, the Navy captain who served as jury foreman announced that he drafted a proposal to the overseer of military commissions to grant Mr. Khan clemency. Seven of the eight jurors signed it.Mr. Khan gained attention with the release of a 2014 study of the C.I.A. program by the Senate Intelligence Committee that said, after he refused to eat, his captors “infused” a purée of his lunch through his anus. The C.I.A. called it rectal refeeding. Mr. Khan called it rape.

The C.I.A. pumped water up the rectum of prisoners who would not follow a command to drink. Mr. Khan said this was done to him with “green garden hoses.”

“They connected one end to the faucet, put the other in my rectum and they turned on the water,” he said, adding that he lost control of his bowels after those episodes and, to this day, has hemorrhoids.

He spoke about failed and sadistic responses to his hunger strikes and other acts of rebellion. Medics would roughly insert a feeding tube up his nose and down his throat. He would try to bite it off and, in at least one instance, he said, a C.I.A. officer used a plunger to force food inside his stomach, a technique that caused stomach cramps and diarrhea.

The intelligence agency declined Thursday to comment on the descriptions offered in the hearing but noted that its detention and interrogation program ended in 2009.

Mr. Khan also said he received beatings while nude and spent long stretches in the dark and in chains — at times shackled to a wall and crouching “like a dog,” or with his arms extended high above his head and chained to a beam inside his cell.

Before the C.I.A. moved him from one prison to another, he said, a medic inserted an enema and then put him in a diaper held in place by duct tape so he would not need a bathroom break during flights. For one brutal transfer, he said, guards used duct tape to blindfold him. Once in his new cell, he removed the diaper but found peeling the tape off his face “especially painful because it ripped off my eyebrows and eyelashes.”

While held in a Muslim country, he said, his captors allowed him to pray. But at times the Americans did not.

Earlier accounts released by his lawyers said he was so sleep deprived for a time that he began to hallucinate. He described the experience: images of a cow and a giant lizard advancing on him inside a cell while he was chained to a beam above his head. He tried to kick them away but lost his balance, causing his chains to jerk him.

Lawyers sought permission to bring Mr. Khan’s wife and daughter to Guantánamo but the commander of the military’s Southern Command, which oversees prison operations, opposed their attendance. Like Mr. Khan, who acquired permanent resident status as a boy in the United States but never became a U.S. citizen, his wife and daughter are citizens of Pakistan.

Mr. Khan began by telling the jury that he was born in Saudi Arabia and was raised in Pakistan, the youngest son of eight siblings, until his father acquired a gas station in Maryland and moved the family to the United States when he was 16. He graduated from a high school in suburban Baltimore and was working for a telecommunications contractor that managed the Pentagon phone system at the time of the Sept. 11 attacks.

He described the attacks and the death of his mother months earlier in 2001 as a turning point in his life.

Until then, he said, he had straddled two worlds: his traditional Pakistani family life and that of an American teenager who “smoked weed occasionally and had my share of girlfriends,” both of which he hid from his mother. After she died, he said, he was drawn to practicing Islam.

He rejected the explanation that Muslims had carried out the attack, “thinking that this was just another way the universe was kicking me while I was down, making me question my faith in Islam.”During a family trip to Pakistan in 2002 — in which both he and his sister found spouses in arranged marriages — he encountered relatives, cousins and an uncle who had in earlier years joined the jihad in Afghanistan and had ties to Al Qaeda.

“I was lost and vulnerable, and they went after me,” he said, including by showing him “propaganda videos” about the detention operation at Guantánamo, the base where he would be transferred for trial in 2006.

Carol Rosenberg has been covering the U.S. naval base at Guantánamo Bay, including detention operations and military commissions, since the first prisoners were brought there from Afghanistan in January 2002. She worked as a metro, national and foreign correspondent with a focus on coverage of conflict in the Middle East for The Miami Herald from 1990 to 2019.  @carolrosenberg • Facebook

Get the best of The Times in your inbox.