“The Constitution of the United States protects American citizens’ rights to stand on the side of a road and call a scab a scab,” United Mine Workers President Cecil Roberts said in response to a circuit court restraining order. 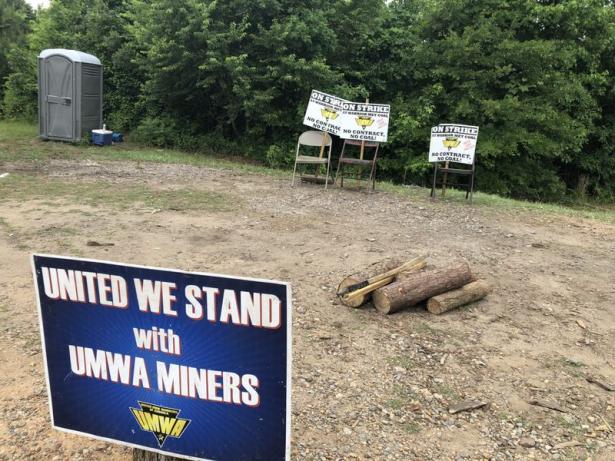 A few empty chairs sit with picket signs across from Warrior Met Coal offices in Brookwood, Ala., Friday, June 4, 2021. About 1,100 miners and workers have been striking for more than two months, seeking better pay and benefits., William Thornton / wthornton@al.com

A Tuscaloosa County circuit judge has issued a restraining order against picket line activity by the United Mine Workers of America at Warrior Met Coal.

It prohibits picketing “or other activity” within 300 yards of 12 different locations owned by Warrior Met Coal in Tuscaloosa County, including mines and offices.

The three-page order also prohibits “in any manner interfering with, hindering or obstructing, by threats, intimidation or acts of violence, the conduct and operation of Warrior’s business and supporting activities.”

That includes delivery of supplies, workers entering property, lying in front of entrances, or using obstructions. Other activity prohibited includes tailgating cars coming to or leaving the company property, use of flashlights to distract, or using objects to damage vehicles.

The order lasts through Nov. 5 but can be extended, and it calls for local or state law enforcement to ensure its compliance. The action comes almost eight months into the strike, which began April 1 when about 1,100 miners walked off the job.

The United Mine Workers of America International President Cecil E. Roberts said the order contains provisions that are “unconstitutional.”

Roberts said he is continuing to call for talks with the company to resolve the strike.

“Let me be clear: We remain ready to engage in serious and good-faith negotiations to resolve this dispute, but this (temporary restraining order) will not stop our strike,” he said. “We are far stronger than the mere location of our picket lines.”

Last month, the union called attention to the use of the Highway Patrol Division of the Alabama Law Enforcement Agency to escort workers past the line.

In a statement, Warrior Met Coal said it is “focused on maintaining the safety of all employees and the community at large.”

Earlier this week, the company issued a statement saying the level of violence taking place along the picket line in Tuscaloosa County in the strike had “reached a dangerous level over the last week.” The company also released video of car and truck windows being smashed that it says happened to workers attempting to cross the picket line.

In May, nearly a dozen miners were arrested during a protest outside a mine. Striking miners in June reported at least three instances of violence along picket lines.

Warrior Met Coal said that month that it was granted a court-ordered injunction to maintain a safe environment for its employees, “including those actively at work and those currently on strike.”

The company also offered a reward for information on damage to electrical transmission and distribution equipment on the company’s property.

The current agreement with the union was negotiated as Warrior Met emerged from the bankruptcy proceedings of the former Walter Energy, which declared bankruptcy in 2016.

Union members say they made numerous concessions in pay, benefits, holidays, overtime and in other areas to keep the company going and get it out of bankruptcy.

William Thornton is the business reporter for al.com. His e-mail is wthornton@al.com.