We Urgently Need a Transformative Approach to Public Safety 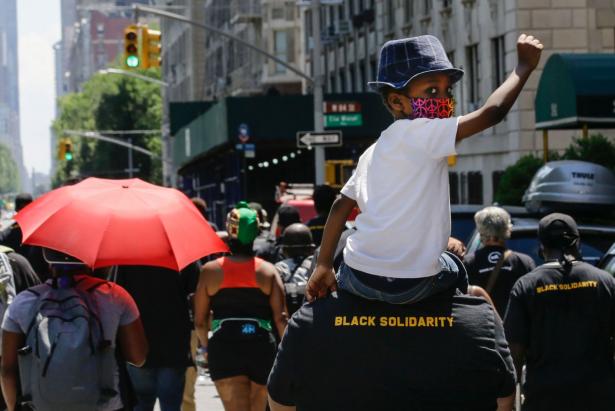 A man marches with a child on his shoulders during a Juneteenth celebration in New York., Frank Franklin II/AP

On Tuesday, October 26, Black Lives Matter joined fellow civil rights leaders to engage with and discuss tangible policy proposals to transform current approaches to public safety with senior officials from the White House and the Department of Justice.

While we appreciate the invitation to speak and discuss solutions, we call on the White House to be courageous as it moves towards Executive Action to move us towards the kind of transformation that this moment demands — the kind of transformation that the spirits of George Floyd, Breonna Taylor, Dijon Kizzee, Wakiesha Wilson, Andrew Joseph III, and so many others demand. A transformational approach to public safety requires that we not expend energy tinkering around the edges of a fundamentally unjust system, but we upend it and dare to imagine and build new systems that invest deeply in resources: like youth programs, good jobs, mental healthcare, housing…resources that actually make our communities safe.

The murders of Jonny Bonta, Andres Guardado, Mona Rodriguez, and so many others remind us that police violence is not only a Black issue. Still, police disproportionately target and commit acts of violence and murder against Black people. We must not confuse the impact that unjust policing has on society as a whole, with a strategy of deracialization, which invisibilizes the harm that Black people experience.

Priorities that we outlined in our recent meeting with the Biden-Harris Administration include:

End Qualified Immunity
We uplift the name #AndrewJosephIII, a 14-year-old child who was killed on February 7, 2014 in Tampa, Florida as he attended “Student Day” at the Hillsborough County Fair. His family has been blocked from a day in court for more than seven years through police claims of qualified immunity and sovereign immunity. We call for an end to the unjust legal doctrine of qualified immunity which allows corrupt police to evade responsibility.

Required Data Collection & Reporting
Establish a national database to which all law enforcement agencies are required to report data on stops, searches, arrests, uses of force, and killings, and make all data and analysis public.

Removal of Police from Schools
We uplift the name #MonaRodriguez, an 18-year-old student and young mother who was killed by Long Beach school police on September 27, 2021 as she fled an after-school fight. We call for the removal of all police from school campuses, and are joined in this position by organizations that include March for Our Lives, Students Deserve, and ACLU and are supported by research that demonstrates that the presence of police on campus does not create safer schools; resources like counseling, librarians, nurses, supportive services, and smaller classes do.

Automatic Access to Victims of Violence Crime Resources
Make families of those killed by police automatically eligible for victims of violent crime funds.

Family Notification Requirement for In-Custody Deaths
We uplift the name #WakieshaWilson, a 37-year-old Black mother who was killed inside Los Angeles Metropolitan Detention Center on March 27, 2016. Her family was never notified and her mother only discovered that Wakiesha died inside the jail after four days of searching. A family notification requirement would mean the immediate notification of families when their loved one is killed or dies in-custody.

Advancing Life-Affirming Approaches to Community Safety
Incentivize alternatives to police as part of a fundamental reimagining of public safety in cities and states. Using an Executive Order, President Biden should establish a Division of Community Safety within the Department of Health and Human Services, which would focus on community safety using a non-carceral perspective — one that treats community safety as a matter of public health.

We call on the Biden-Harris Administration to support passage of the BREATHE Act, which divests from the systems that harm Black people and invests in our communities through education, health, housing, infrastructure, environmental justice, and economic justice. For years, advocates have asked policymakers to begin making a paradigm shift — one that invests in communities, not carceral systems, to keep people safe.

We must continue to uplift the importance of speaking the words “Black Lives Matter” and confronting the white supremacy embedded in this nation’s system in policing head on. Black Lives Matter will continue to fight, both in the streets and in the halls of government, until we build a world where our people can live and walk freely. We will continue to work alongside public leaders and remain a force in our communities throughout the nation to advocate for meaningful policies that reimagine and reform public safety.

We look forward to continuing to engage the government, to support transformative change and vigorously challenge elected leaders when they fall short.