Guilfoyle’s texts, reviewed by ProPublica, represent the strongest indication yet that members of the Trump family circle were directly involved in the financing and organization of the January 6 rally. 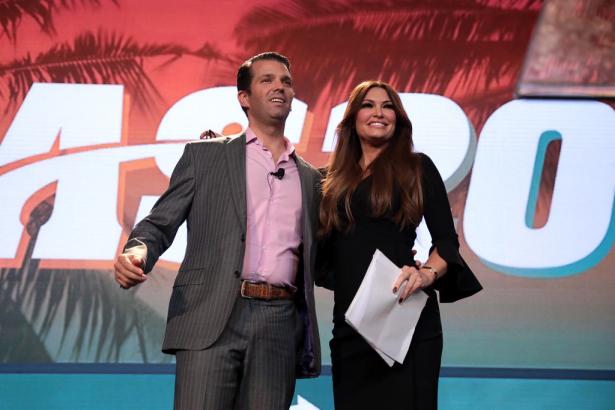 Kimberly Guilfoyle, a top fundraiser for former President Donald Trump and the girlfriend of his son Donald Trump Jr., boasted to a GOP operative that she had raised $3 million for the rally that helped fuel the Jan. 6 Capitol riot.

In a series of text messages sent on Jan. 4 to Katrina Pierson, the White House liaison to the event, Guilfoyle detailed her fundraising efforts and supported a push to get far-right speakers on the stage alongside Trump for the rally, which sought to overturn the election of President Joe Biden.

Guilfoyle’s texts, reviewed by ProPublica, represent the strongest indication yet that members of the Trump family circle were directly involved in the financing and organization of the rally. The attack on the Capitol that followed it left five dead and scores injured.

A House select committee investigating the events of Jan. 6 has subpoenaed more than 30 Trump allies for testimony and documents, including Pierson and Caroline Wren, a former deputy to Guilfoyle. But Guilfoyle herself has so far not received any official scrutiny from Congress.

Guilfoyle’s attorney, Joe Tacopina, denied that Guilfoyle had anything to do with fundraising or approving speakers. He said the text from Guilfoyle “did not relate to the Save America rally” on Jan. 6 and the “content of the message itself” was “inaccurate” and “taken out of context.” He did not respond to additional questions asking about the accuracy and context of the message.

The text messages show that Guilfoyle expressed specific concerns that she might not be allowed to speak on stage at the Jan. 6 rally. Pierson responded that Trump himself set the speaking lineup and that it was limited to people he selected, including some of his children and Amy Kremer, a grassroots activist who organized the event.

Guilfoyle replied that she only wanted to introduce Trump Jr. and had "raised so much money for this."

"Literally one of my donors Julie at 3 million,” she added.

Guilfoyle was referring to Julie Jenkins Fancelli, a Publix supermarket heir who Guilfoyle had developed a professional relationship with during the campaign.

Until now, Wren has been the only person identified as having worked with Fancelli. As ProPublica reported last month, Wren also boasted in private conversations with colleagues of raising $3 million for the events of Jan. 6.

It remains unclear whether that amount was really raised and, if so, how the majority of it was spent. Some of the money raised from Fancelli flowed to dark money groups that supported the rally, according to wire transfers described to ProPublica, planning documents and interviews with insiders.

In a statement from her attorney, Wren acknowledged helping to produce the rally but did not provide further details about her role in fundraising.

“To Ms. Wren’s knowledge, Kimberly Guilfoyle had no involvement in raising funds for any events on January 6th,” the statement said. “They were both present at a peaceful rally with hundreds of thousands of Americans who were in DC to lawfully exercise their first amendment rights, a primary pillar of American democracy.”

The texts between Guilfoyle and Pierson and interviews with Trump officials also suggest that Guilfoyle attempted to influence the lineup of speakers scheduled to appear at the event.

On the night of Jan. 5, Trump Jr., Guilfoyle and Wren attended an event at the Trump International Hotel in Washington, where Trump donors mingled with prominent figures in the movement to overturn the election, according to interviews and social media posts from attendees.

Around the time of that event, Wren called rally staff and urged them to allow speaking roles for Ali Alexander, a far-right provocateur and leader of the Stop the Steal movement; Roger Stone, a former Trump advisor; and conspiracy theorist and InfoWars leader Alex Jones, according to a former campaign official who was told details of the call by people who listened to it.

Trump aides had already deemed the men too radical to go on stage, worrying they might embarrass the president.

During the call, Guilfoyle voiced her support for the controversial speakers, the former campaign official was told. She also specifically demanded that Texas Attorney General Ken Paxton, who had sued to challenge election results in four other states, address the crowd. Alexander later said on a newscast that he also received a call from Guilfoyle that same evening.

Tacopina, Guilfoyle's lawyer, said she did not urge staffers to change the speakers. "Your contention that Ms. Guilfoyle approved a speaking list for January 6th is patently false," he wrote. He threatened to “aggressively pursue all legal remedies available” against ProPublica.

But the texts show Guilfoyle and Pierson talking about a “leaked” speaking list — an apparent reference to an article about the Jan. 6 rally published by the conservative news website Breitbart the day before.

That list included Alexander, Stone and Paxton, among others.

“All I know is that someone leaked a list of ‘speakers’ that the WH had not seen or approved,” Pierson wrote. “I’ve never had so much interference.”

Guilfoyle responded: “Yea and this the list we approved.”

Tacopina did not answer further questions about what Guilfoyle meant in the text where she said "we" had approved a speaking list.

Untangling the relationship between Guilfoyle, Wren and Fancelli is key to understanding the financing of the events of Jan. 6.

In January 2020, Guilfoyle was appointed national chair of the Trump Victory finance committee, a leading fundraising vehicle for Trump’s reelection campaign. She brought Wren on as her deputy.

Guilfoyle, through her relationship with Trump Jr., had access to the family and a certain star power that appealed to donors. Wren, by all accounts a relentless, high-energy worker, brought fundraising expertise and a Rolodex of wealthy Republicans willing to invest handsomely to keep Trump in office. The duo ultimately brought in tens of millions of dollars toward Trump’s reelection.

The pair focused primarily on ramping up the campaign’s “bundling” program, a method of fundraising that relies on volunteers collecting money from their personal networks.

Fancelli, a reclusive member of one of the country’s richest families, was one of those volunteers, according to interviews and internal Trump Victory records. Splitting her time between Florida and Italy, Fancelli raised at least $72,000 from her friends and family.

She stood out to Wren and Guilfoyle, who in 2020 considered her for a role as Florida state co-chair for the bundling program, according to an internal Trump Victory planning document reviewed by ProPublica. The document highlighted Fancelli as a person Guilfoyle should contact personally.

Tacopina said Guilfoyle had never seen any such document "nor is aware of its supposed existence."

On or just before July 14, 2020, Guilfoyle called Fancelli directly, according to a different set of text messages reviewed by ProPublica. The next day, Fancelli made her largest federal political contribution to date, according to campaign finance records: $250,000 to Trump Victory.

After the election, Wren became the main fundraising consultant for a newly formed super PAC run by two of Trump Jr.’s closest aides. The super PAC, called “Save the US Senate PAC,” placed ads starring Trump Jr. in which he encouraged Georgians to vote Republican in the bitterly contested runoff elections that would result in Democratic control of the Senate.

That PAC was primarily funded by LJ Management Services Inc., a company closely linked to Fancelli’s family foundation. It gave $800,000 to the PAC in several installments, records show.

In late December, Wren became involved in the rally preparations for Jan. 6.

Wren told multiple organizers interviewed by ProPublica that she was carrying out the wishes of the Trump family. Some believed her and feared that defying her would upset the Trumps. Others suspected she was exaggerating.

“Caroline kept talking about her connections to Don Jr. and Kimberly Guilfoyle,” said Cindy Chafian, a rally organizer who told ProPublica she was put in touch with Wren and Fancelli by Alex Jones. “I thought she was full of crap.”

As ProPublica previously reported, Wren told Dustin Stockton, another rally organizer, that she had raised $3 million for Jan. 6 and “parked” funds with three Republican dark money groups supporting the rally.

In one case, Wren routed roughly $150,000 from Fancelli to the Republican Attorneys General Association’s Rule of Law Defense Fund, which then purchased a robocall instructing Trump supporters to come to Washington and march on the Capitol after the president’s speech. The robocall was purchased in order to satisfy the conditions of the donation, a person familiar with the transaction told ProPublica.

ProPublica also reported that Wren had pressured rally organizers to allow Jones and other far-right leaders to speak on stage before the president. The effort grew so intense and volatile that on the morning of Jan. 6, a senior White House official suggested rally organizers call the U.S. Park Police on Wren to have her escorted off the Ellipse. Officers arrived but took no action. Wren has previously declined to comment on the incident.

Around the same time, Guilfoyle sat with Trump and other members of his inner circle in the Oval Office and discussed the growing throngs outside, according to The Washington Post. “They’re just reflecting the will of the people,” she reportedly told the president. “This is the will of the people.”

On stage later that morning, Guilfoyle gave a rousing speech introducing Trump Jr. “We will not allow the liberals and the Democrats to steal our dream or steal our elections,” Guilfoyle told the crowd.

Trump Jr. then exhorted the crowd to send a message to the Republican members of Congress who “did nothing to stop the steal.”

Trump Jr. did not respond to an emailed request for comment.

Jones and Alexander left the rally early. Wren escorted the men away from the White House as they prepared to lead the march on the Capitol.

She was off to Florida with at least two major Trump donors, Nebraska gubernatorial candidate Charles Herbster and California entrepreneur Richard Kofoed, who had chartered the jet. The plane left Dulles International Airport at 3:47 p.m., according to aviation records. It dropped Herbster off on Florida’s Amelia Island before heading for West Palm Beach. Wren listed both Kofoed and Herbster as her VIPs for the rally in planning documents. Planning documents show Cassidy Kofoed, Richard Kofoed’s 23-year-old daughter, also worked with Wren on preparations for Jan. 6.

Herbster confirmed that he was on board the plane with Guilfoyle. Richard and Cassidy Kofoed did not respond to requests for comment.

In response to questions about the flight, Tacopina said that Guilfoyle lived with Kofoed and his wife at a rented property in Mar-a-Lago from approximately December 2020 through July 2021.

Guilfoyle has continued her role as a major Trump fundraiser. In October, she was put at the helm of Trump’s super PAC, called Make America Great Again, Again!

Joaquin Sapien is a reporter at ProPublica covering criminal justice and social services.

Josh Kaplan is a Reporter at ProPublica.