The shooting of a man who was ‘running while Black’ has prompted calls for racial justice in the US beyond the guilty verdict of his murderers. 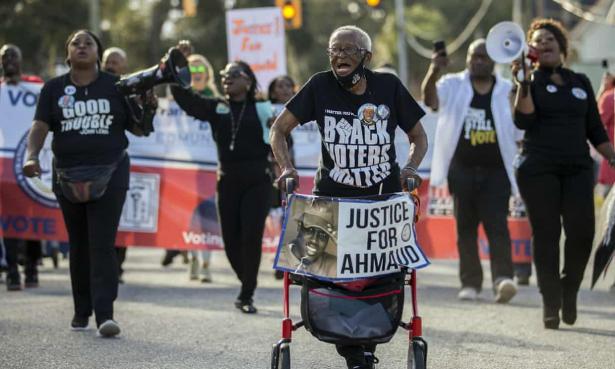 Annie Polite, 87, leads a protest march outside the Glynn county courthouse during the trial of three men accused of murdering Ahmaud Arbery., Photograph: Stephen B Morton/AP

For many observers, the high-profile case of the three white men convicted of murdering Ahmaud Arbery, a 25-year-old Black man who was out jogging, revealed the racist ways the American legal system has been designed to treat Black people differently.

Arbery was killed in February 2020 in the coastal town of Satilla Shores, Georgia. None of the men involved were charged until eyewitness footage was made public months later, shortly before the murder of George Floyd in Minneapolis, prompting widespread protests.

Three white men, Gregory McMichael, 67, his 35-year-old son, Travis McMichael, and their neighbor William “Roddie” Bryan, 52, pursued Arbery, claiming they suspected his involvement in a series of burglaries in the neighborhood. The McMichaels, both carrying firearms, attempted to corner Arbery in a roadway using their truck before the younger McMichael fired three times with a shotgun.

The men were charged with murder, aggravated assault and criminal attempt to commit false imprisonment, counts to which they all pleaded not guilty.

A court has now found all three guilty of murder.

Here are some of the ways the trial touched on race and racism in the US, echoing America’s segregated past as well as modern-day prejudice.

Arbery’s killing highlighted the dangers Black Americans can face doing entirely ordinary things that white people may perceive as a threat. They range from bird watching to showing a house for sale to swimming.

Arbery, a former high school football standout, loved to run. On 23 February last year, he was jogging through his neighborhood in Brunswick, Georgia, when he was tracked by the McMichaels and Bryan and gunned down.

Relying on a civil war-era law that deputized citizens to police the movements of Black bodies and carry out citizen’s arrests of suspected criminals – a measure the state has since overhauled – the white men argued that they were acting in self-defense. They said they believed they were legally justified in pursuing Arbery because they thought he matched the description of a burglary suspect.

Arbery’s death has reaffirmed a concern among many Black runners that they will be racially profiled or attacked while exercising. The multitude of racist experiences of “running while Black” has prompted runners to take precautionary measures such as wearing bright colors to appear non-threatening and running during daylight hours.

Yet Arbery’s white T-shirt, his habit of waving at some neighbors as he passed, and his decision to go jogging in the middle of the day did not protect him.

A reluctance to prosecute

In the weeks and months after Arbery’s killing, Glynn county law enforcement officials either ignored the case or failed to thoroughly investigate his death. In one instance, a district attorney refused to allow police officers to make arrests.

Jackie Johnson, the Glynn county district attorney, barred police officers who responded to the shooting from arresting the McMichaels, saying that Greg McMichael had worked as an investigator in her office for 20 years before retiring in 2019.

“The police at the scene went to her, saying they were ready to arrest both of them,” Allen Booker, the Glynn county district 5 commissioner, told the Atlanta Journal Constitution. “She shut them down to protect her friend McMichael.”

Johnson recused herself from the case four days after Arbery’s killing.

George Barnhill, the Waycross district attorney, took over. Less than 24 hours after seeing the video and evidence compiled by the police, Barnhill decided not to charge the McMichaels, citing insufficient evidence, according to Glynn county commissioner Peter Murphy.

Less than a week later, Barnhill recused himself because his son had worked on a case involving Arbery while working in Johnson’s office. The connection was only discovered when Lee Merritt, an attorney representing Arbery’s mother, found the link between Barnhill’s son and her own on Facebook and raised it with his office.

Tom Durden, the district attorney in nearby Hinesville, then took the case on 13 April, making little progress for more than three weeks until the graphic video of Arbery’s killing emerged on 5 May. The video prompted swift outcry and Durden notified the Georgia bureau of investigation.

The McMichaels were arrested two days later and on 11 May, the Cobb county district attorney and the case’s fourth prosecutor, Joyette M Holmes, took over the case. Holmes is one of only seven black district attorneys in Georgia.

In September, Johnson was indicted on charges of misconduct for allegedly using her position to protect the McMichaels.

According to evidence introduced in pre-trial hearings, Greg McMichael called Johnson soon after the shooting and left her a voicemail, saying: “Jackie, this is Greg. Could you call me as soon as you possibly can? My son and I have been involved in a shooting and I need some advice right now.”

In November, a nearly all-white jury was selected after defense attorneys eliminated almost all Black jurors from the pool.

Throughout a jury selection period that lasted 11 days, lawyers were given a pool of 48 potential jurors, 12 of whom were Black. However, defense lawyers struck all but one of them from the final jury, leaving 11 white members and one Black member.

The defense attorney Kevin Gough previously said in an interview with the Atlanta Journal Constitution that the case’s jury selection pool lacked “Bubbas or Joe Six-Packs”, referring to white men over 40 without a college degree.

Prosecutors urged Judge Timothy Walmsley to reverse the striking of eight Black potential jurors, whom they argue had been deliberately targeted over race. Despite Walmsley’s acknowledgment of the “intentional discrimination”, he said he was limited by supreme court precedent and said that the defense presented justifiable reasons unrelated to race.

Gough also tried unsuccessfully to remove prominent civil rights leaders and Black pastors, including Jesse Jackson and Al Sharpton, from the courtroom, arguing that their presence was intimidating and could influence the jury.

Gough told the judge “We don’t want any more Black pastors in here” and later compared his clients’ treatment to a “public lynching” in language that seemed designed to provoke racial tensions.

During a prayer vigil held outside the Glynn county courthouse this month by Sharpton, Ben Crump, an attorney representing the Arbery family, stressed the acute need for racial justice for Black communities.

“What happens here in Brunswick, Georgia, in the trial in the killers of Ahmaud Arbery, is going to be a proclamation not only to Georgia, not only to America, but to the world, how far we have come to get equal justice in America for marginalized Black people,” he said.

Maya Yang is a freelance journalist.