The Fight for Chile’s Future

Chileans face a stark choice in the second round of their presidential election – a far-right candidate who admires the legacy of Pinochet or a left-wing reformer pledging to tackle social inequality. 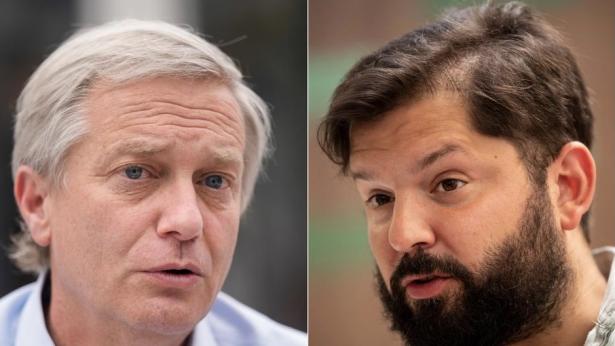 José Antonio Kast of the far-right Christian Social Front and Gabriel Boric of the left-wing Approve Dignity coalition will face off in the second round of presidential elections on December 19,photo: Prensa Latina

The first round of the Chilean Presidential elections on 21 November was surprising. In short, the traditional centre-left coalition, Nuevo Pacto Social, and the traditional right-wing coalition of incumbent president Sebastian Piñera, Chile Podemos, did not make it to the second round of the vote. Instead, it was the left coalition, Apruebo Dignidad, and the far-right coalition, Frente Social Cristiano, which passed to the second round, for which the vote will take place on December 19.

In the Chilean electoral system, to be elected President, a candidate needs to reach 50%+ of the votes. Due the plurality of political parties and the several candidates running for the position, none of them can get enough votes to win in the first round, leading commonly to a second round between the two top candidates—in this case, between far-right candidate Jose Antonio Kast and progressive 35-year old MP Gabriel Boric.

The results may not come as a shock to many who are aware of the larger context of political polarisation in the world, especially with the rise of far-right politics in Europe. However, there are important factors to observe in Chile, especially after the social uprising of 2019. How did the far-right candidate, an open supporter of dictator Augusto Pinochet, become the leading majority (27.91%) in this first round? Gabriel Boric, who is also a former leader of the 2011 student movement, finished in second place (25.83%), despite polls placing him as the frontrunner in the months before the election.

To analyse the results, we must understand the last two years of social and political transformations in the country. The social uprising of 2019 was an eruption against the neoliberal establishment, which created social unrest and a continuity of both violent and nonviolent protests primarily in urban areas. The narratives that predominated those months were of ending Pinochet’s era, whose Constitution continues to function.

Consequently, left-wing political parties and organisations channelled the discontent through a referendum that resulted in a landslide vote in favour of changing the Constitution through a Constitutional Convention, which since April this year has been doing its work. The members of the Convention are majority represented by progressive forces, pushing for profound transformations that—if approved in a new referendum in two years—would create a clear break from decades of neoliberal-authoritarian legacy.

Left-wing political parties and organisations, represented in the coalition Broad Front and Apruebo Dignidad—which includes the Communist Party—have made an incredible effort to mobilise the discontent which surfaced from the social uprising. However, this effort has fallen short.

J.A. Kast, inspired by the populism of Bolsonaro and Trump, has become the front-runner in this election. His political programme may be empty of big ideas, but what is present is a clear obsession with bringing law and order back to the country, complemented by a vehement anti-immigrant sentiment. As such, Kast has focused on two issues.

First is the historical conflict between the Mapuche people and the Chilean state over territories in Araucania. In the last year, violent confrontations, with the killing and arrest of several indigenous people, have dominated the news. Second is the growing immigration crisis, which has seen migrants from countries such as Colombia, Venezuela, and Haiti come to Chile, and which has been terribly handled by Piñera’s government. Migrants are forced to live in public squares and on beaches without sanitation, scraping by for food and jobs in the most unequal country of the Southern cone. Kast’s Christian background has also unsurprisingly appealed to anti-abortion and evangelical movements, which demonise the growth of urban-liberalism in defence of a ruralist lifestyle founded in traditional family values.

The simple formula of far-right populism has worked to sway many of those who looked set to begin on the road to left-wing transformation under the leadership of Gabriel Boric. But this was precisely the problem. The social uprising mobilised masses of discontent toward the establishment, provoking disorder and violence in urban areas. Kast, hand-in-hand with the media’s representation of that violence, galvanised moral panics and fears that associated the violent uprising with scapegoats such as terrorists, communists, and immigrants. Kast has therefore focused on the need to achieve a new social peace, one which sees law and order re-established, and the family placed at the centre of social cohesion—a reactionary programme if there ever was one.

Kast’s solid performance in the first round of the vote was not the only surprise of the evening. The third majority in the Presidential run-off went to Franco Parisi, who obtained 12.80% of the votes. In the Chilean electoral system, it matters who ends up third and fourth, as it influences how those votes will be transferred to the two candidates in second round. Parisi, a populist businessman currently under investigation for corruption, ran his entire campaign online, allegedly from within the United States.

The Parisi phenomenon also highlights the complexities that emerge from a context of social uprising. Again, anti-traditional parties, anti-establishment arguments, calls for redistribution of wealth were key elements of Parisi’s campaign. Although not directly engaged with them, Parisi lined up with a group called La Lista del Pueblo (The People’s List), who emerged as an electoral alternative during the campaign for the Constitutional Convention as a set of ‘independent’ candidates, ‘not from the left or the right’.

Although La Lista del Pueblo endorsed progressive ideas during that campaign and obtained the third-largest number of votes and 27 seats in the Convention, they have yet to achieve political coherence, finding themselves juggling with questionable characters and inconsistent ideas. Parisi’s votes could go to Kast and Boric alike—it’s unclear which one will benefit more.

Kast and Parisi tell us something important about anti-neoliberal sentiments. They do not belong to an established political tendency, let alone a political party. Anti-neoliberalism is a disjointed movement of ideas and focuses on an enemy that you cannot clearly see. Neoliberalism and its policies, inequalities, and injustices were administrated in Chile in the last thirty years by Christian democrats, socialists, and liberals alike.

As neoliberalism is an invisible enemy of the people, anyone can become the bastion of its defeat. This includes those who have benefited and defended the system for years, such as Kast and Parisi. However, this should not be confused with blunt readings of depoliticisation. People are engaged in politics more than ever. Participation in the uprising, in the Constitutional referendum and election, was significant in a country that perfected political exclusion throughout the twentieth century. The problem we face is what politics means for those people mobilised over the course of the social uprising.

Regardless of Sunday’s results and the ability of each candidate and political coalition to win the second round, what this process has shown us is that deep social transformations bring with them political polarisation. The end of neoliberalism in Chile was never going to be a short and simple process, but a long road of class struggle between those who represent the protection of the elite’s interests and those progressive forces who, without political power or control of both the state and media, need to innovate in conveying a message to the discontented.

This struggle will continue to fracture the liberal democratic pact that centrist political parties have maintained since the return to democracy in 1990, provoking—most likely—new cycles of social uprisings and unrest. And although demoralising for the Left to end up second in the first round to the Presidential seat, it is also important to highlight that those progressive views and organisations are not going anywhere. Feminist groups, environmental organisations, trade unions, etc., are still represented in this struggle, gaining a few important seats in the Parliamentary selections. More importantly, they have developed their social bases in the last two years since the uprising and have the potential to continue to grow.

Nevertheless, there are lessons to learn from this long process of transformation. Progressive forces have failed to address some of the dominant narratives broadcast by Kast, particularly issues related to security, criminality, and law and order. His speech on Sunday was framed in terms of ideas of ‘freedom’ [from communism], ‘peace’ [from Mapuche people], and ‘order’ [from migrants]. But the message was presented to appeal to deeper feelings of insecurity and fear created by neoliberalism—something that fascists and ultra-nationalists have used before.

The management of fear is a powerful tool. Fear of communism, fear of terrorism, fear of migrants, fear of the other, as a repetitive discourse has successfully turned discontent with social and economic injustices toward the reorganisation of repressive and regressive powers deeply entrenched in the traditional national elite.

Boric, on the other hand, represents a Left with hope. He invited people in his Sunday speech to continue building hope against fear. But the line between those two emotions is too fine. The expectation for us looking from the outside is that the Left will not commit the mistake that campaigners did in Brazil with ‘Ele Não’, which focused solely on the image and trajectory of Bolsonaro without addressing the reasons for his success in large sectors of society.

The Left needs to address those concerns and issues upfront. Recognition that Chileans are not naturally progressive on questions of immigration, women’s rights, and wealth distribution could allow them to break through the reticence that some have against their progressive project. Addressing the fears head on may be the only solution, because there is no time for defeatism when barbarism is knocking at your door.

Melany Cruz is a Lecturer in International Politics at the University of Leicester.

Tribune was established in 1937 as a socialist magazine that would give voice to the popular front campaigns against the rising tide of fascism in Europe.  It was relaunched as a print magazine and website with the support of Jacobin in 2018, and its new team is committed to reviving this great tradition on the British left. Our mission remains, as Michael Foot wrote on the magazine’s 21st birthday, “to sustain the old cause with the old weapons.”