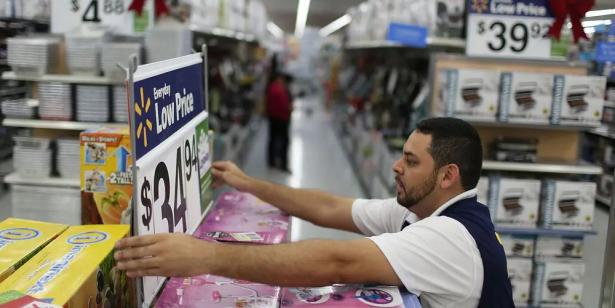 Consumer prices are going up, but corporate profits are rising even faster.

Walmart, which announced third-quarter financial results this morning, was able to post better-than-expected earnings in part by offering fewer discounts to shoppers, but a lot of large firms have spent their recent quarterly calls bragging to investors about their ability to hike prices with relative impunity.

"What we are very good at is pricing," Colgate-Palmolive CEO Noel Wallace said. "Whether it's foreign exchange inflation or raw and packing material inflation, we have found ways over time to recover that in our margin line."

"We've been very comfortable with our ability to pass on the increases that we've seen at this point," Kroger CFO Gary Millerchip said in October. "And we would expect that to continue to be the case."

Corporations have a tendency to try and boost profit margins during periods of elevated inflation, The Wall Street Journal reported, and now is no different.

Roughly two-thirds of the largest publicly traded US companies have reported better profits this year than the same period in 2019, the WSJ found, citing FactSet data. Nearly 100 of those were performing at least 50% better this year than in 2019.

Former US Labor Secretary Robert Reich called this phenomenon a "symptom" of "the economic concentration of the American economy in the hands of a relative few corporate giants with the power to raise prices."

Inflation may be a problem for consumers, but the bigger issue is a lack of competition, Reich said.

"Corporations are using the excuse of inflation to raise prices and make fatter profits," he said.

Corporate pre-tax profits as a share of total US output has also reached a multi-year high of 13.5% in the second quarter, which means that companies are taking an even larger slice of the economic pie. And that number is trending higher.

For example, consumer goods giants Unilever, Proctor and Gamble, and Colgate-Palmolive have remarkably similar portfolios of brands selling similar products, and each reported improved profits from higher pricing in the third quarter. Coca-Cola and PepsiCo also rolled out price increases around the same time.

This is not to say that there is illegal price-fixing going on, but having so few players in the game makes it a lot easier for companies to follow similar strategies.

Even the auto industry, which is pretty competitive compared with other consumer goods categories, is currently navigating its own version of the classic "prisoners dilemma" from economic game theory.

High demand and low supply has allowed most companies to boost profits by offering fewer discounts — a move automakers have wanted to do for decades — but the minute one company starts cutting deals to take market share, the others will soon face pressure to follow.

Input costs are indeed making it more expensive for businesses to provide goods and services, but the healthy profits that companies are taking in show that they're doing just fine as consumers increasingly see their buying power evaporate.

The remedy, Reich says, is not a higher interest rate from the Federal Reserve , which would likely slow down the economic recovery.

"This structural problem is amenable to only one thing: the aggressive use of antitrust law," he said.