Global real wage growth has stagnated compared to productivity in recent decades contributing to widening income inequality. Economic desperation is compounded by the fact that half of the world’s population lacks any form of social protection. 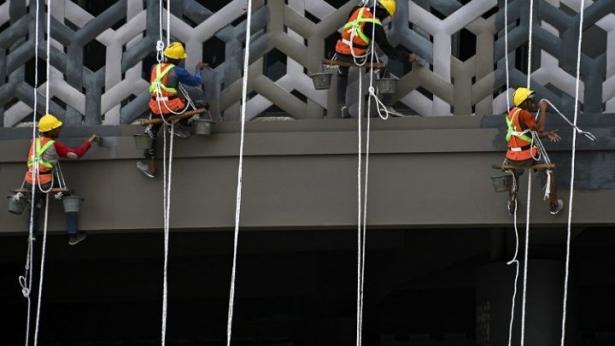 In this 25 September 2021 photo, workers paint in outside of the Tsunami Museum in Banda Aceh, Indonesia. In the 1990s, an increase in minimum wages in Indonesia was met with an increase in formal employment., (AFP/Chaideer Mahyuddin)

This year’s Nobel Prize in Economic Sciences was awarded to US-based economists David Card, Joshua Angrist and Guido Imbens for real-world research in the 1990s that empirically demonstrated that the idea touted by conservative economists, that higher minimum wages mean fewer jobs, is not based on fact.

The researchers used a ‘natural experiment’ to study the effects of a minimum wage increase in New Jersey, which raised it to the highest minimum wage rate in the country at the time – a move that received strong opposition from business leaders.

The findings shook the economic establishment at the time. However, since then, numerous other empirical studies have further challenged the theory that minimum wage increases cost jobs. In Brazil, minimum wages increased in real terms by upwards of 60 per cent from 2003 through 2012, with no noticeable employment impacts. An increase in minimum wages in Indonesia in the 1990s was met with an increase in formal employment as well as a decrease in informality, with local demand also increasing. The introduction of the minimum wage in Germany in 2015 was not met with the massive job losses that were initially predicted by many economists; the employment effects were negligible, while income security for low-income earners was significantly boosted. However, despite the mounting evidence, the unproven yet influential theory that raising minimum wages directly leads to job loss has continued to persist – a myth peddled by conservative economists, major industry organisations such as the American Chamber of Commerce and some international organisations such as the International Monetary Fund.

“Raise minimum wages as a matter of urgency”

The Nobel Prize is a serious indictment against those who have argued against decent minimum wages for workers, representing an international rejection of the now debunked economic narrative that wage increases are bad for workers and the economy. It has taken some 30 years for the facts to be given prominence over a damaging and groundless theory, with millions of workers kept in poverty as a result.

According to the ITUC Global Poll, 76 per cent of the world’s people find the minimum wage is not enough to live on. In-work poverty remains rampant globally according to the International Labor Organization (ILO), with 300 million workers in emerging and developing countries earning less than US$1.90 per day, and a further 430 million workers in emerging and developing countries earning between US$1.90 and US$3.10 per day. Some 266 million workers are paid less than the minimum wage, either because they are not legally protected or because of non-compliance.

And global real wage growth has stagnated compared to productivity and economic growth in recent decades, which has contributed to widening income inequality. The economic desperation experienced by workers is compounded by the fact that half of the world’s population lacks any form of social protection, and an additional 22 per cent lack comprehensive protection in line with ILO standards.

At a time when the world needs evidence-based research to support a global economic recovery, economics too needs to be based on factual analysis rather than ideological speculation dressed up as legitimate policy advice.

With the award of this prize, ensuring workers’ adequate incomes through raising minimum wages and enhancing social protection should now be seen by governments as a matter of urgency. Such measures are not only vital in order to provide workers and their families a floor of income security, but should also be seen as investments. Raising minimum wages has been shown to reduce poverty and inequality, support increased consumption and demand for local goods and services, contribute to productive economic activity, and support inclusive growth. ITUC research has shown how investing an additional 1 per cent of GDP on social protection can lead to significantly increased employment, tax revenue, and nearly double the returns in GDP terms.

Governments must ensure minimum living wages, taking into account the cost of living for workers and their families, and developing them together with social partners. They must have the force of law, and non-compliance must be met with strong and dissuasive sanctions. Social protection systems, likewise, must be strengthened and extended to cover workers in all forms of work as well as those in the informal economy. Such measures will not destroy jobs, but rather help build the basis for a new social contract, allowing for a robust, fair and inclusive economic recovery, with jobs, decent work and resilience.

Evelyn Astor is an advisor on economic and social policy at the International Trade Union Confederation (ITUC), specialising in social protection, wages and employment policy.

Equal Times is a trilingual news and opinion website focusing on labour, human rights, culture, development, the environment, politics and the economy from a social justice perspective.