As of December 1, so far 3,393 schools had been disrupted this year due to mental health concerns, meaning they were temporarily closed for in-person classes because of issues like “teacher burnout” and “stress on students.” 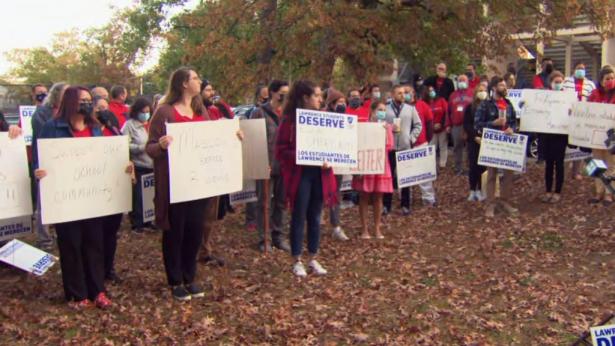 In mid-October six fights broke out in one day at Lawrence High School in Massachusetts. Police were called and arrests made. For those inside the school, this was shocking, but not surprising.

“The unrest is the students’ way of screaming out, ‘We need help,’” said high school English teacher Kristin Colucci. “Their social and emotional needs are not being met.”

Since the return to school buildings in September, teachers and students say the stress and fragility are palpable. Lawrence High is so understaffed that sometimes students show up to a classroom and find no teacher. Bathrooms are locked because staff is not available to supervise what’s happening in the hallways.

This school began the year 42 educators short. That number has only increased as more teachers leave, exhausted and overwhelmed, or call in sick due to Covid and stressful, unsustainable conditions.

Although the district is supposed to have a core of substitutes in each school who are full-time employees, the pay is so low that it cannot attract or keep hires—and the district will not hire per-diem substitutes. Without subs, teachers and paraprofessionals are expected to use their preparation time to oversee other classrooms.

Lawrence, 30 miles north of Boston, is perhaps best known for the 1912 Bread and Roses strike by immigrant textile workers. Today it is still a city of immigrants and low wages: 40 percent of the population was born outside the U.S., and 24 percent lives in poverty.

“Lawrence has always been a district that is undervalued,” said Shaun Steele, a 10th grade English teacher, “but it has reached a breaking point under pandemic conditions. It is no longer tenable.”

Because so many residents are essential workers, Lawrence has had some of the state’s highest Covid numbers. Students stayed out of school buildings for a year and a half; many were home watching siblings while their parents kept working.

In the return to in-person teaching, rather than emphasize the emotional well-being of students, the district added 45 minutes to the school day in an effort to make up lost learning time.

The administration has been unrelenting in its focus on improving student scores on the annual standardized test, the Massachusetts Comprehensive Assessment System (MCAS)—a marker, according to the state, of how well a school is doing.

“We are about test prep and assessing for test prep—and that means a lot of needs are not being met,” said Lawrence Teachers Union President Kim Barry.

While the administration is focusing on test scores, educators speak of student “dysregulation.” That is, students seem emotionally fragile and are having difficulty managing their anger, sadness, and anxiety. “We cannot pretend this should all be about raising MCAS scores,” said Masha Stine, who teaches math at Lawrence High School.

Instead, teachers say, schools should be dedicating time to building community and helping students feel safe.

Short staffing, emotionally vulnerable students, intense stress, and safety concerns are major issues for educators across the country this year.

According to Burbio, a site that tracks K-12 school data, as of December 1, so far 3,393 schools had been disrupted this year due to mental health concerns, meaning they were temporarily closed for in-person classes because of issues like “teacher burnout” and “stress on students.”

Many of these closures occurred around the Veterans Day and Thanksgiving holidays. But others—such as in Bedford, Ohio, Fairview, Oregon, and Nelson City, Virginia—were cool-down periods on the heels of student fights.

What’s different about Lawrence, though, is that its public schools have been held up by education reformers as a shining example of the success of undermining collective bargaining and taking away local control.

In 2011, Lawrence became the first Massachusetts district to be put in receivership under a law that allows the state to take over districts deemed “chronically underperforming.” The receiver has broad latitude to change the collective bargaining agreement and little obligation to bargain.

Test scores initially went up, but have since flattened out. Under the control of the appointed receiver, Jeff Riley, the teacher retention rate dropped, along with the percentage of “highly qualified teachers”—that is, teachers with a bachelor’s degree and a Massachusetts teaching license who have shown subject matter competency.

These effects have only been exacerbated since the pandemic. Steele, a building rep, says more than half of the 60 teachers he represents are in their first three years of teaching.

Riley garnered accolades for raising test scores in Lawrence; he was made Massachusetts Commissioner of Education in 2018. But the problems behind the scores are more evident than ever. “Everything that was a problem before the pandemic has now risen to the top,” says Steele.

After the fights and arrests in October, educators and community members began organizing to demand more staff, more counselors, more input in decision-making, and an end to the receivership.

At a mid-October walk-in/walk-out (where educators enter and leave the building together at the start and end of the days) teachers were joined by students, parents, and local politicians. That evening the school committee (equivalent to a school board) passed a resolution calling for the state to return district control to the local community.

Later that month, students and community members joined teachers in a four-mile march through the city to the superintendent’s office, where they delivered a petition calling for more support. They also demanded to know where the $84 million in federal relief funds that Lawrence Public Schools received was being spent. The superintendent “never showed her face,” Colucci said.

Teachers are calling for a return to their normal workday, more staffing support, wrap-around services for students and families, more paraprofessionals, and the hiring of substitutes. Students echo their demands. As ninth-grader Yebriana Castillo told me, “We want more people to be more understanding and trying to help us.”

Despite the hardships, “it is “an exciting time to be in Lawrence,” Stine said. “There is fear, but I’ve never seen so many people ready to go.”

Still, the teachers I spoke to are not naïve about what it will take to build power. The constant churning of staff makes organizing difficult. “I am organizing alongside people who have been here for weeks,” said Steele.

Stine credits the unusual longevity of the teachers in her department (everyone has been teaching for at least seven years) for their ability to get teachers to turn out for actions. Teachers with three or fewer years in the district have few protections; the climate of fear is real. “We don’t feel valued at all,” Colucci said. “We feel like we have to fight constantly to keep our positions, like we are constantly being judged.”

There are also divisions to bridge. Lawrence High is a single building, but divided into separate “schools” for each grade level, so teachers (and students) don’t naturally interact across grades. Teachers are developing plans to reach out across grade levels at the high school—and then to connect to the elementary and middle schools.

Steele said he is constantly checking in with educators in his building and asking them to reach out to others. But, said Stine, “the union has to do a better job of teaching the rank and file about the power we have.”

Kim Barry, the president of the local, acknowledged the challenges of organizing newly minted teachers in a climate of fear. But the teachers I spoke to are looking for, in Colucci’s words, “strong voices at the leadership level.”

“It is about how we use our labor power,” Steele said. Some are even more blunt, and say it's time to strike.

Barbara Madeloni is Education Coordinator at Labor Notes and a former president of the Massachusetts Teachers Association.barbara@labornotes.org

Labor Notes is a media and organizing project that has been the voice of union activists who want to put the movement back in the labor movement since 1979.  Through our magazine, website, books, conferences, and workshops, we promote organizing, aggressive strategies to fight concessions, alliances with worker centers, and unions that are run by their members.

Like what you see? We rely on your support. Please help us out with a tax-deductible donation!

Hundreds of Labor Notes supporters have signed up as monthly donors. For a pledge of $10/month or more, we’ll send you our limited edition “Fight the Boss, Build the Union” T-shirt, plus a free subscription to Labor Notes. Visit labornotes.org/donate to start your pledge.