One hundred and forty million Americans are poor or low-income in the richest nation in the history of the world. The steady growth of America’s GDP has not, in fact, been “good news for all people.” 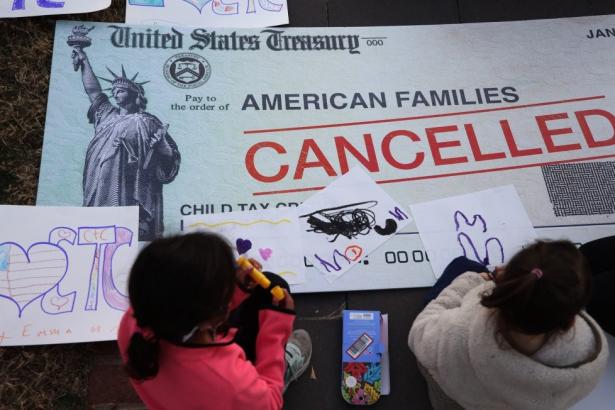 Children draw on top of a 'cancelled check' prop during a rally urging the passage of the Build Back Better legislation to extend the expanded Child Tax Credit, in front of the U.S. Capitol in Washington, D.C., on Dec. 13, 2021., Alex Wong

The manger scenes that decorate homes and church yards this time of year remind us that first-century shepherds were the original witnesses to the good news of Jesus. The low-wage workers of their day, shepherds in first-century Palestine were either young boys from poor families or migrant workers—the same class of people who work for less than a living wage today in the food service and hospitality industries. The angels in the Christmas story do not entrust the message of “peace on earth, good will to all people” to the religious leaders, politicians, or influencers of the ancient world. Low-wage workers get the news while they are working in the fields. They walk off the job to become the first witnesses of the Messiah’s birth.

As we celebrate Christmas in 2021, low-wage workers are again walking off the job in an historic wildcat strike that many Americans have misunderstood as simply “supply chain issues” or a “slow economic recovery.” When COVID-19 shut down much of the world in 2020, the low-wage workers who stock shelves, deliver food, and clean our public spaces could not work from home. They continued to show up in person, often traveling by public transportation. On their commutes and at their jobs, they were the first to be exposed to an airborne virus, the first to get sick, and the first to die. In the early months of the pandemic, poor and low-income Americans were the single group at greatest risk of death from COVID-19.

While millions of Americans stayed home to stay safe, we celebrated the “essential workers” who kept us fed and entertained with mail-order consumer products. For a moment, employers even paid some of them “hero pay” as hazard bonuses and paid leave when they got sick. Poor and low-income Americans voted in historic numbers in 2020, but they have not seen their hopes for living wages, affordable housing, health care and paid family leave fulfilled in 2021. Like the shepherds in the Christmas story, low-wage workers are longing for the justice that would be good news to all the people. Like their ancient predecessors, they are walking off the job to welcome the possibility of a new order in society.

On December 13, hundreds of low-wage workers joined moral and religious leaders on Capitol Hill to declare that the Senate must pass the Build Back Better Act and voting rights protections before they adjourn to celebrate the holidays, demands we now know are likely to go unmet. While corporate lobbyists try to use fear of inflation to prevent major investments in our social infrastructure, low-wage workers understand that, over the past half a century in this country, the richest 1% of Americans have seen their share of the economy nearly double. Meanwhile, the cost of basic needs like housing, health care and education have soared. One hundred and forty million Americans are poor or low-income in the richest nation in the history of the world. The steady growth of America’s GDP has not, in fact, been “good news for all people.”

Low-wage workers also understand that the attack on voting rights in state legislatures across the country this year is a backlash against the power of their votes and their voice in our public life. A modest investment in our social infrastructure is only imaginable because Democrats control both chambers of Congress and the White House. If congressional districts are gerrymandered to favor Republicans, voter rolls are purged and voter-access measures are rolled back in 2022’s midterm elections, the change that poor and low-income people voted for will be canceled by politicians who do not represent the majority of the American people.

At this critical moment in the story of American democracy, the message of Christmas that the shepherds first proclaimed is the good news we need. This is why the Poor People’s Campaign will continue to organize for voting rights and investment in the people. It’s why low-wage workers are willing to walk off their jobs en masse to insist on better wages. It is why we are planning a Mass Poor People’s Assembly and Moral March on Washington for June 18, 2022, to create a platform for the nation to hear the voices that are so often left out of our political debates and economic analysis. As we celebrate Christmas, may we remember to listen to low-wage workers and heed the good news they are still proclaiming “for all people.”