Book Review: ‘We Will Remain Standing on This Land and Teach’

Palestinians living under occupation and those of us in the diaspora do not lose our love for our land as the grip of apartheid gets tighter — our determination to go back home and to stay on our land only increases. 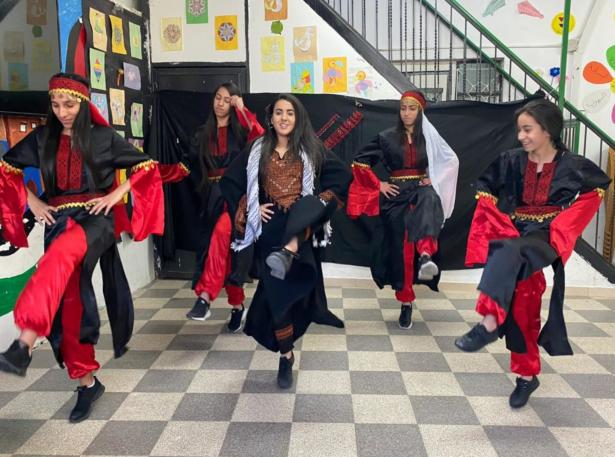 Review of Determined to Stay: Palestinian Youth Fight for Their Village by Jody Sokolower. Interlink, 2021.

As a Palestinian American growing up in Northern California, some of my fondest childhood memories were of family trips back home. Palestine and back home were synonymous in our household. Now as a mother of three children, I reflect on those trips and appreciate the visits much more. Drinking mint tea in the evenings on my grandmother’s baranda (veranda), walking to the local Jaffar bakery for kunafa in Beit Hanina with my sisters and strolling through the Old City of Jerusalem, taking in the sights and smells — the aroma of za’atar spice mixed with sounds of the latest Arabic music, olivewood treasures and beautifully painted ceramics galore. I dream of the day I can share such experiences with my children.

What I do not miss about these visits are the checkpoints, the armed soldiers, the interrogations at the airport, and the view from my grandmother’s backyard of Israeli occupation soldiers surveilling Palestinians. As I read Jody Sokolower’s new book Determined to Stay: Palestinian Youth Fight for Their Village, my childhood memories of the visits back home flooded my heart with emotion. This book is the perfect blend of well-documented lived experiences of Palestinians living under brutal military occupation and proof that Palestinians remain steadfast in their dignified fight for liberation.

As an educator and parent, I lament the intentional erasure of the Palestinian narrative in the curriculum of our local schools. As I read Determined to Stay, I thought, “This is exactly the type of book I would love to see my daughter reading in her 9th-grade classroom.” The absence of the Palestinian narrative is shared by Ayesha, a student Sokolower interviews in San Francisco: “It’s a struggle. I don’t feel represented. I’ve been in the [San Francisco] school district for 12 years, and we’ve never studied anything about Arab history, Arab Americans in the United States or about Palestine.”

Determined to Stay includes a series of stories mainly shared from the geographic focal point of the book: Silwan. Silwan is a Palestinian village outside the walls of Jerusalem’s Old City and is historically known as a densely populated village where generations of Palestinians have resided. Israel illegally annexed Silwan in an effort to expand East Jerusalem and their domination over the area. In the process, Israel has demolished homes and allowed Israeli settlers to move onto Palestinian land, arresting children and terrorizing Silwan residents.

A recent Al Jazeera article quoted Aviv Tatarsky, a researcher from the Israeli Ir Amim NGO: “One of Israel’s major long-term goals in Jerusalem is transforming the Old City Basin from what it is today — a dense Palestinian urban area, which is also the place of some of the most holy sites to the three Abrahamic religions — to one where Jewish nationalistic and religious identity is dominant above all.” He added, “For this purpose, the Israeli government — aided by settler organisations — is evicting Palestinian families in neighborhoods such as Silwan and Sheikh Jarrah.”

As Sokolower points out, Israel’s strategy includes relentless attacks and arrests of children, creation of barriers for access to education, forced expulsions from homes, and the justification of the land grab based on archaeology and the creation of the City of David theme park. This issue has gained international attention, but Israel has not succumbed to pressure to halt its attacks on Silwan from international leaders or NGOs.

Determined to Stay is the perfect title for this book because that phrase describes precisely the willpower of the Palestinians in Silwan. Sokolower illuminates this willpower through the stories of those she crossed paths with during her multiple trips to Palestine. She draws on the wisdom of Palestinian activists Zeiad Abbas Shamrouch and Jawad Siyam, who offer key background information to understand the reach of the occupation. Sokolower does what our U.S. media outlets have failed to do — humanize Palestinians. She shares stories few people ever hear, and this makes the reader feel like they are on the ground in Palestine.

What I appreciate most about Sokolower’s book is her commitment to share the voices of the leaders of the Madaa Creative Center and the children of Silwan. The Madaa Creative Center represents the hopes of a multigenerational community of Palestinians who pass on their traditions, create music, and join in debkeh as a form of resistance. It is through their eyes and experiences that we gain a better understanding of their struggle.

The center serves as an outlet for children and teens to escape the horror of living under a settler-colonial military regime that controls almost every aspect of their lives. As Sokolower spoke with Majd Ghaith, the project director at Madaa, he explained, “Before the center, you would see a lot of kids playing in the streets. That’s how I grew up. But it’s too dangerous now, because of the settlers and the Israeli armed forces.” As a mother, it’s heartbreaking knowing that Palestinian children cannot play freely in front of their homes out of fear of attacks by the Israeli occupation forces — this is not new, but the media too often erases the violence, fear, and humiliation Palestinians experience on a regular basis. An undercover Israeli policeman, dressed as a Palestinian, arrests a Palestinian child in Jerusalem. Photo from Al-Quds News Agency.

As a social studies teacher, Sokolower understands the importance of telling stories to build empathy and solidarity. Middle and high school student readers can hear the perspectives and experiences of Palestinian youth. The stories of the people of Silwan living under brutal Israeli military occupation are heart-wrenching. But Sokolower doesn’t leave the story there. As she takes us on several round-trip journeys from San Francisco to Palestine, Sokolower connects Silwan to the solidarity movements in the diaspora led by groups like the U.S.-based Arab Resource and Organizing Center (AROC).

LIVING ON STOLEN LAND—IN ISRAEL AND THE U.S.

Silwan can be used as a case study of the expansive settler colonial agenda that Israel has pushed since its inception. Sokolower also weaves the ongoing struggle of the people of Silwan to stay in their homes — and to live and move freely on their own land — to the history of settler colonization and extermination of Native peoples from their Indigenous homelands in the United States. With her own home on Ohlone land, Sokolower stresses: “No matter where we live in the United States, Indigenous history has been buried right under our feet.” The land of the Palestinian people was stripped from them as the Ohlone land was stripped from the tribal people who lived on and cultivated that land for thousands of years. These connections make this book even more valuable for U.S. teachers and students who typically do not draw the parallels between Palestinians living under Israeli occupation and colonization of Native land we reside on.

Determined to Stay is a story of resistance. Reflecting on his visit to Palestine in the foreword, Nick Estes—professor, resistance organizer, and citizen of the Lower Brule Sioux tribe—states: “Wherever there is occupation, there is resistance. There is always something beautiful about the sense of freedom in a shared struggle. But I was amazed at the level of resistance among everyday Palestinians. From young children to elders.”

In a February 2012 Rethinking Schools interview, Sokolower asked Jawad Siyam, director of Silwan’s Wadi Hilweh Information Center, what he believes is the most important thing for youth and families in the United States to understand about Silwan and Palestine. Siyam answered: “Everything in Silwan now is about Israel’s deliberate effort to push us out of East Jerusalem and our determination to stay. . . . we are resilient. Each time, we are resisting, fighting back.” This important history and powerful example of resistance need to be shared in school curriculum.

Palestinians living under occupation and those of us in the diaspora do not lose our love for our land as the grip of apartheid gets tighter — our determination to go back home and to stay on our land only increases. Sokolower’s book makes me long for mint tea on my grandmother’s baranda. It gives me even more inspiration as an educator. As Palestinian student and rapper Odai Qareen tells Sokolower: “We will remain standing on this land and teach, because education is the strongest weapon.”

The current situation in Silwan is bleak for its Palestinian residents.  While the fight to save their homes continues, they face a legal system which was built on institutionalizing Israeli superiority over Palestinians and reinforcing settler colonialism.  Palestinian families find themselves defeated in Israeli courts as plans for the City of David theme park move forward. At least 84 homes are listed for demolition, hundreds of Palestinians are facing homelessness, and they are desperate for the international community to back them.

In a recent article published by Al Jazeera, Fakhri Abu Diab, a member of the Silwan Lands Defense Committee, stressed that in order to stop the demolitions in the Wadi Yasoul neighborhood,  action from the international community is essential.  “Forced displacement, or unlawful transfer of civilians in occupied territory, violates the Fourth Geneva Convention and constitutes a war crime under the Rome Statute of the International Criminal Court,” Abu Diab wrote. However, as proven time and time again, international law is not considered when Israeli courts or military make their decisions.

The Israeli newspaper Haaretz recently reported that a health clinic is also on the verge of demolition. The clinic is one of the only COVID testing sites in the area. Residents have attempted to propose alternate plans to the Jerusalem municipality but all plans to legitimize existing Palestinian homes and buildings that Israel deems illegal have been rejected.

This past year, hashtags like #SaveSilwan have gained popularity and brought global attention to the plight of the Palestinians losing their homes to Israeli colonization—but what we must keep in mind is the humanity that exists behind hashtags like #SaveSilwan or #SheikhJarrah.  We must think about the children who will be torn from their homes, who will witness the only place their families have for shelter being stripped from them and destroyed to rubble.

“I can close the window, but I can’t close the door to the house,” Khalid Shwaiky told Middle East Eye,  in reference to his daughter asking him to close a window. “I can’t stop the municipality’s squads and bulldozers. One early dawn, they will come to demolish our house.” He went on to say that while Israel is armed with “weapons and bulldozers, we are armed with right and resolve.”  Shwaiky’s resolve is yet another example of the resilience of the Palestinians living in Silwan.

In Determined to Stay, Sokolower repeatedly documents this resilience and steadfastness.  This determination to remain strong while living under military occupation has clearly been passed on from generation to generation.  While sympathy for the Palestinian plight continues to grow internationally, the global outcry over Israeli crimes must not wane.  In his speech to the United Nations on November 29, 2021, Mohammed El Kurd closed with: “We deserve justice and liberation within our lifetime. We deserve our land back.” In his recently published book of poems, Rifqa, named after his grandmother, he reminds us, “This fight is a revolution until victory.”

An earlier version of this review appeared in Rethinking Schools.

Nina Shoman-Dajani is a college administrator at a public community college in Illinois. She also teaches courses on Arab American Studies and Middle Eastern American Issues at two universities in Chicago. She resides in the southwest suburbs of Chicago.