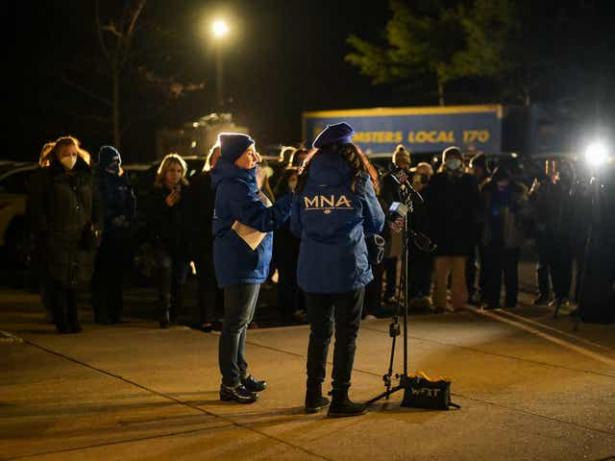 Nurses cheered and proclaimed victory as they announced that a new contract had been ratified 487 to 9.

Hospital CEO Carolyn Jackson in an interview Friday called it “a relief to have the strike over with,” although she admitted she was more relieved when the tentative agreement was reached in December.

It was a tough fight.

Jackson described it as “a very divisive last year.”

And Steve Striffler, director of the Labor Resource Center at UMass Boston, said the overall horse-race takeaway from the strike was difficult to pin down.

“I feel like nurses won the strike, but I’m not sure if there are any winners in all this in a larger way,” Striffler said. “It’s obviously a win for those particular nurses — it’s amazing they stuck together against a company that wasn’t willing to bend. ... They can certainly see it as a victory, but it came at a big cost, too.”

Added Striffler: “I don’t think it will shift anything in the labor movement. One message sent by Tenet (the Dallas-based company that owns and operates St. Vincent Hospital) or the health care industry more broadly is that we really need to think long and hard before going on strike, because these folks are also willing to hold on.”

Moreover, the union drama at the hospital continues.

A petition to decertify the Massachusetts Nurses Association as the union representing nurses at the hospital has been filed and garnered the support of the National Right to Work Foundation, which describes its mission as “to eliminate coercive union power and compulsory unionism abuses through strategic litigation, public information, and education programs.”

Jackson said she had no comment on the decertification effort beyond a previous statement that “the hospital respects the legal right of its nurses to choose whether or not they wish to be represented by a union.”

In sum, there may be some tension when nurses head back into the hospital.

“Returning to work and then navigating a situation where I think a good chunk of replacement nurses are continuing ... that’s going to be a struggle,” Striffler said. “(Nurses) are going to be returning to work with people who were trying to replace you.”

Striking nurses interviewed, however, were determined to make it work.

Marlena Pellegrino speaks after the vote that ended the nurses strike.
TaJonn Nickelson

“Well, I think we work in a very tense workplace as is,” Muldoon said. “There could be some tension but I think it could be worked through. It would be foolish to say we go in there and things would be Pollyanna, hunky-dory, and I can’t speak for the nurses who stayed in, but know that for a group of us striking nurses, we came from all backgrounds, all ages. ... I think that because of that, we really have had a lot of different viewpoints and had the ability to talk it out among ourselves, and talk about how we conduct ourselves, and I think we will be fine. We’re ready to handle all tensions.”

“We are going to have people working shoulder to shoulder with people they’ve been at odds with,” she said. “We need to make sure those relationships heal as best as possible.”

So what will that return to work look like? What are the next steps for St. Vincent Hospital?

If these deadlines are not met, the hospital will consider the nurse to have resigned, Jackson said.

Jackson said that, while all striking nurses are welcome, she guessed about 400 of the 600 nurses who were still on strike will return to the hospital. Many of the nurses who went on strike have moved on to other jobs elsewhere over the course of the last 10 months, she noted.

Pellegrino said she couldn’t guess how many nurses would return, although all striking nurses were encouraged to do so.

That uncertainty over how many nurses will return also made it difficult for Jackson to say when the hospital would begin reopening some of the beds that have been offline since August due to the strike.

“I’m cautiously optimistic we can open beds in the near future, but until we know who's returning, it’s impossible to know what beds will be reopening and when,” Jackson said, noting that 70 beds at the hospital remained offline.

The reorientation process will also emphasize healing and uniting in a common culture at St. Vincent Hospital.

Jackson said the hospital will work on increasing internal communications, hold town hall meetings for hospital workers to “reset the tone and well as reset expectations” at the hospital, and emphasize two initiatives the hospital began in May: a Commitment to My Colleagues initiative that is a signed pledge to work collectively and responsibly; and an effort called Deliver Care with Professionalism, Excellence, Accountability, Compassion and Enjoyment (PEACE).

Jackson described this all as occurring among a new vision for the future of St. Vincent Hospital.

“One of the things we’re really focused on is what is the future of St. Vincent Hospital and how does it look different than the hospital pre-strike and pre-pandemic,” Jackson said. “We’ve set our sights on being what we call the ‘dream provider’ — the high-quality, low-cost, high-efficiency provider.

“Health care has a lot of inefficiencies as people are aware, but we’re a hospital that is big enough to do complex services, but small enough that we can be nimble and make improvements. We want to make sure you get the right care at the right time at the right place.”

Jackson said this effort will result in “service enhancements” being announced in the next few weeks.

But for now, the focus is on reorientation, healing and overcoming COVID.