This action comes after a year marked by voting restrictions by state legislatures across the nation. “For New York City to do this really draws our attention to these questions: How do we think about democracy? Who’s included? Who’s excluded?" 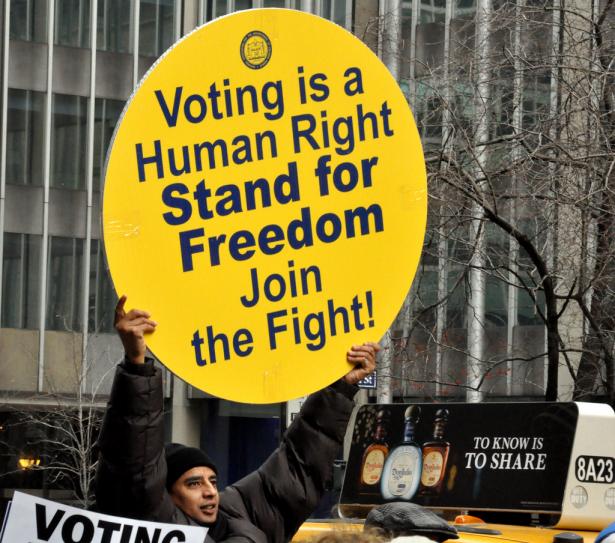 New York City lawmakers approved a historic measure on Thursday to grant hundreds of thousands of non-citizens the right to vote in local elections, setting the stage for a broader battle between supporters who want to expand immigrants’ voting rights and critics who think the move devalues citizenship.

The new measure, which will become law within 30 days if it’s not vetoed or earlier if the mayor signs it before then, is expected to apply to more than 800,000 non-citizens who will soon be able to cast a vote for mayor, public advocate, city council members and other municipal candidates. It covers legal permanent residents who have lived in the city for at least 30 consecutive days and are green card holders or are legally authorized to work in the U.S. They will not be permitted to vote in state and federal elections.

Immigration advocates in New York City and other parts of the country have been rallying behind the effort to give voting rights to non-citizens for years, saying they have long been an integral part of the community both as taxpayers and essential workers who deserve a say in local government.

New York City is set to be the largest U.S. jurisdiction to allow non-citizen residents to vote in local elections regardless of citizenship or immigration status, joining about a dozen smaller cities and towns in the U.S., including several towns in Maryland and Vermont. A handful of other major cities, including Washington D.C. and Portland, Maine, have recently considered similar changes.

New York City Councilman Ydanis Rodriguez, an immigrant from the Dominican Republic who became a U.S. citizen in 2000 and sponsored the bill, hopes the measure will encourage people running for public office to pay more attention to immigrant communities.

“Anyone who would like to be elected for a citywide office will have to spend the same amount of time visiting those communities—not only to celebrate their culture by dancing and eating their food—but discussing their platforms and agendas,” Rodriguez says. “They will have to dedicate the same time in those working-class communities that they dedicate in middle- and upper-class communities.”

Rodriguez and other supporters of the measure are optimistic that New York’s move will encourage other cities to follow.

“When New York City does something, it ripples across the nation,” says Murad Awawdeh, executive director of the New York Immigration Coalition. “We want to make sure that what we’re doing here is really leading the way for others to also think about how they can enfranchise immigrants in their own cities.”

Critics of the measure, including City Council minority leader Joseph Borelli, say it devalues the votes of U.S. citizens. Borelli has questioned whether paying taxes should serve as a reason to be able to vote, noting that even tourists pay hotel occupancy and sales tax. “I’m sure Democrats wouldn’t want to keep the standard for voting tax-paying,” he says. Borelli anticipates that the measure will spark legal challenges.

Although New York City Mayor Bill de Blasio has raised concerns about the possibility of the measure dissuading individuals from pursuing citizenship, he said last month that he would not veto the measure if it passed.

Similar provisions in other parts of the country have also met resistance. In September, the Republican National Committee sued two Vermont towns for allowing non-citizens to vote in local elections, calling it a “radical scheme…to allow foreign citizens to decide American elections.” At least five state legislatures, including Alabama, Arizona, Colorado, Florida and North Dakota, have taken steps to preempt any such provisions.

Voting rights in America were not always tied to citizenship. From the founding of the country until 1926, 40 states allowed non-citizens to vote at various times throughout America’s history, some of them not just in local elections but state and federal ones, too.

The question of who can vote has changed over the centuries to include African Americans, women and younger voters, points out Ron Hayduk, a political science professor at San Francisco State University and author of Democracy for All: Restoring Immigrant Voting Rights in the United States. “You can think of democracy as an evolving practice,” he says.

New York City’s vast expansion of residents’ voting rights comes at the tail end of a year marked by a spate of voting restrictions passed by state legislatures across the nation. Hayduk says the city’s move puts the issue of who gets to participate in American democracy on the national agenda in a new and unprecedented way.

“For New York City to do this really draws our attention to these questions: How do we think about democracy? Who’s included? Who’s excluded?” Hayduk says. New York’s decision “really firmly says, ‘Hey, we are an immigrant city, these are real New Yorkers and we want to make immigrant rights real by giving them a real voice.’”

For Eva Santos, a mother of three and a DACA recipient who immigrated from the Dominican Republic, the measure helps her feel recognized as somebody who works in New York City, files taxes, and deserves a say in how the city is run.

“All of my children were born in New York City,” Santos says. “I want to be able to help elect representatives who will make decisions that have my children’s futures, their safety, and their best interest at heart, just like any parent who is a U.S. citizen would.”