Six Supreme Court ideologues have defied science, common sense and established law. Thousands will die of covid as a result. 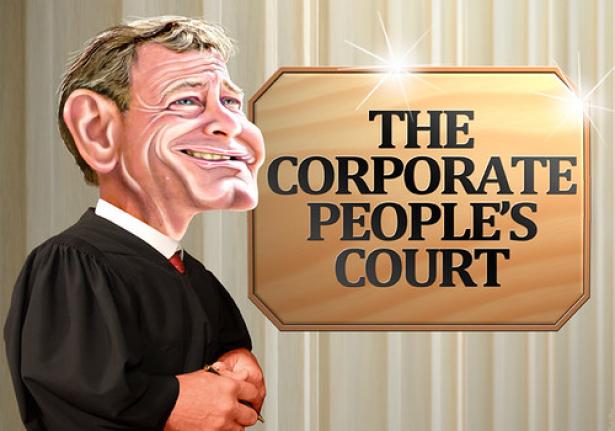 Judge Johnny, star of the Corporate People's Court ,by DonkeyHotey is licensed under CC BY 2.0

When the Supreme Court blocked OSHA’s vaccine-or-test mandate on Thursday while upholding the Centers for Medicare & Medicaid Services’ vaccine requirement for all health workers, you might think this was a split decision with the justices just calling balls and strikes. You’d be dead wrong.

This was a hyper-partisan decision that will eviscerate President Biden’s COVID-19 strategy.

First let’s discuss just how hypocritical the six conservative justices are. The court insists on some of the strictest COVID-19 policy rules in the nation. All attorneys must take a PCR test and wear N95 or KN95 masks in court. But what they demand for themselves they deny to a construction or assembly worker. In other words, the most privileged can protect themselves, but they would deny that protection to everyday workersThe Supreme Court’s decision will directly result in thousands of preventable deaths.

We’ve been stuck at a vaccination rate of just over 60 percent, and far lower for boosters. That places us near the bottom of our peer nations. The president’s only shot at boosting vaccination coverage was his large business mandate, which would have reached 85 million workers. By comparison, the CMS mandate is small change because most health workers are already vaccinated and large hospitals already require it. OSHA itself estimated its rule would save the lives of 6,500 workers, but that doesn’t factor in the lives of family members and others that a mandate would also have protected.

The disastrous ruling will hit especially hard in red states where governors are fiercely opposed to mandates. States like Florida, Texas, and Arkansas actually ban employers from requiring vaccinations, even if employers think it’s a smart business decision, which it is. And the OSHA rule would have provided political cover to business leaders worried about facing a public and political backlash. It also would have preempted anti-vax state laws.

Let’s examine the court’s reasoning. The justices were clearly hostile from the start about big, bold federal regulation. They kept calling OSHA’s rule a vaccine mandate, which it isn’t. Employees can simply be tested and masked—a really basic workplace safety strategy, and hardly an overreach.

The justices also were hostile to the idea that OSHA could set any safety rules for COVID-19. After all, the pandemic affects all parts of society and isn’t unique to the workplace. That’s true but it ignores two fundamental legal issues. First, Congress explicitly granted OSHA the power to regulate workplace safety hazards and didn’t insist that those hazards apply exclusively to the workplace. If the court were just calling balls and strikes, they would be faithful to the text of the Occupational Safety and Health Act.

Second, COVID-19 does create a unique workplace risk. There’s no other place where people spend eight hours a day crowded together with strangers—not in grocery stores, restaurants, or even concerts. And here’s the thing: Most Americans have no choice but to earn a living. They deserve to work in a healthy and safe environment.

The justices made a big deal out of the fact that OSHA’s rule would have huge economic impacts in the private sector. But OSHA has set countless rules that incur major costs on employers. The vaccine-or-test mandate is hardly unique in that regard, and it would have applied only to large businesses while most OSHA rules apply to all businesses. The court went headstrong into the so-called “major questions” doctrine, which casts major doubt on any regulatory action that has large political or economic impacts. If Congress were not allowed to delegate major powers to regulatory agencies, it would unravel not just what OSHA does, but also CDC, FDA, and EPA. It places at risk federal protection against dangerous consumer products, unsafe food and drugs, and nuclear or chemical hazards, just to name a few.

As Justices Breyer, Sotomayor, and Kagan said in dissent, the OSHA rule is indeed far-reaching. But it reflects the scope of the crisis—a health emergency unprecedented in the nation’s history, having killed more than 800,000 Americans to date, with a new variant so infectious that it poses grave risks in shared indoor spaces that are the hallmark of American working life.

Never before has a health emergency been so politically divisive. And never before has a president had to contend with a majority of justices so ideologically bent on blocking commonsense health and safety regulations.