In the context of the stymied efforts to expand Medicare at the national level, state efforts show where the real action is. There the terrain for winning universal, publicly-financed comprehensive healthcare looks increasingly favorable.

February 5, 2022 Michael Lighty In These Times
Printer friendly
States Now Hold the Key to Making Medicare for All a Reality Published February 5, 2022 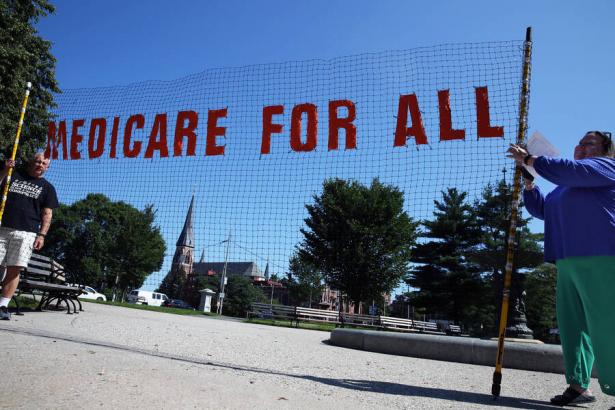 The Democrats’ omnibus Build Back Better plan, which includes an expansion of healthcare benefits through bolstering the Affordable Care Act, is currently stalled in the Senate. President Biden has so far made no push to enact a public option, as he campaigned on. And Medicare for All — a cornerstone issue in the 2020 Democratic primary — is not on the party’s current congressional agenda. But that doesn’t mean that the movement to achieve universal healthcare is slowing down.

A significant but under-reported story in the field of healthcare reform is the growing effort to establish Medicare for All-type systems at the state level. Across the country, elected officials and movement organizers have joined forces to make single payer a reality. And they’re building momentum.

In New York, after years of conservative control of the state Senate, progressives who campaigned in 2018 in support of the New York Health Act — a bill that would create a Medicare for All-style system — were elected to office. With these victories, a majority of legislators in both the state Assembly and Senate have now co-sponsored the bill. But in May 2021, a combination of privately reluctant legislators and some resistant unions, along with a lack of gubernatorial support, convinced the Democratic leadership not to bring the bill up for a vote in either house of the legislature. In response, the Campaign for New York Health — a coalition organizing for universal coverage — has promoted stories of people denied care because of insurance company practices and costs, conducted canvasses in key legislative districts, and reached out to unions and union members to address their concerns. The bill’s authors are also considering further amendments, and plan to continue their fight to pass the legislation.

In California, a nurse-led campaign has moved the single-payer bill AB 1400 onto the floor of the state Assembly for a vote in late January. A broad labor-community coalition — Healthy California Now — has organized petitions, letter-writing campaigns, and events around the state to urge Gov. Gavin Newsom (D‑CA) to fulfill his campaign promise of enacting single payer, universal healthcare. This month, he proposed to cover all undocumented people through the state’s Medi-Cal program. And in April, Newsom’s universal healthcare commission is expected to recommend a ​“unified financing” (akin to Medicare for All) healthcare system.

Advocates in Washington State, meanwhile, are currently recruiting petition captains for a signature-gathering effort to put a Medicare for All-type healthcare system on the November ballot, in a campaign called ​“Whole Washington.” Also in Washington, the organization-based coalition Healthcare is a Human Right is urging the state’s task force on universal healthcare to adopt a single-payer approach as it advocates for a bill to rein in health entity mergers and acquisitions that restrict access to care and pad the profits of corporate healthcare providers.

In Oregon, Health Care for All, a coalition of advocates, unions and community based organizations, is organizing to move the state’s universal healthcare task force toward a single-payer model. In November, Oregon voters will consider the HOPE amendment, sponsored by the coalition, to establish healthcare as a fundamental right in the state.

Rhode Island activists, working with the Providence chapter of the Democratic Socialists of America, have helped organize testimony in the state legislature, social media campaigns and pressure on state legislators to pass a state single payer bill, and are now building awareness around the effort to reach working people through the institutions they participate in, such as unions and faith organizations. In Minnesota, advocates led by labor union leaders — in particular the Minnesota Nurses Association — are signing up legislative supporters in preparation for favorable majorities in 2023 to move single payer legislation, which was considered this year in a House committee but has since been blocked by the Republican majority in the state Senate.

In Massachusetts, advocates are organizing ahead of the November 2022 ballot, which will ask residents whether they want local officials to back single payer, in districts where state representatives aren’t currently supporting a Medicare for All system. This effort is intended, in part, to inform constituents if their official is not a cosponsor of the current single payer bill in the state, and to help them take action, educate the district about Medicare for All, and demonstrate the wide support for universal healthcare.

In the context of the stymied efforts to expand Medicare at the national level, these state efforts show where the real action is. If we include the recent successful voter-led efforts in states such as Montana, Missouri and Maine to expand Medicaid, the terrain for winning universal, publicly-financed comprehensive healthcare looks increasingly favorable.

The current dichotomy between state and federal prospects for Medicare for All style reform reflects a difficult truth that motivated progressives in 2016 and 2020: it takes a president who champions single payer for it to have a chance politically at the national level. In its Build Back Better bill, the Biden administration has not even fought for the modest, incremental promises of the president’s campaign, such as lowering the Medicare eligibility age to 60 and including a public option. Instead of legislative action to expand healthcare as a public good, the administration is allowing private equity and other for-profit entities to have an expanded role within Medicare, continuing a ​“direct contracting” program begun by former President Trump.

In fact, the most popular elements of the House-passed Build Back Better bill are Medicare expansion and prescription drug price negotiations. Medicare for All polls at around 70 percent support among Democrats, majority support among independents, along with a good plurality of Republicans (mostly lower income). Yet not even a deadly pandemic has moved federal lawmakers closer to passing guaranteed healthcare for all. The Covid-19 crisis has revealed long-standing healthcare inequities based on race, exposed inadequate workplace protection and safety measures, made clear that employment-based health insurance is not reliable and shown the need for a more robust public health system. And still, we have the continuing disconnect between the need for a Medicare for All system and the lack of legislative action on it in Congress.

But the problem is not just the lack of strong leadership from the White House or Democratic leadership. The movement for Medicare for All at the federal level has also not yet created sufficient alliances with other movement groups and the electoral leverage and working-class organization necessary to overcome the money and power of the pharmaceutical companies, the insurance industry and the corporate hospital chains. These are the key institutional players that dictate health policy. Private equity has become a major stakeholder in the healthcare industry and a powerful lobbying force, leading to Wall Street control over our access to healthcare.

Historically, the Democratic Party and the organized labor movement championed the social insurance model of Medicare and fought to win it for everybody. But starting in 1993, when the AFL-CIO voted to support then-President Bill Clinton’s modest plan for healthcare reform over demanding Medicare for All from the new administration, much of the mainstream U.S. labor movement followed the lead of the Democrats who largely abandoned their commitment to social insurance. This neoliberal capitulation to the ​“free market” has stayed in place under subsequent Democratic administrations with the passage and institutionalization of the Affordable Care Act, expansion of for-profit entities within Medicare and Medicaid, and the rising costs, restricted access and increasing profits of the healthcare industry.

Labor hasn’t been absent in this fight. The AFL-CIO has passed resolutions in support of social insurance and Medicare for All since 2009, for example, and there was broad labor support for the Medicare for All Act in 2019. Yet the consensus among major labor unions has reverted to the view, expressed by former President Obama and establishment Democrats, that, while single payer would be ideal if we were starting from scratch, Congress will never pass it, so its not a priority.

So naturally, advocates look to where they can build the base of activist, organizational and popular support. That’s not to say the insurance industry or the pharmaceutical companies are without power at the state level. They hold control over many state legislatures and healthcare regulators. But in some Democratic states, the prospect exists in the shorter term of building the alliances, labor support and movement power necessary to counter their money and influence.

Vermont’s effort to enact single payer, which started in 2011 and ended in 2014, is often cited by opponents as proof such state-level efforts can’t succeed. However, the program passed by the legislature that provided guaranteed healthcare to all residents enjoyed widespread popularity, yet faltered once when the governor, Democrat Peter Shumlin, lost a political majority in the state legislature in 2014 and did not have access to the full support of the federal resources of the Affordable Care Act which had not yet gone into effect. Despite the setbacks, Shumlin and other Medicare for All advocates are undeterred in their continued quest to make healthcare a right, not a privilege.

A model for the country

Significant unions at the state level support single payer — SEIU in Oregon, California Nurses Association, National Union of Healthcare Workers, SEIU 1199 and the New York State Nurses Association. That’s on top of the many grassroots organizations and coalitions fighting for universal coverage. Local level support and organizing opportunities reflect the political value of state-based advocacy. For states to implement single payer, they don’t need federal legislation, only an administrative waiver, which Biden’s Secretary of Health and Human Services Xavier Becerra, a longtime Medicare for All backer, could easily approve.

Winning single payer in key states like New York and California could help demonstrate that the system works and compel Democrats in Congress to act. This is a political strategy reflecting the reality that Medicare for All advocates face federally. State organizing helps build the base that will be required to ultimately win guaranteed healthcare for all. And, perhaps surprisingly, we now have strong opportunities to do just that.

Michael Lighty is an organizer with the National Union of Healthcare Workers and a Healthy California NOW leader. He previously served as the Director of Public Policy for National Nurses United and the California Nurses Association. Follow him on Twitter: @mlighty60