There is still a lot of uncertainty about what the court will do. The decision could fall anywhere in between the two extremes laid out in this article. We’ll just have to wait and see; a decision could come down any day. 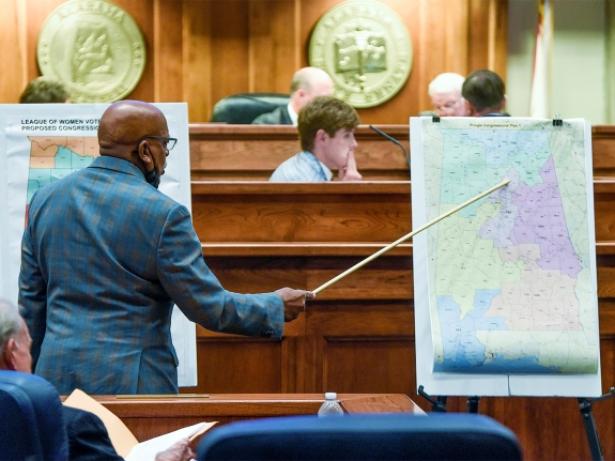 On Jan. 24, Alabama became the second state (after Ohio) to have its new congressional map struck down in court. But while Ohio’s map was thrown out by the state Supreme Court for violating the state constitution, Alabama’s was overturned by three federal judges who determined the map short-changed Black voters of representation in Congress. That’s a significant difference because it will require the Supreme Court to weigh in, potentially reshaping federal law in the process. As a result, the ruling could reverberate far beyond Alabama. It could open the door for increased nonwhite representation in other states, too — if it holds up on appeal.

As a refresher, the U.S. Supreme Court ruled in 2019 that partisan gerrymandering was a political question that federal courts should not adjudicate. However, they can still hear cases relating to racial gerrymandering — i.e., whether a map discriminates against voters of a certain race. Alabama poses just such a question. Back in November 2021, Alabama’s Republican-controlled legislature passed a new congressional map that created six majority-white districts and just one majority-Black district. Civil-rights advocates sued, arguing that Black voters in the state were entitled to a second district under the Voting Rights Act, the landmark law that prohibits racial discrimination in voting.

Under Section 2 of the VRA, it’s illegal to deny members of a racial minority equal opportunity to elect representatives of their choice. This has been widely interpreted to mean that, when possible,1 states must draw congressional districts where nonwhite voters are the dominant voting bloc, so as to reasonably ensure they can elect their preferred candidate.

And as maps proposed by the plaintiffs demonstrated, it is readily possible to draw two predominantly Black congressional districts in Alabama. For example, in the plaintiffs’ illustrative plan A, the 2nd District’s voting-age population (VAP) is 50.0 percent Black, and the 7th District’s VAP is 50.3 percent Black. 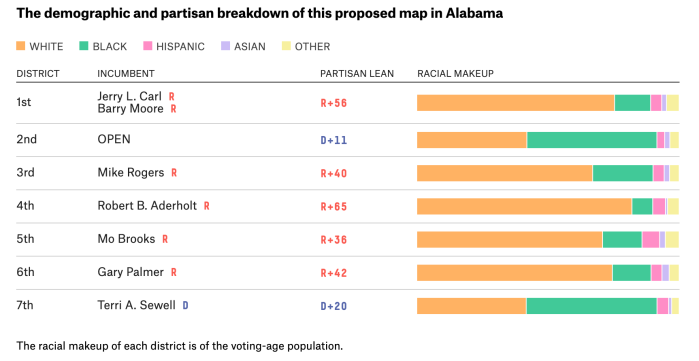 While the VRA explicitly states that racial minorities are not automatically entitled to a number of seats proportional to their share of the population, Black people constitute more than 25 percent of Alabama’s VAP, much larger than the share of congressional districts they predominate in (14 percent). And many Black votes would have been wasted under the overturned map, with the majority-white 1st, 2nd and 3rd districts all having at least a 24 percent Black VAP.

As a result, the judges gave the Alabama Legislature until Feb. 11 to draw a new map that “include[s] two districts in which Black voters either comprise a voting-age majority or something quite close to it.” But by then, it’s possible that the judges’ decision will have been overturned anyway. Alabama has appealed the ruling to the Supreme Court, arguing that the map should be reinstated because a new one would disrupt preparations for the state’s upcoming primary and improperly prioritize race in redistricting.

On one end of the spectrum, the Supreme Court could let the lower court’s ruling stand, which would have the immediate impact of adding a new Black-opportunity congressional seat in Alabama. (In practice, this would also add one Democrat and subtract one Republican from Alabama’s congressional delegation.) It would also have ripple effects throughout the Deep South. If this ruling stands, it could inspire courts to create additional Black-opportunity districts in Louisiana and maybe South Carolina as well.

Currently, only one of Louisiana’s six congressional districts is predominantly Black, despite the state having one of the country’s largest Black population shares: more than 30 percent of the VAP. With the state’s redistricting process just getting underway this week, Democrats have already proposed multiple congressional maps that would add a majority-Black seat along the Mississippi River north of Baton Rouge. For example, under Senate Bill 4, the 2nd District would have a VAP that’s 51.5 percent Black and the 5th District would have a VAP that’s 50.5 percent Black.

Because Republicans control the Louisiana Legislature (and these maps would eliminate a Republican member of Congress), they may not be inclined to pass any of these maps. But Gov. John Bel Edwards is a Democrat, and he’s already come out in favor of a second predominantly Black district. Republicans also lack the numbers in the state House to override a potential veto (although they’d only need to convince two independents or conservative Democrats to side with them to do so). That means Louisiana redistricting will probably be decided by the local courts, which would likely follow the Supreme Court’s lead and greenlight a second Black-opportunity district — if that’s what the high court decides to do in Alabama.

Meanwhile, South Carolina has already enacted a new congressional map with only one predominantly Black district out of seven, despite the fact that the Palmetto State is almost one-quarter Black by VAP. However, simple geography may make it harder to convince a court to order a redraw here. While it’s possible to draw two congressional districts for South Carolina with VAPs that are around 40 percent Black, it’s difficult to draw two majority-Black districts without some serious contortions.

According to Supreme Court precedent, plaintiffs in a VRA redistricting case must show that the minority group is “sufficiently large and geographically compact to constitute a majority in a single-member district.” (Confusingly, a district doesn’t have to be majority-minority in order to comply with the VRA,2 but it has to be possible to draw one in order for a non-majority-minority district to violate it.) South Carolina may not satisfy this test in a court’s eyes — though, in the event of a favorable outcome at the Supreme Court, liberals may very well try their luck just in case.

With or without South Carolina, though, the Supreme Court letting the Alabama ruling stand would be a significant boon to Black representation in Congress — and from a region that has historically suppressed Black voters to boot. It could potentially lead to two, maybe three, new Black members of Congress from the Deep South. As a result, as many as 18 percent of U.S. representatives from states that constituted the former Confederacy could be Black — the most in U.S. history.3

Black representation in the South could reach a new high

Black share of U.S. House members from the 11 states that formed the Confederacy, by first year of each Congress, since 1869* 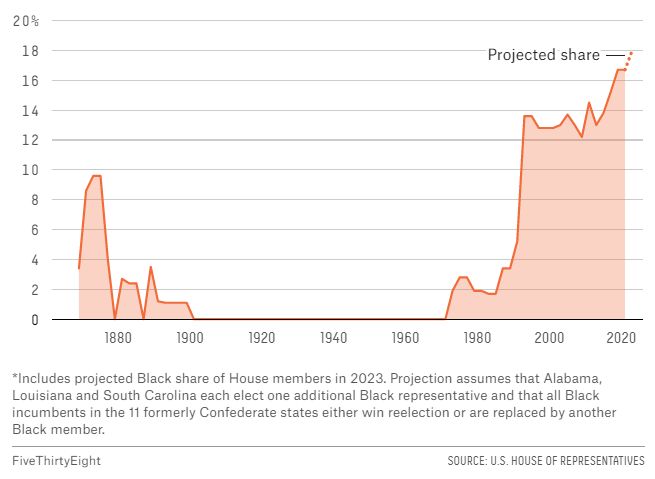 Again, though, that’s the best-case scenario for minority representation. Given the conservative ideology of the Supreme Court, the justices could instead overturn the lower court’s ruling and restore Alabama’s 6-1 map. It’s even possible that, in so doing, they will actually weaken the VRA’s protections of minority districts. Under Chief Justice John Roberts, the court has already neutered Section 5 of the act and watered down other protections under Section 2; in an extreme scenario, it could reinterpret Section 2 in a way that makes it even easier for states to draw discriminatory maps.

However, there is still a lot of uncertainty about what the court will do, and as we said earlier, the decision could fall anywhere in between the two extremes we’ve laid out in this article. We’ll just have to wait and see; a decision could come down any day now.

Nathaniel Rakich is a senior elections analyst at FiveThirtyEight.   @baseballot