In the 1770s, First Smallpox Vaccinator was Abused, Not Thanked

When rumors of Jesty’s “bold experiment” spread, the reaction was brutal. The upstanding farmer became the target of vicious attacks from neighbors who were appalled that he had experimented on his own family. 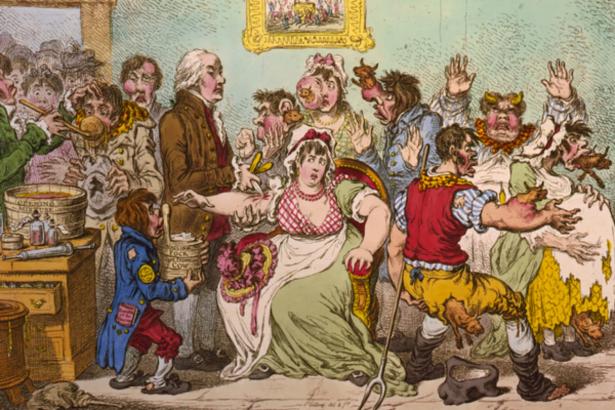 "The Cow-Pock—or—the Wonderful Effects of the New Inoculation! ", James Gilray, 1802,

In his haste to leave Upbury Farm in Yetminster, Benjamin Jesty did not even bother to mend the broken gates and fences for the new owner. He didn’t care about paying the heavy fine for the infraction, as was customary in 1796. Jesty, a farmer in his mid-sixties, hefty, balding, with a reveried gaze, was too eager for a fresh start. His family of eight packed their possessions and moved to Downshay Farm in Worth Matravers, a village forty miles away on the Isle of Purbeck. It was an opportunity he surely wished had come sooner—to work on a much larger farm, live in a spacious manor, breath salt-suffused ocean air, and flee a life of infamy in Yetminster.

For over twenty years, Jesty had lived under a dark cloud of scorn. It was in 1774, when smallpox again threatened the English countryside, that Jesty experimented with his family. He was not a doctor, nor a man of science, but a plain farmer with an ordinary education. Jesty probably did not even consider his deed an experiment, but the best way to protect his wife and children.

Coming from generations of dairy farmers, Jesty knew the folklore about a certain farm disease well. Cowpox—a pesky infection farmers occasionally saw in the spring, manifested as reddish bumps that enlarged and erupted like craters on a cow’s udders. Milkmaids, farm hands, farmers—anyone who touched the teats often got infected and developed the telltale lumps and ulcers on their hands. Fortunately, they rarely became seriously ill and all of them seemed to gain an immunity from smallpox. Jesty himself had been infected as a young man and carried the scar on his hand like a branding burn. And in the decades that smallpox had come and gone, it had never afflicted him. His two dairymaids had the same experience as they cared for sick relatives without fear of contracting smallpox. It thus made perfect sense to Jesty that deliberately infecting his wife and children with cowpox offered the best protection against smallpox.

As a respected community leader in Yetminster, Jesty had served as parish Overseer of the Poor and a member of the church vestry. He had helped provide financial aid to needy families and had organized doctors to inoculate people against smallpox. During this time, the word “vaccination” did not exist; instead, the process was called variolation. This well-established practice provided doctors and apothecaries a lucrative livelihood. It was a simple procedure: after cutting a person’s forearm with a lancet, doctors introduced either crushed scabs or fluid from a boil of a patient with active smallpox infection. Most people probably developed mild disease and gained immunity. Some of the unfortunate ones became covered in disfiguring sores and spiraled into fulminant illness and death.

Jesty believed replacing smallpox matter with cowpox was the safer approach. One spring day in 1774, Jesty set out with his wife, Mary, and their two toddlers, to a neighboring farm in Chetnole in search of a suitably cowpox-infected cow. Finding one, Jesty pulled out a long stocking needle, jabbed it into the cowpox lesion, and then punctured his wife’s arm with the contaminated tip. He did the same with his sons—three-year-old Robert and two-year-old Benjamin. The boys remained well, with no ill effects. Mary, however, developed an infection and swelling in her arm that required extended medical care. Fortunately, she survived. 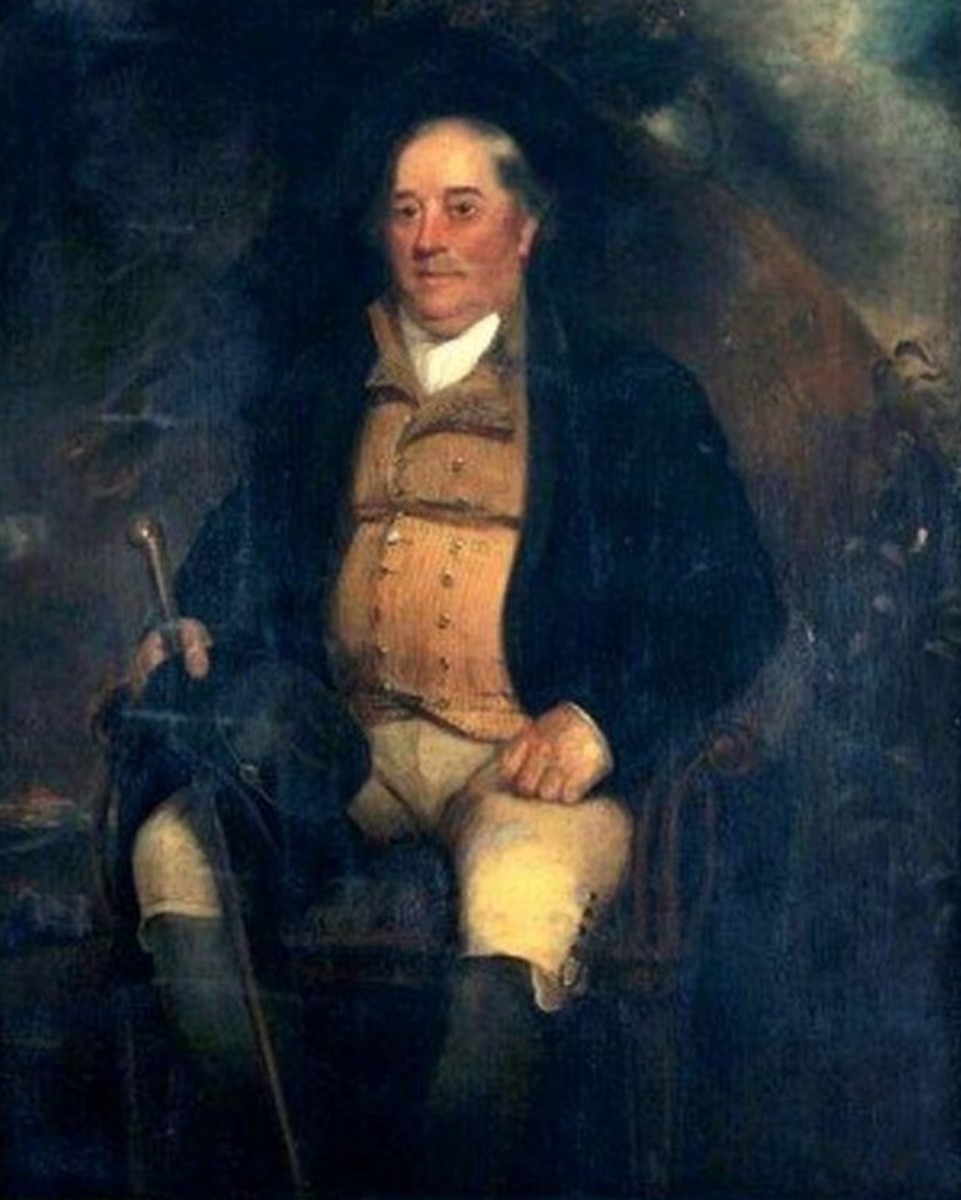 When rumors of Jesty’s “bold experiment” spread, the reaction was brutal. The upstanding farmer became the target of vicious attacks from neighbors who were appalled that he had experimented on his own family. Even worse, he had introduced matter from a “brute”—a creature without a soul—into human beings. The scandalous notion was unthinkable, disgusting, and a sacrilege. Jesty was pelted and jeered whenever he ventured into the village market. Such was the sentiment that when a local doctor hinted a similar idea, objections were so intense that he nearly lost his practice.

Jesty defended his actions, arguing that a docile cow did not carry human diseases like syphilis or madness. He simply believed inoculating with cowpox was safer and provided the same protection from smallpox. Jesty reproached his accusers, describing them as worse brutes than cows. Despite the hostility, Jesty continued his civic duties and tried to live a quiet life as he waited for the furor to die down. Mary and the boys never got smallpox.

Twenty years later, Dr. Edward Jenner released his famous self-published paper on vaccination using cowpox material. There was no evidence that he knew of Jesty’s deed and Jenner faced his own intense critics as his fame swelled. One of the most vigorous was William Rowley, a physician who argued that it was impossible to eradicate smallpox. Jenner had good intentions, Crowley patronizingly wrote; but vaccinating with cowpox, “the filthy disease of beasts,” was turning people into animals. A report he published in 1805 included a sketch of a “Cow-Poxed Ox-Faced Boy,” showing a pink-cheeked young man with a swollen, expanding face that seemed in a state of transformation. Crowley laid out, point by point, how “specious and fallacious” the facts were on vaccination, and that the established practice of variolation was more beneficial, safer, and consistent with Christian faith. Caricatures of Jenner and vaccinated people growing horns and hooves soon appeared in publications.

Slowly, painstakingly, history would prove the universal benefit of smallpox vaccination. In May 1980, following a ten-year global push that administered half a billion vaccinations, the 33rd World Health Assembly finally declared the end of smallpox.

Modern day arguments on vaccination have, of course, become more sophisticated, more nuanced and complex. Passion on both sides of the debate, however, seems undiminished since the 18th century. And there’s no reason to believe that will ever change, no matter how advanced our knowledge grows, no matter how many epidemics are averted.

Rod Tanchanco writes medically-themed non-fiction focused on historical events and their human narratives. He is the author of First Patients and his articles have appeared in Time.com, TheAtlantic.com, History News Network, Intima, Medical Economics, and KevinMD.com. He is an internist, Fellow in the American College of Physicians, with three decades of experience. Rod has worked as a primary care physician, hospitalist, research doctor, and medical director for global healthcare organizations.