The labor movement has lost one of its greatest organizers.   On February 15, 2022, Edward Kay—known as Eddie—passed away at the age of 89.  He will be greatly missed. 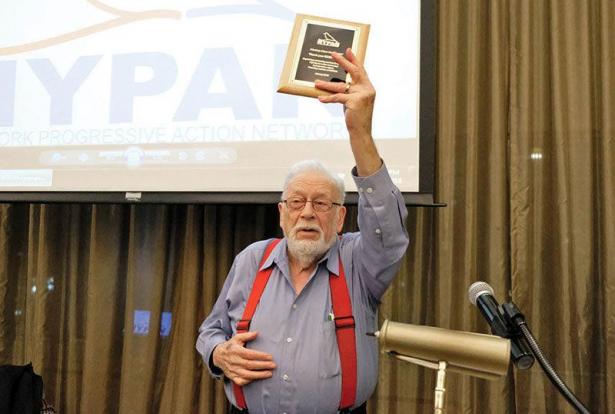 Hats Off to Eddie,The Chief Leader

The labor movement has lost one of its greatest organizers.   On February 15, 2022, Edward Kay—known as Eddie—passed away at the age of 89.  He will be greatly missed.

Eddie was a long-time leader of Local 1199, the Hospital and Healthcare workers union.  After being an active rank-and-filer in the retail drug division from 1962-1967, Eddie was hired on to the staff by organizing director Elliot Godoff. He soon became an Area director of the Queens-Long Island division.  Eddie essentially built 1199 in Queens and Long Island, organizing many hospitals and numerous nursing homes.  He also led other organizing drives in 1199, most notably leading the successful organizing drive at Presbyterian Hospital, one of the largest medical centers in the country. Even more astounding was how he built up such a powerful militant and rank-and-file centered organization in his area, and then sustained a vibrant militant organization over decades.  He was not just a successful field organizer: organizing new members into the union.  Eddie was a master internal organizer, teaching ordinary workers to run their union, something all too rare in the labor movement.

In the years of the ‘60’s, 70’s, and ‘80’s, 1199 was constantly mobilizing: strike support, solidarity with 1199’s organizing efforts in New York and other states, and for civil rights, and solidarity with other labor unions.  Invariably the area that produced the most member participation was Eddie’s area of Queens-Long Island, in spite of the fact that workers had to travel further than other areas. Since the Queens-Long Island division consisted of many small shops compared with other areas, mobilizations were more challenging, and yet workers participated in high numbers.

These were the years that 1199 was being built in other parts of the country including Connecticut.   Jerry Brown, the long time leader of 1199 in Connecticut, reflected on the numerous times when Eddie brought an army of members to support him in one strike or another. In one instance Eddie was able to get the evening shift of one hospital to come in two hours early and work those hours for free in order to allow the day shift to be released two hours early so the workers could go up to a rally in Connecticut.  Eddie said,

“We got mobs of people.  Because we got the other workers … to give two free hours, one free hour. … That is such a joy, that workers would give up two hours…  They have to really want to do it.  That’s why we had thousands of people there.  … It was less important of why they knew they were going—even though that’s important—and more important that they felt they owned the union. … That they were treated with respect by the boss.  That’s the key.”

Witnessing union demonstrations that took place in the Queens-Long Island Area during the ‘70’s and ‘80’s was like being in a different world, even though 1199 was a very militant union everywhere in those years.  It was not just the greater numbers of workers that made those mobilizations stand out.  It was the fact that they were run by the members.  It was the incredible energy of the event.  In 1199, as in many unions, telling the members that “you are the union” had become a cliché.  When workers actually take ownership of their union, it is something very powerful.  Eddie managed to achieve this rare feat, and to sustain it over many years.

Eddie understood organizing in very stark class struggle terms.  He always preached how important it was to pick fights with the boss in the beginning that one could win.  This in turn would build confidence in the members, and help them overcome their fear.  He saw every grievance as a skirmish in this bigger battle.  He worked himself and his staff hard to carry out this vision, involving the members in everything, whether big or small, that occurred in the shop.  Eddie would hold weekly team meetings with his staff that could last hours.   Stan Israel, who worked under Eddie in 1199 for many years (later becoming head of the Rhode Island area of 1199 NE) described those meetings:

“The first question out of his mouth was ‘Who’d you talk to?  Who’d they talk to?  What are they doing?  They’ll do it—you’ve got to ask them.’  Eddie was always clear on two things:  Did we talk to the delegates [shop stewards] who were the leaders?  Did we involve other people?  Then we figured out how to solve the problem.”

In the early eighties 1199 came under new leadership that turned away from the progressive unionism that had characterized it from its founding.  Many of the most progressive organizers and officers, including Eddie, were purged.  The union reached its low point with a disastrously mismanaged strike in 1984.  This led to a rank-and-file movement to bring back the progressive and militant unionism of its roots.   This movement was known as Save Our Union.  It involved hundreds of rank-and-filers among its leaders.  However, there is no doubt that Save Our Union’s effective organizing director was Eddie Kay.  Eddie was essentially directing an organizing drive covering 80,000 members spread over 5 boroughs of New York City plus Long Island, encompassing scores of hospitals and nursing homes, as well as numerous clinics. To make matters more challenging, he was doing this without any full-time staff; just member activists who all had full time jobs.  The Save Our Union slate won a close election in 1986.  While many people made key contributions, there is no doubt that Eddie’s organizational genius and drive were absolutely key ingredients to the victory.  Eddie would serve in the leadership of 1199 until his retirement in 1999.  His influence on a whole generation of leaders in 1199 was incalculable.

Eddie retired from 1199, but he didn’t retire from the labor movement.  He continued to work with unions, mainly training rank-and-file leadership, helping workers take control of their unions.  Among the countless unions he worked with were the TWU Local 100, the laborers union (asbestos workers), the ATU (bus drivers in Staten Island), Mail Carriers, and many others.  His success rate was phenomenal.  He always preached, don’t do for the workers; rather build the workers confidence and organization so that they can do for themselves.  He specifically advocated for empowering workers on the shop floor, whatever that particular industry was.  Anyone who has ever worked in the position of an internal organizer knows how hard it is to do this in practice, much less do it consistently over a period of years.  Eddie organized this way his whole life, and constantly developed workers who understood and could lead their own organizations, wherever he went.

Eddie’s legacy includes training a whole generation of leaders, both in 1199 and in the unions where he subsequently worked.  Stan Israel summed up Eddie perfectly: “He could talk to someone with a doctorate and he could talk to someone that hadn’t been to school a day in their life.  At some point they’ll both follow him through the door. … Without a doubt, Eddie’s the greatest organizer I’ve ever met, bar none.”