The South's Schools Are Failing to Teach Accurate Reconstruction History

A Zinn Education Project report is a resource to help people press for more rigorous and truthful teaching of Reconstruction history, and to counter the "anti-history" proposals that are under consideration in 37 states. 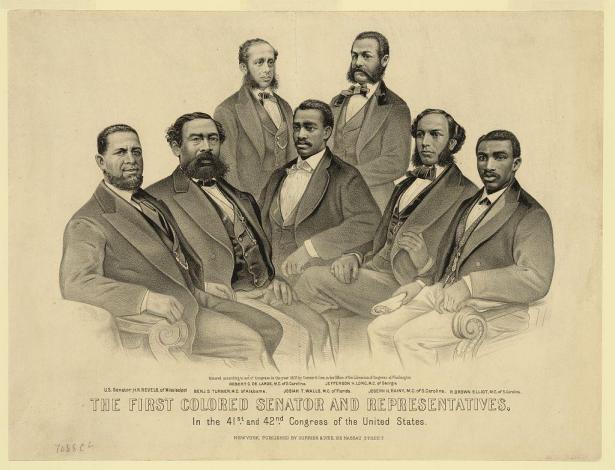 The Reconstruction era following the Civil War brought significant racial progress, but its lessons are not being well taught in schools across the South and nation, a new report finds,Currier & Ives print via Library of Congress.

"One cannot study Reconstruction without first frankly facing the facts of universal lying," wrote Du Bois. Although current scholars by and large no longer subscribe to Dunning's blatant misrepresentation of history, a report released last month by the Zinn Education Project found that the Dunning School's influence is present in more than a dozen states' educational standards and curricula and continues to shape ongoing disputes over the meaning of the Reconstruction era, which has been called the "first experiment in genuine interracial democracy in the South" by noted U.S. political historian Eric Foner.

During Reconstruction, Black Americans enjoyed a period of racial progress and electoral influence that reshaped the political landscape of the South and the nation. In partnership with progressive whites, Black freedmen rewrote state constitutions to adopt progressive reforms related to public education, voting rights, labor rights, and protections against racial discrimination.

For example, during South Carolina's constitutional convention of 1868 delegates approved a new constitution that provided for public education, abolished property ownership as a qualification for office holding, granted some rights to women, and provided aid for poor farmers. These advancements were short lived because of concerted efforts by white supremacists to undermine Black political freedom and restore the South's racial hierarchy. As Foner has written, "The overthrow of the South's biracial governments, accomplished in part by terrorist violence, was followed by a long period of legally enforced white supremacy."

The Zinn Education Project report, titled "Erasing the Black Freedom Struggle: How State Standards Fail to Teach the Truth About Reconstruction," was released in January as part of a broader campaign to examine how state social studies standards across the United States present Reconstruction history. It includes lessons and suggestions of books and films for teaching about Reconstruction outside the textbook and discusses obstacles to an honest discussion of the era.

"The report describes an array of additional barriers to the teaching of Reconstruction — including a lack of collaborative professional development, pedagogical materials, funding and time for educators to dedicate to this history, compounded by the many ways standards miss the mark," wrote Mimi Eisen, co-author of the report and a program specialist for the Zinn Education Project.

The study used a rubric for evaluating learning standards that the Zinn Education Project developed in collaboration with scholars and teachers. The report found that most state standards on Reconstruction history focus solely on governmental actions while ignoring the grassroots political strategies developed by Black communities during this period. Among the 50 states and D.C., Hawai'i got the highest score of 7.5 out of a possible 10, while the average score was just shy of 2. Among the 13 Southern states* the average score was 2.5, with a high score of 6 in Louisiana and a low score of 0 in North Carolina. In all, 18 states received scores of 0.

"Because teachers are often pressured to 'teach to the test,' fruitful discussions about Black political, cultural, and economic autonomy, the potential of radical democratic participation, and the destruction of Reconstruction is lost," according to Theron Wilkerson, a Mississippi social studies teacher quoted in the report.

The report also found that many standards deny or disregard the prevalence of white supremacy and racial violence during this period. The study reports that Massachusetts is the only state that "directly links white supremacy to the rise of the KKK, the passage of Black Codes and Jim Crow laws, and the end of Reconstruction."

Furthermore, the report found that current standards for Reconstruction education fail to connect the period's legacy of racial justice and multiracial democracy with modern movements for social equality. The authors note that "the legacies of Reconstruction have assumed newfound significance in the ongoing battles over the nature of U.S. democracy, police brutality, and the deadly COVID-19 pandemic."

The report is designed to serve as a resource to help people press for a more rigorous and truthful teaching of Reconstruction history in K-12 classrooms as efforts to undermine accurate accounts of U.S. history have gained traction. Since January 2021 what some scholars have called "anti-history" proposals have been considered in 37 states — including all 13 in the South — limiting how teachers can talk about racial discrimination, according to an Education Week analysis.  There have also been local efforts to limit what students can be taught about racism.

The report offers several recommendations to counter these educational restrictions and ensure that state and local school districts can better prepare teachers and students to connect with the complex history of Reconstruction. They call for clear and consistent definitions of Reconstruction that center the meaning of freedom for Black Americans, assessing how much time is currently given to the Reconstruction era and developing plans to increase it, and critically reviewing the narrative in districts' textbooks and school curricula about Reconstruction to determine if it "highlights the bottom-up history and the era's social and political successes."

"It is our hope that states and districts will adopt these guidelines for their own educational standards, curricula, and professional development," the report states. "In so doing, they will be better equipped to teach students the true history of Reconstruction, help students understand its significance and make connections to the present day. And they will empower teachers to educate their students and themselves about ongoing Reconstruction scholarship."

Benjamin Barber is a research associate with Facing South, and a graduate student at the School of Social Policy & Practice at the University of Pennsylvania. He holds a bachelor's degree in history from Barton College in Wilson, North Carolina. Benjamin previously interned with the Equal Justice Initiative in Alabama and with Facing South, and he served as the historian for the North Carolina NAACP Youth and College Division. @Ben_Barber_