Robin Alexander’s account is a valuable people’s history, told from the U.S. side, filled with examples to be emulated, some pitfalls to avoid, and above all, boundless inspiration. 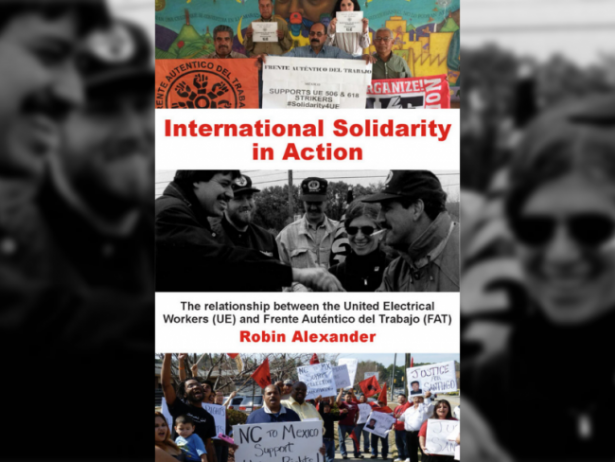 On February 3, workers at a General Motors plant in Silao, Mexico, secured an important victory for organized labor when a huge majority voted to join the Sindicato Independiente Nacional de Trabajadores y Trabajadoras de la Industria Automotriz (SINTTIA), an independent labor union. Major international media outlets such as The New York Times and Reuters covered the election, noting its historic importance. Organized labor in Mexico has long been infamous for charro unions, company unions that typically offer workers little actual recourse for improving workplace conditions or in negotiating better compensation. This situation has contributed to prolonged wage stagnation. As the Times reported: “Though the country has become one of the richest in Latin America, its workers still earn among the lowest salaries of almost any nation in the region. One important reason, economists say, is that for decades, Mexican workers have had little say in choosing the unions that represent them.”

The SINTTIA victory in Silao comes after decades of hard-fought struggles by independent and democratic labor unions in Mexico that have challenged hostile and sometimes violent anti-unionization campaigns. Their efforts have confronted employers, corrupt and entrenched charro unions, and the system of neoliberal globalization itself, manifest in structures such as the North American Free Trade Agreement (NAFTA) and the World Trade Organization (WTO) that pit workers in Mexico against their counterparts in the United States and Canada. “These deals were about putting US manufacturing workers in direct competition with much-lower-paid workers in the developing world...” economist (and my colleague) Dean Baker has written. “This also put downward pressure on the wages of the manufacturing workers who kept their jobs, as well as on the wages of less-educated workers more generally, since manufacturing has historically been a source of relatively high-paying employment for workers without college degrees.”

The effects of 28 years of NAFTA—and its successor, the U.S.-Mexico-Canada Agreement—on Mexico should surprise no one. As NAFTA was being debated in the early 1990s, Mexican President Carlos Salinas de Gortari claimed that the trade and investment arrangement would make Mexico a “first world” country and lift living standards up closer to those in the United States and Canada. But after 20 years, the poverty rate in Mexico was higher than in 1994 when NAFTA first went into effect.

Now that Mexico’s workers are having more of a say in choosing their union representation, will they finally start to see real improvements in how they live? It’s an important step in obtaining and exercising more power and agency to make further demands on the business sector and the government, and it is the latest chapter in a history of labor organizing and campaigns going back 30 years. International labor solidarity is also an important part of this story.

The new e-book, International Solidarity in Action: The Relationship Between the United Electrical Workers (UE) and Frente Auténtico del Trabajo, by Robin Alexander tells some of this history from a first-hand perspective. As the first International Affairs Director of the UE, Alexander was there at the start of cross-border labor union campaigning against NAFTA, through to the deal’s 20-year anniversary. It was their shared opposition to NAFTA that led the UE and the FAT, both independent unions, to develop a close working relationship, beginning in 1992. As Alexander details, the bonds between the two unions soon became much closer, and their combined efforts came to include support for shop organizing, strike support, fundraising, labor law reform, and other activities. Along the way, the FAT and other independent unions in Mexico scored historic victories, leading eventually to the labor law reforms that made organizing wins, like the one at Silao, possible. These included holding the first secret-ballot union election in Mexico’s history (in the early 1990s), and, along with the UE and other unions such as the Teamsters, lodging some of the first complaints under the North American Agreement on Labor Cooperation (NAALC), NAFTA’s labor side-agreement, in attempts to defend workers’ rights (in 1994).

The UE and the FAT would seem to be natural partners. Both are highly democratic in structure, with rank-and-file governance, and both are independent of labor union federations that might exert influence or control over their decisions and activities. This has allowed the unions to be out front in important struggles, and early labor opposition to NAFTA was one such case. The FAT was the only Mexican union to go to an initial, important pan-North American labor meeting in 1992 to organize against NAFTA. The UE, one of the only industrial unions to survive the McCarthy era purges of communists from U.S. labor, and which did not cooperate with the related witch hunts at the time, has long been independent of the major U.S.-Canadian union federation, the AFL-CIO. It was also one of the first unions to begin organizing across borders against NAFTA.

The reluctance of the AFL-CIO—as well as the Canadian Labor Congress—to partner with the FAT, even against as serious a threat as NAFTA, was itself a legacy of Cold War thinking and practice, stemming from the AFL-CIO and CLC belonging to the International Confederation of Free Trade Unions (ICFTU). Unlike the FAT, ICFTU Mexican labor partner the Confederación de Trabajadores de Mexico, which was closely aligned with Salinas’s political party (the PRI), supported NAFTA. The AFL-CIO would soon abandon this self-defeating stance and also partner with the FAT—an early example of how UE-FAT solidarity would lead to important changes.

Alexander recounts many examples of how exchanges between the two unions, and others in Canada, Japan, India, and elsewhere, enabled various forms of direct and concrete solidarity. These included meetings, speaking tours, shop visits, and other in-person travel that both gave rank-and-file members a political education and fostered solidarity and comradery among union members. These interactions often led U.S. and Canadian unionists to abandon previously xenophobic ideas about immigration and its root causes. “ONLY through a serious, concerted member-to-member international solidarity effort will U.S. workers understand that their boss at home is the same boss of workers abroad and then take the next step to link arms with these workers in an active international expression that ‘An injury to one IS an injury to all,’” Alexander quotes former UE president Peter Knowlton as saying.

This initiative, which came from Local 222…not only raised funds for UE’s allies in Mexico but became a mechanism for the local to engage its members and those of other UE locals in discussions about the importance of international solidarity. Each person who donated a dollar received a paper with an image of the number of symbolic bricks he or she had contributed. The campaign was subsequently adopted by UE’s Northeast Region, which proudly presented a check for $1,300 to the FAT representative who attended the UE convention that Fall as a contribution to the next phase of construction of the union hall in Guerrero, Chihuahua. In addition to raising funds for their sister union in Mexico, this effort helped to create a broader understanding of the UE’s international work within the union’s national membership, as well as education on the question of immigration.

International pressure from the UE also led to the reversal of public sector worker layoffs in Guerrero, which Alexander rightly recalls as “some amazingly effective international solidarity.”

As Alexander, a labor attorney, details, all of these efforts and others also facilitated historic changes to Mexican labor law that would pave the way for the growth of independent unions. Initial changes to labor law under former president Felipe Calderon in 2012 were “a serious step backward.” But Mexican union resistance, with international support from the UE and other U.S. and Canadian labor unions—as well as the U.S. and Canadian governments, which have seen Mexico’s pervasive and chronically low wages as an unfair trade advantage—led to the drafting of new, more union-friendly laws under the subsequent administration of Enrique Peña Nieto, and to more reforms under the current Andrés Manuel López Obrador government. Under López Obrador, following the renegotiation of NAFTA, workers have challenged unfair labor practices via the U.S.-Mexico-Canada Agreement, often with the support of unions in the United States and Canada.

These landmark reforms are the result of 30 years of struggle for more democratic unions, democratic workplaces, and the freedom for workers to choose independent union representation. While Mexican workers and their independent unions have definitely been the driving forces in pushing through meaningful and lasting advances for labor, international solidarity has been an important factor as well. As with countless other examples of societal advances through collective action, this is a history that might not be told accurately and honestly, if at all, except by those who were there. Robin Alexander’s account is a valuable people’s history, told from the U.S. side, filled with examples to be emulated, some pitfalls to avoid, and above all, boundless inspiration.

Dan Beeton is the International Communications Director of the Center for Economic and Policy Research (www.cepr.net).