The Milky Way Is a Messy Eater. This Map Shows the Crumbs It Has Left Behind 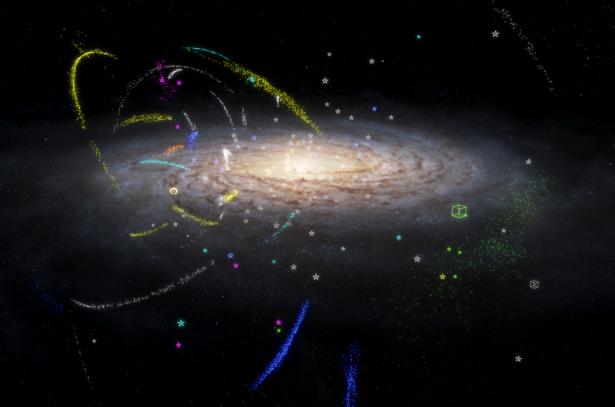 The Milky Way may seem like a tranquil place, but it has a turbulent past. Our home Galaxy has consumed at least half a dozen other galaxies during its roughly 13-billion-year history. Now, astronomers have begun to identify the remains of its meals smeared across the galactic halo, a huge spherical volume taking in the Milky Way’s spiral and much space beyond.

When a smaller galaxy strays too close to the Milky Way, its gravity pulls the visitor into an elongated string of stars known as a stellar stream that subsequently orbits in the halo. The meal leaves other crumbs, including smaller satellite galaxies that may have orbited the snacked-on galaxy and globular clusters—tightly bunched collections of thousands of stars held together by their mutual gravity. Astronomers have already identified a number of stellar streams from past mergers and used globular clusters to build a timeline of the Milky Way’s past meals.

In the new study, researchers have taken the latest data from the European Space Agency’s Gaia satellite—an observatory that has logged precise locations of 1 billion stars and accurate motions for many of them—and statistically analyzed the motion of 170 globular clusters (star symbols in the image above), 41 stellar streams, and 46 satellite galaxies (cubes). They describe today in The Astrophysical Journal how, for 62 of those objects, they were able to link them to one of five known mergers in the past (shown in different colors), and identified one previously unknown merger, which they have dubbed Pontus (shown in magenta).

The scientists hope that with further modeling and updated Gaia data they can construct an improved sequence of events for the mergers. And the Milky Way itself had better look out: It’s on course to be eaten itself—by the similar size Andromeda galaxy 4 billion years from now.

Look to the future with Science.
The discoveries and innovations that you read about in Science are destined to change the world as we know it. Join AAAS to access exclusive benefits including a subscription to Science and this limited-edition T-shirt.*

*Available to new AAAS Members at the Silver level or above