No one deserves riches, and yet we all do. This moral puzzle is key to our love for Anna Delvey, the con artist and “fake German heiress” who is the subject of Netflix’s flawed but irresistible series Inventing Anna. 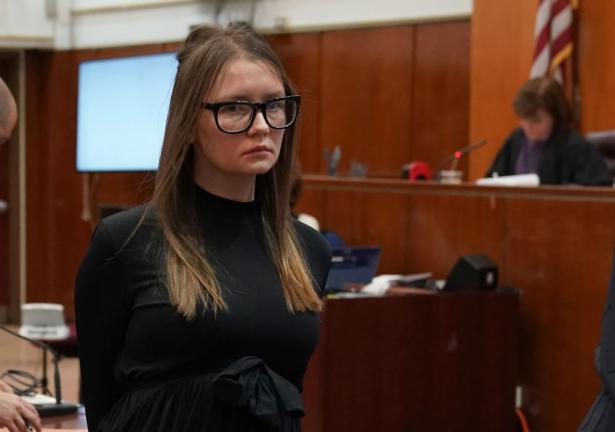 Fake German heiress Anna Sorokin is led away after being sentenced in Manhattan Supreme Court on May 9, 2019.,(TIMOTHY A. CLARY/AFP via Getty Images)

In the Netflix series Inventing Anna, just after a magazine publishes the dramatic story of Anna Sorokin’s impressive fraud, a woman walks out of a store wearing a T-shirt that says “Fake German Heiress.” Because who wouldn’t want to be a fake German heiress?

The moment captures instantly the amusement and admiration behind the public response to this real-life story. Inventing Anna, a lightly fictionalized TV series based on Jessica Pressler’s long New York magazine cover story, chronicles the rise and fall of Anna Delvey, née Anna Sorokin, a young middle-class, Russian-born woman who pretended to be a German heiress and lived large for about four years, hobnobbing with Manhattan’s rich and famous. She was even taken seriously as a client by major banks and hedge funds, including a fund called Fortress.

Inventing Anna features some of the best clothes ever seen in a TV series, better even than Sex and the City. The even bigger source of delight here, however, is Anna Delvey’s chutzpah. She steals a private jet. She uses a real heiress’s yacht without permission. She stays in some of New York’s fanciest hotels without paying.

Sorokin knew how to act rich. She had a sense of entitlement without the title. As Pressler noted in her New York magazine article, Anna Sorokin wasn’t unusually pretty, charming, or even nice. Yet people were drawn to her. Rich people liked her because she seemed to have social capital. Real finance capitalists thought they’d make money off her (and some thought they’d become even richer by marrying her). As Anna Delvey, she successfully created a moneyed vibe. She tipped lavishly in cash. Her clothes were perfect. Best of all, Delvey came close to convincing major hedge funds and banks to invest millions of dollars in her start-up, an exclusive international art space and social club (think Soho House plus art and culture, or Fotografiska without the proles). She used a voice distortion app and a burner phone to impersonate her “family banker,” an apparently fictitious German.

While the series is lightly fictionalized — a few characters are composites, some incidents made up — all the best and least believable parts are true. She really did come close to getting these big loans. She did party with Martin Shkreli, the depraved pharma bro. The Fyre Festival scammer, Billy McFarland, really was her roommate for a while.

Unfortunately, Inventing Anna focuses too much on the struggles of a boring New York City–based female journalist (sorry, my people are hardly a riveting or underexposed demographic). Normal professionals with normal problems in normal apartments just can’t compete for our interest with Delvey’s adventures in attempted financial fraud, Balenciaga, Morocco, or Ibiza. Even more misguidedly, however, the series tries on multiple boring insights. It’s tough for young women to break into finance. Everyone lies a little. Everyone’s hustling (lots of tedious moral hand-wringing about how the lawyer and the journalist are using Anna to advance their own careers, clichés about how everyone in New York is on the make). And let’s not forget the other fake bit of profundity: Who is authentic anyway in this Era of Social Media?

These contrived narratives miss the point. At one point the reporter character — Vivian Kent, based on Jessica Pressler — says Anna’s story is about “identity under capitalism or something,” which is funny, and the one moment in which the series commendably mocks its own attempted depth. But by focusing on conventional lessons and individual dramas, Inventing Anna mutes the most irresistible dimension of Delvey’s story — namely, the moral ambiguity at its heart. Who deserves wealth? No one does and yet we all do, and that’s why we love Anna Delvey.

People follow Delvey’s courtroom outfits on Instagram and wear “Fake German Heiress” T-shirts because Delvey exposed the hollow mythologies around wealth in the capitalist system. The culture industry normally peddles narratives of hard work, of massive success by little people who come from nothing. That’s just what Anna Sorokin was hoping to be. In the modern world, birth isn’t supposed to determine our access to opportunities and money, yet it certainly does. Her story is equally illuminating about our society’s attitude toward inherited wealth: we glorify the self-made and mock those with “trust funds,” but Sorokin would have had so many more opportunities had she been born into millions and millions of dollars, as she claimed. This fact reveals our culture’s fatuities about the self-made as sentimental treacle.

Under contemporary capitalism, money is supposed to be a matter of merit — this is supposed to be one of capitalism’s big advances over feudalism, yet it has never become true, because, of course, money makes money. It would be hard to argue that Delvey’s merits — creativity, ambition, knowledge of art, good taste — were less than those of the people she socialized with, or the bankers from whom she tried to get financing. Did Anna Sorokin deserve to ride a private jet or vacation on a yacht any less than an actual rich person?

Do the actual profiteers of the hedge funds she came close to fooling — like Fortress — deserve their money more than this creative, smart immigrant girl with a big dream? Of course they do not. It’s legal and socially acceptable to profit by destroying the quality of health care in this country, despoiling the planet, privatizing public services, or exploiting workers. That a young woman is in prison for telling a few untruths to men whose wealth depends on such crimes says more about the moral vacuity of capitalism than about the moral shortcomings of Anna Delvey.

How about the women of inherited wealth whose credit cards Delvey scams? One sympathizes with any human being’s feeling of betrayal by a friend, but the real heiresses don’t deserve those clothes and yachts any more than Delvey does.

Most of us feel instinctively that Delvey was right to be unintimidated by the wealthy, to tell an heiress what painting to buy, to walk into a fancy hotel and feel, I deserve all this and more.

The Anna Delvey story is intoxicating, but there’s a dark, ongoing ending. In real life and on the show, Anna went to prison on multiple fraud convictions. Shortly after serving her sentence, she was arrested by ICE for overstaying her visa, and remains in ICE detention at this writing. This state violence is only being perpetrated against Sorokin for one reason: she wasn’t quite lucky enough. If she’d succeeded in fooling the banks and hedge funds, gotten her business funded and made a success of it, no one would have cared that she wasn’t a real German heiress. The investors would have gotten even richer. She’d now be “legitimately” rich, and the rumors and questions about her real origins would remain, but only add to her mystique. She’d still be getting invites to all the parties.

Instead, Sorokin sits in jail while those financiers she defrauded go unpunished. Many of them are no doubt implicated in worse crimes, but so far they’ve had better luck.

HAVE YOU READ JACOBIN IN PRINT? SUBSCRIBE AT A SPECIAL RATE AND DON’T MISS OUR LATEST EDITION.