How Union Drives in Mexico Help All Workers

“When they do well, we do well, because our work is less likely to be outsourced to a country paying its workers a decent wage" 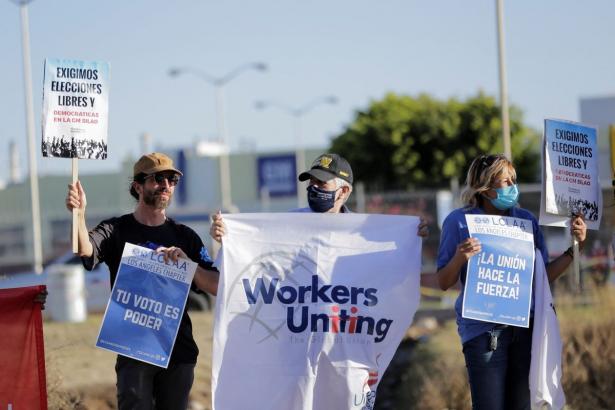 Activists hold a protest outside the General Motors’ pickup truck plant as workers vote to elect a new union under a labor reform that underpins a new trade deal with Canada and the United States, in Silao, Mexico February 1, 2022, (REUTERS/Sergio Maldonado)

What Tom O’Shei remembers most about his visit to Mexico in 2019 to support their union drives is the determination he glimpsed in the hundreds of Mexican workers who paraded through the port city of Lázaro Cárdenas for a and stopped to pray at a monument honoring a pair of murdered union activists.

Although the marchers gathered to remember the past, O’Shei knew their thoughts were also fixed on a future day when they’d win their fight for labor rights and help build a fairer economy across North America.

That day is edging closer under the 19-month-old United States-Mexico-Canada Agreement (USMCA), which American labor leaders and their allies pushed over the finish line with provisions aimed at ending the exploitation of workers in all three countries.

Thousands of workers at a General Motors plant in Silao, a few hundred miles north of Lázaro Cárdenas, voted by a landslide on February 3 to join a real union and fight for decent pay and working conditions. And long-mistreated workers at auto parts manufacturer Tridonex, just across the border from Brownsville, Texas, are scheduled to vote on February 28 on choosing their own union.

These are vital, promising steps under the USMCA, which requires Mexico to enforce the labor rights needed to lift up workers there and, in turn, level the playing field for workers north of the border.

“I’m sure it’s going to help with other facilities going forward,” explained O’Shei, president of United Steelworkers (USW) Local 135L, who looks for workers at other Mexican plants to emulate the union drives at GM and Tridonex. “They’re no different than us. They want to be able to feed their families.”

“When they do well, we do well, because our work is less likely to be outsourced to a country paying its workers a decent wage,” added O’Shei, who represents hundreds of USW members at the Sumitomo plant in Tonawanda, New York, and twice joined USW delegations that traveled to Mexico to stand in solidarity with union supporters there.

Under the USMCA’s failed predecessor, the North American Free Trade Agreement (NAFTA), employers shifted a million manufacturing jobs to Mexico to take advantage of the low wages as well as the lack of labor rights, weak safety standards and lax environmental regulation.

This race to the bottom decimated northern manufacturing communities while holding Mexican workers in poverty. Workers at the GM plant in Silao, for example, make only a few dollars an hour.

The February 2006 explosion at the Pasta de Conchos mine, which killed 65 people, underscored the safety lapses Mexican workers faced under NAFTA, as did the police killings of the two union supporters in Lázaro Cárdenas during a strike that followed the mining tragedy.

Mexican workers who tried to organize during the NAFTA era did so at the risk of their lives, and the government forced Napoleón Gómez Urrutia, the president and general secretary of Los Mineros, one of the country’s few real labor unions, into exile in Canada for more than 12 years.

“We don’t have to take a beating or see people we know die because they were fighting for representation,” observed O’Shei, marveling at the perseverance of union activists in Mexico.

The USMCA requires Mexico to give workers the right to form independent unions, elect their own leaders and vote on real contracts. The changes empower workers—like those at GM and Tridonex—to oust corrupt protection unions that conspired with employers to suppress wages and silence dissent.

Last year, for example, the fake union at the GM plant in Silao tampered with ballots during a contract vote to hold on to power. The U.S. government filed a complaint under the USMCA, and Mexican authorities ordered a revote.

Workers then rejected the rigged contract by a huge margin. That set the stage for the workers’ vote on February 3 to bring in true representation—the National Independent Union for Workers in the Automotive Industry, or SINTTIA.

The AFL-CIO and Mexican labor activists, among other groups, filed their own complaint last year after Tridonex harassed and fired hundreds of workers attempting to organize.

The company settled the allegations by agreeing to provide hundreds of thousands of dollars in back pay and setting up a hotline for workers to report labor violations, among other penalties. Finally, on February 28, workers fed up with years of abuse will have the chance to elect a legitimate union and take control of their futures.

To sustain the kind of cross-border solidarity pivotal in these cases, the USW regularly sends delegations to Lázaro Cárdenas to support union drives and the cause.

In 2019, O’Shei and the other USW representatives marched through the city shoulder to shoulder with Mexican workers, including members of Los Mineros. The American and Mexican workers exchanged T-shirts in an expression of solidarity.

And the USW delegation attended a Los Mineros union meeting and other events, such as union drives, where O’Shei met Juan Linares, a union leader, who spent years in prison for refusing to inform on fellow union supporters.

“That’s not something a lot of people would do,” O’Shei said. “He’s probably one of the most impressive people I’ve ever met. It’s invigorating to be around people who are so close to their struggle to organize, to see the enthusiasm and love they have for their union.”

Tom Conway is the international president of the United Steelworkers Union (USW).