The youngest president in the history of the Andean nation is being inaugurated today. He’s got a difficult job ahead of him. 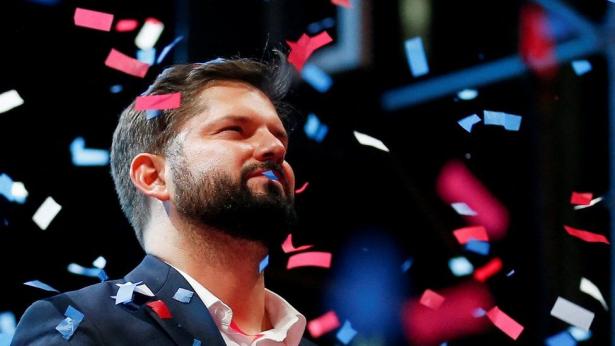 Gabriel Boric’s election as president of Chile in December was undoubtedly the most important political event to happen in Latin America in 2021.

Boric defeated José Antonio Kast, a far-Right supporter of dictator Augusto Pinochet, and ran on a platform of more social protections for the poor and higher taxes on the rich. The success or failure of Boric’s government will affect the Left’s ability to renew itself in the region. But the new administration, led by the youngest president in the country’s history (just 35), faces an enormous challenge.

Boric’s youthful, progressive, majority-women cabinet is inspired by the democratic socialism of Salvador Allende, Chile’s first ever socialist leader. His task is to oversee a profound transformation of Chilean society, burying the neoliberal economic model and building a fairer, more inclusive country. The mobilisation of social movements will be fundamental to this. In fact, Boric and the current political cycle is the result of a decade of social mobilisation in Chile.

Chile has gone from laboratory of neoliberalism to cauldron of struggles and has long been considered a development paradigm for emerging economies, because it combined economic openness with democratic stability. But Chilean neoliberalism became increasingly discredited when mass protests broke out in October 2019.

The violence and unrest sparked by a rise in metro fares in the capital, Santiago, showed the world the hidden side of the Chilean model: high levels of inequality, and lives rendered precarious by a privatised pension system as well as mostly privatised public services including water, healthcare and education. How did Chile transition from being the very embodiment of neoliberalism to this moment, when the very basis of that model is being questioned?

The mobilisation of secondary school students in 2006 and university students in 2011 provide a framework to understand this shift. In fact, Chile's new president (who won the election with more votes than any other candidate in the country’s history) started his political career in student activism.

In 2012, Boric was elected president of the University of Chile’s student federation (FECH), one of the country’s two main student unions. Two of his closest collaborators and political allies at the time were the prominent student leaders Camila Vallejo and Giorgio Jackson. Vallejo, who is now the Boric government’s spokesperson, was FECH president in 2011. Jackson – who Boric chose as his secretary general – was president of FEUC at the Catholic University, Chile’s second major student union, also in 2011. Jackson founded the Democratic Revolution party, which grew out of the 2011 protests.

All three – Boric, Vallejo and Jackson – protested vehemently against the commercialisation of education during Sebastián Piñera's first term as president (2010–14). Ten years after the ‘Chilean spring’ of 2011, Piñera will hand over the reins of power to a generation of student leaders.

Boric's rise to the highest office in the land shows the relationship between the cycle of mass mobilisation and electoral politics. The student activism of 2011 had an immediate political effect. Boric, Vallejo and Jackson became elected members of Congress, joining a student caucus in the lower house of Chile’s legislature, the Chamber of Deputies. Neoliberalism was born in Chile. Now it will die there

The call for radical change also paved the way for Michelle Bachelet's return to La Moneda, the seat of Chile’s government, as president in 2014. Bachelet, a socialist and a paediatrician, had been a political prisoner and was tortured during the Pinochet dictatorship. She ran on a reformist platform that supported gay marriage and abortion and called on supporters to “confront the inequality”. However, there was profound dissatisfaction with the slow pace of the reforms Bachelet had promised. When Piñera won the presidential election in November 2017, it was seen as an indication of the waning political influence of 2011.

In fact, student activism raised important questions about the commodification of social rights in Chile from the Pinochet years. Demanding free, high-quality education for all, Boric and the other student leaders probed the meritocratic logic that supposedly operated in Chile’s schools and universities.

Also in 2011, another popular movement was highlighting the environmental risks posed by Chilean extractivism in five heavily industrialised areas known as “sacrifice zones”. Established in the 1950s to help drive Chile’s economic development, the residents of these contaminated zones faced greater health risks than the national average. There were marches against the massive HidroAysén hydroelectric project, which proposed building five huge dams on two rivers in a beautiful part of Patagonia (the project was finally cancelled in 2017).

In 2016, thousands of Chileans also took part in the ‘No more AFP’ movement, which called for an end to pension fund administrators (AFP). Chile’s privatised pension system, in place since 1981, was seen to have failed to provide decent pensions that allowed retirees to live with dignity. Instead, they were considered a passport to poverty.

In 2018, feminist civil disobedience swept Chile. University students protested against sexual harassment and gender-based violence, under the hashtag #EducaciónNoSexista, and demanded an end to a culture of machismo. This feminist mobilisation heightened the extent to which the Chilean model of development was in question, but more than that, it politically empowered women. In 2021, when Boric and Kast were slugging it out in the second round of the presidential election, women were decisive in tipping the balance against Kast and his conservative discourse.

Finally, the Mapuche movements of the Indigenous inhabitants of south-central Chile, which emerged strongly in the 1990s, have continued to press for changes to the nation-state model, to bring greater autonomy and the restitution of their ancestral lands.

All these different strands of mass mobilisation caused pressure to build within the political system, which finally blew its gasket, somewhat like a pressure cooker, on Santiago’s streets on 18 October 2019.

The main political effect of the pressure cooker’s explosion was that it created the right conditions for constitutional change. Unlike other countries in the region, Chile had an incomplete transition to democracy after the dictatorship, and the constitution created in the Pinochet era continued to define the nation. Boric and his allies and supporters had long criticised the constitution – and Chile’s free-market model – as limiting the will of the people, privatising social rights, and favouring the rich and privileged at the expense of everyone else.

The protests of 2019, which occurred almost daily across the country, did not throw up any one clear demand, but it did become apparent that no solutions could be found without a new constitution. On 15 November 2019, Congress reached an agreement to reform the constitution, with Boric supporting the decision, despite opposition from his Convergencia Social party and activist groups’ strongly expressed reservations.

In October 2020, an overwhelming majority of Chileans voted in favour of rewriting the constitution, and for it to be drawn up by a body elected by the people rather than by 50% of Congress. This allowed the leaders of various mass movements to be represented in the assembly that is drafting the constitution.

Boric’s run for the presidency – as the official nominee of the Left and centre-Left coalition Apruebo de Dignidad – reflected the growing social consensus on the need for structural change. The presidential primaries in July last year saw him, then described as a political upstart, soundly defeat Communist party contender and Santiago-region mayor Daniel Jadue. Until then, Jadue had been leading in the polls. Unlike Boric, he took a harder line on the mass protests and possible remedies.

During the election campaign, all the candidates except for Kast sought to present themselves as change-makers. But it was Boric who managed to depict himself as the person most capable of getting the political and social buy-in necessary to bring about change. With great pragmatism, the former firebrand student leader moderated his tone and reached out to moderate voters, thereby bringing polarised Chileans together. This is part of the reason he influenced more than a million new voters, particularly young women, to vote him into office with a 12 percentage point margin.

What can activists expect?

What can activist groups expect from the Boric government? He takes office in difficult times. Congress is split between political factions, he has no majority in the Senate, the economic ill-effects of the pandemic remain, and war has been thrust upon Europe. The government will have to manage expectations accordingly. It will need the old centre-Left in order to govern, but even that will not be enough to implement key elements of the president’s programme: taxes, pensions and health reform. Though the Right is in crisis, it can be expected to dust itself off and regroup, to try to block government initiatives.

Chile’s social movements and activist groups could be the key to the success of the new government's potentially sweeping project of transformation. That said, part of Chilean society wants to move on from the 2019–20 period of mass protests. Despite having supported the protests and what they symbolised, many Chileans now want a period of constructive collaboration. It’s not possible, at this point, to predict how activist groups will behave.

The relationship between these groups and the new government will have its share of tensions. There will be disagreements over the pace and sequencing of change. Sometimes, Boric’s government will be seen as an ally; at other times, not. The government will benefit from feeling the pressure placed on it by activists, but sometimes it may jibe at the demand to go faster.

Whatever happens, both the government and social movements will depend on each other. However, for this relationship to become symbiotic, it will be necessary to build trust. The Boric government will also have to signal that progressive change will be the hallmark of this bold new era. Chile is once again a laboratory for social change.

Alexis Cortés is faculty member of the Sociology Department of the Alberto Hurtado University (Chile). He has a PhD in Sociology by the Instituto de Estudos Sociais e Políticos (IESP-UERJ, Brazil). His research interests are: urban social movements, Latin-American social theory and the performativity of social science.

Every week the Open Democracy editors gather some of the best of the week. Sign up for the Saturday newsletter.