Majority of workers who quit a job in 2021 cite low pay, no opportunities for advancement, feeling disrespected. 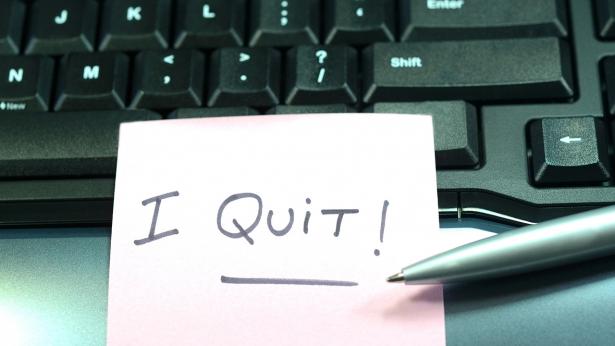 The COVID-19 pandemic set off nearly unprecedented churn in the U.S. labor market. Widespread job losses in the early months of the pandemic gave way to tight labor markets in 2021, driven in part by what’s come to be known as the Great Resignation. The nation’s “quit rate” reached a 20-year high last November.

A new Pew Research Center survey finds that low pay, a lack of opportunities for advancement and feeling disrespected at work are the top reasons why Americans quit their jobs last year. The survey also finds that those who quit and are now employed elsewhere are more likely than not to say their current job has better pay, more opportunities for advancement and more work-life balance and flexibility.

Majorities of workers who quit a job in 2021 say low pay (63%), no opportunities for advancement (63%) and feeling disrespected at work (57%) were reasons why they quit, according to the Feb. 7-13 survey. At least a third say each of these were major reasons why they left.

Roughly half say child care issues were a reason they quit a job (48% among those with a child younger than 18 in the household). A similar share point to a lack of flexibility to choose when they put in their hours (45%) or not having good benefits such as health insurance and paid time off (43%). Roughly a quarter say each of these was a major reason.

About four-in-ten adults who quit a job last year (39%) say a reason was that they were working too many hours, while three-in-ten cite working too few hours. About a third (35%) cite wanting to relocate to a different area, while relatively few (18%) cite their employer requiring a COVID-19 vaccine as a reason.

When asked separately whether their reasons for quitting a job were related to the coronavirus outbreak, 31% say they were. Those without a four-year college degree (34%) are more likely than those with a bachelor’s degree or more education (21%) to say the pandemic played a role in their decision.

For the most part, men and women offer similar reasons for having quit a job in the past year. But there are significant differences by educational attainment. 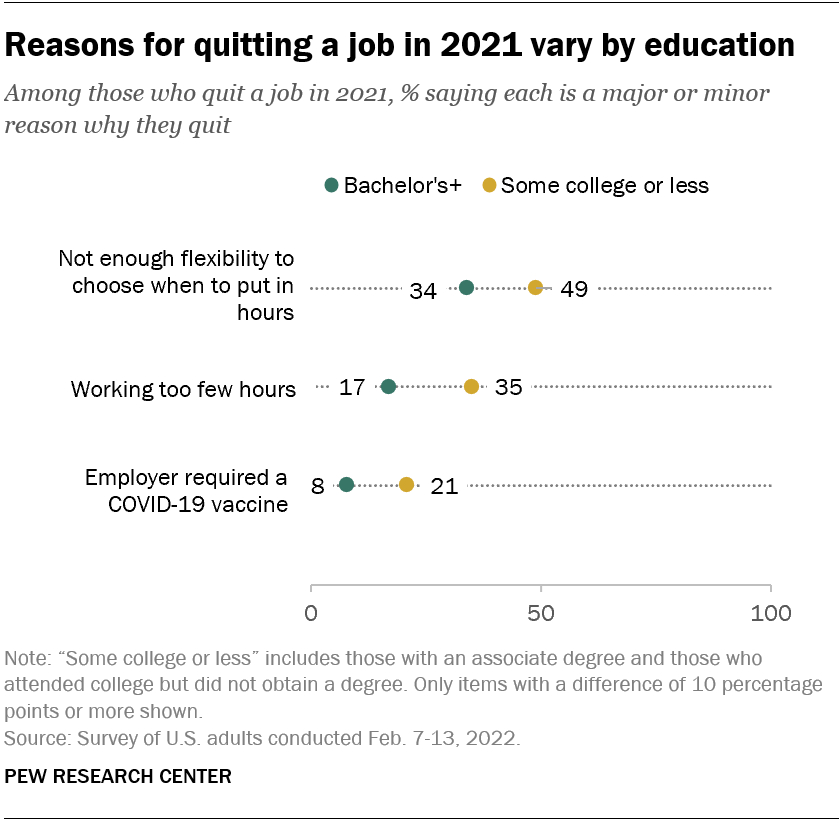 Among adults who quit a job in 2021, those without a four-year college degree are more likely than those with at least a bachelor’s degree to point to several reasons. These include not having enough flexibility to decide when they put in their hours (49% of non-college graduates vs. 34% of college graduates), having to work too few hours (35% vs. 17%) and their employer requiring a COVID-19 vaccine (21% vs. 8%).

There are also notable differences by race and ethnicity. Non-White adults who quit a job last year are more likely than their White counterparts to say the reasons include not having enough flexibility (52% vs. 38%), wanting to relocate to a different area (41% vs. 30%), working too few hours (37% vs. 24%) or their employer requiring that they have a COVID-19 vaccine (27% vs. 10%). The non-White category includes those who identify as Black, Asian, Hispanic, some other race or multiple races. These groups could not be analyzed separately due to sample size limitations.

Many of those who switched jobs see improvements

A majority of those who quit a job in 2021 and are not retired say they are now employed, either full-time (55%) or part-time (23%). Of those, 61% say it was at least somewhat easy for them to find their current job, with 33% saying it was very easy. One-in-five say it was very or somewhat difficult, and 19% say it was neither easy nor difficult.

For the most part, workers who quit a job last year and are now employed somewhere else see their current work situation as an improvement over their most recent job. At least half of these workers say that compared with their last job, they are now earning more money (56%), have more opportunities for advancement (53%), have an easier time balancing work and family responsibilities (53%) and have more flexibility to choose when they put in their work hours (50%).

Still, sizable shares say things are either worse or unchanged in these areas compared with their last job. Fewer than half of workers who quit a job last year (42%) say they now have better benefits, such as health insurance and paid time off, while a similar share (36%) says it’s about the same. About one-in-five (22%) now say their current benefits are worse than at their last job.

College graduates are more likely than those with less education to say that compared with their last job, they are now earning more (66% vs. 51%) and have more opportunities for advancement (63% vs. 49%). In turn, those with less education are more likely than college graduates to say they are earning less in their current job (27% vs. 16%) and that they have fewer opportunities for advancement (18% vs. 9%). 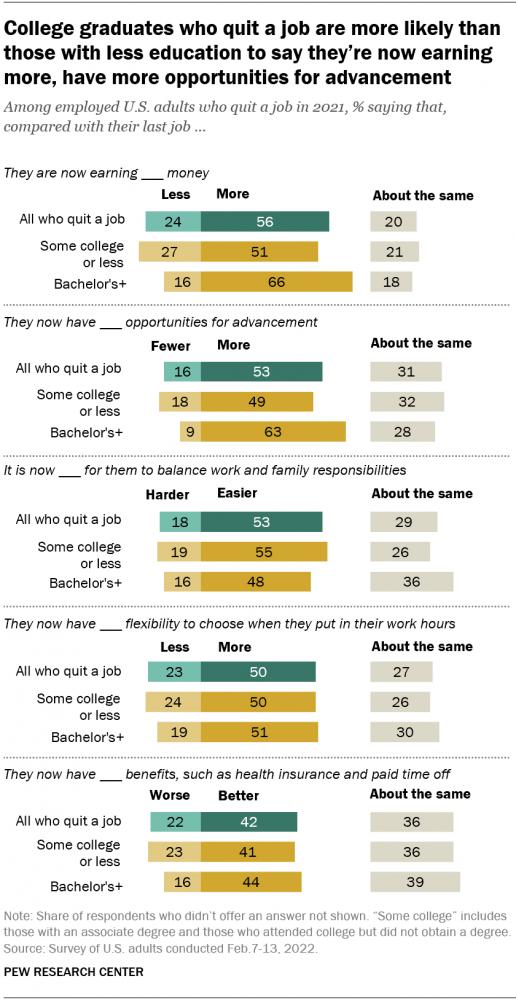 Some 53% of employed adults who quit a job in 2021 say they have changed their field of work or occupation at some point in the past year. Workers younger than age 30 and those without a postgraduate degree are especially likely to say they have made this type of change.

Overall, about one-in-five non-retired U.S. adults (19%) – including similar shares of men (18%) and women (20%) – say they quit a job at some point in 2021, meaning they left by choice and not because they were fired, laid off or because a temporary job had ended.

Experiences also vary by income, education, race and ethnicity. About a quarter of adults with lower incomes (24%) say they quit a job in 2021, compared with 18% of middle-income adults and 11% of those with upper incomes.

About a quarter of non-retired Hispanic and Asian adults (24% each) report quitting a job last year; 18% of Black adults and 17% of White adults say the same.

Note: Here are the questions used for this analysis, along with responses, and its methodology.