Oil Companies Are Making a Fortune From Soaring Prices

ConocoPhillips, Chevron, and other oil companies are paying negative taxes on huge profits. Sheldon Whitehouse, Ro Khanna, and other Democrats in Congress propose a windfall tax to change that. 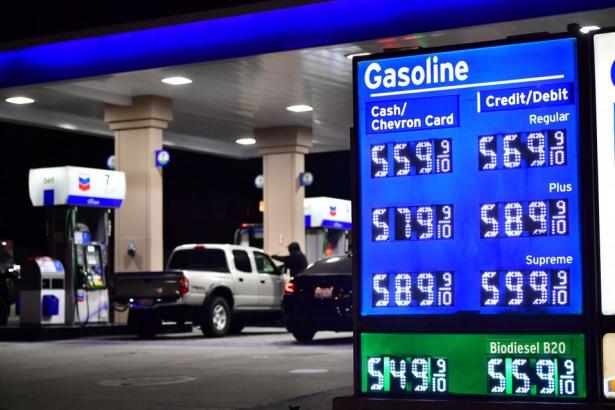 As gas prices climbed to over $4 per gallon in the United States and oil traded at highs of $130 per barrel this week amid war in Europe, a new report from the U.K.-based think tank Common Wealth finds that the top five oil and gas producers in the U.S. are getting a wildly good deal from the U.S. government: While they rake in massive profits, their tax burden remains shockingly low. Since the Paris Agreement was signed, top producers have, on average, gotten money back from the IRS. Thursday afternoon, a group of congressional Democrats—led by Rhode Island Senator Sheldon Whitehouse in the Senate, and Representative Ro Khanna in the House—announced a bill to help change that, proposing to levy a tax on fossil fuel companies’ windfall profits.

“Big Oil is raking in record profits while working families are struggling to afford gas at the pump. What we are seeing right now is a prime example of corporate greed and companies profiting off an international crisis,” Khanna said over email. The bill, he added, is aimed at putting “a stop to this corporate profiteering by raising revenue off the windfall profits of these companies and returning the money directly to working Americans.”

The new Common Wealth report backs this up. Analyzing data from financial databases Bloomberg Terminal, Compustat, and Thomson Reuters Eikon, researchers Sandy Hagar and Joseph Baines found that according to Compustat and corporate 10-K filings required by the Securities and Exchange Commission, ConocoPhillips, Chevron, ExxonMobil, Hess Corporation, and Devon Energy altogether got $1.95 billion back in domestic taxes between 2015 and 2022. The same companies paid $77.2 billion to foreign governments over the same period.

While paying negative taxes to the U.S. government, these companies also delivered their investors $201.4 billion in dividends and share buybacks, or $40.3 billion on average—well above the $15.3 billion average for companies listed on the S&P 500. This year, pretax profits for ConocoPhillips, Chevron, ExxonMobil, Hess Corporation, and Devon Energy are expected to increase by 42.7, 38.5, 28.6, 56.9 and 44.6 percent respectively, as compared to last year.

“You see quite clearly that the energy crisis has been a windfall for big companies,” Hagar told me. “I always thought they had a favorable domestic tax agreement, but the data floored me.… What makes it jarring is that so many people are suffering from rising energy prices.”

Representatives from ConocoPhillips and Devon Energy did not respond to a request for comment for this story. Hess declined to comment. Erin McGrath, ExxonMobil’s senior adviser for public and government affairs, called an earlier, prepublication set of tax figures cited by Common Wealth “incorrect,” pointing to the company’s 10-K filings. Baines then cross-referenced Compustat’s data with each company’s corporate 10-K filings to produce the final figures in the report. When asked to provide correct figures for ExxonMobil’s tax payments in these years, McGrath stopped responding.

As consumers’ costs skyrocket at the pump and for home heating bills—in Europe, especially—the European Union and United Kingdom have both explored taxing energy companies’ windfall profits to fund renewable energy investments and to help people afford daily life. To date, the higher-profile legislative energy push in the U.S. has been a bipartisan group of lawmakers successfully pressuring the White House for a ban on Russian oil imports, announced by the administration on Tuesday.

American oil and gas companies also seem eager to capitalize on a stoppage of energy flows from Russia to secure lucrative new long-term gas contracts and infrastructure in Europe—a market that was previously looking bleak amid rising concern about the climate crisis. The American Petroleum Institute (an oil and gas lobby group) has argued that the administration—which is actively encouraging more production at home and abroad—is imposing artificial limits on production that are keeping prices high in the U.S. and threatening Europe’s energy security. Turmoil there, API argues, should be cause for agreeing to several of its long-standing demands to peel back regulations and green-light new infrastructure.

Democratic Michigan Congresswoman Elise Slotkin has introduced the American Energy for Europe Act. The bill would direct the Department of Energy to spend $500 million on (among other measures) issuing “grants, loans, or loan guarantees to carry out projects that can reduce an allied European country’s reliance on natural gas, petroleum, or nuclear fuel produced in Russia.” Though the bill doesn’t specify particular investments and could fund renewables—it vests decision-making authority with the DOE—some of that money could flow to oil and gas producers. Centrist pundits, including Fareed Zakaria, have said the White House should “help more with the financing of liquefied natural gas, so that it can be sent to Europe.”

One problem with this approach is that the oil and gas sector already receives extraordinarily generous subsidies, estimated at around $20 billion per year. So far those subsidies haven’t produced energy independence in either Europe or the U.S., given oil is a fundamentally global commodity over which the U.S. has limited control. Those subsidies have, however, helped produce huge profits for oil and gas companies.

There’s a basic mismatch between what producers can or are willing to do and the expectation that U.S. oil and liquefied natural gas will deliver either energy security to Europe or lower prices at home. Infrastructure to deliver U.S. liquified natural gas to Europe remains limited, and would take years to come online. U.S. oil is being produced at or near capacity, and expects steady but by no means explosive growth in the short-term. And the U.S. has very few tools to ramp up production even if there was more room to do so.

In a press briefing held in advance of CERAWeek, which kicked off Monday morning in Houston, a senior Department of Energy official said the administration was eager to see more production but that ultimately “these are private sector decisions. We would think and hope that $155 dollars per barrel is an incentive,” the official said. “We need to have transparent, well-functioning markets. The price incentive is there. These companies are making record profits.”

Major U.S. drillers, meanwhile, don’t seem eager to increase production: High prices generally translate to high profits, and shale drillers trying to get back in investors’ good graces after years of hemorrhaging cash are looking toward longer-term stability on their balance sheets. Pioneer Natural Resources chief Scott Sheffield poured some cool water on the notion that a dramatic uptick in production was in the offing, telling the Financial Times last week that any growth plans were on a two- to three-year timeline and that it would take “six to eight months to get first production.” He suggested recently that $200 per barrel prices wouldn’t change their mind, either.

Shale drillers especially have pointed to Wall Street’s demands for heftier dividends, share buybacks, and measured growth plans as a key reason they can’t increase production. They’ve also suggested, bizarrely and without much evidence, that the financial sector is crawling with woke climate activists. “We shouldn’t have politicians and bankers telling us we don’t need oil and gas five years from now,” Hess CEO John B. Hess told the crowd at S&P Global’s CERAWeek 2022 on Monday. “We’re started to see the ruptures in the economic system because we’re not investing enough.” But the likes of ExxonMobil and Chevron—whose big balance sheets mean they’re under far less pressure to maintain low-growth “discipline,” as executives put it—have delivered extraordinary sums to their shareholders, too.

Profits are expected to continue ballooning in 2022. Asked about the prospect of a windfall tax in the U.K., BP CEO Bernard Looney argued to the Financial Times that additional taxes would threaten their investments in low-carbon energy. For U.S.-based oil companies that may be a harder case to make: ExxonMobil and Chevron devoted just 0.16 percent and 2 percent, respectively, of their total capital expenditures to low-carbon energy in 2021, Hagar and Baines found. McGrath said that Exxon “has committed $15 billion for lower-emission investments through 2027,” adding that their “plans are flexible, and we’ll continue to optimize our developments as the policy environment and technology continue to evolve.” In response to a request for comment on this story, a Chevron spokesperson emailed a link to a press release from last September announcing that the company planned to triple its capital spending on “lower carbon ambitions” by 2028. All else being equal, this would, in theory, bring their low-carbon spending to 6 percent of total capital expenditures.