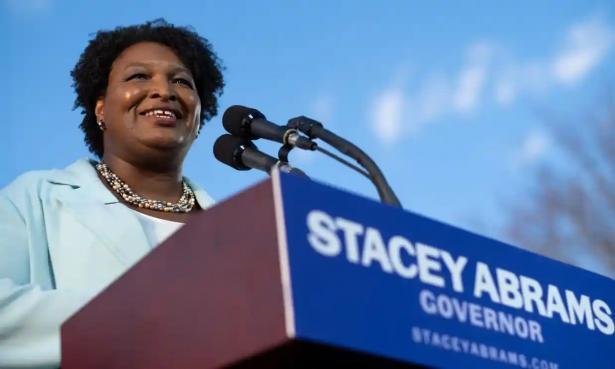 The Georgia gubernatorial candidate and voting rights campaigner Stacey Abrams has been made president – of United Earth.

The honour, which a leading conservative website said Abrams did not deserve, was bestowed by the Paramount+ TV series Star Trek: Discovery, in its season four finale.

Abrams is a self-confessed Star Trek superfan. In 2019, she told the New York Times she binged on episodes during her last run for governor.

“I love Voyager and I love Discovery and of course I respect the original,” she said, “but I revere The Next Generation.”

“When the time came to start talking about the president of Earth,” she said, “it seemed like, ‘Well, who better to represent that than her?”

Abrams is a former Democratic member of the Georgia state house as well as a prolific romance novelist. She has said she will be US president by 2040.

In 2018, she ran the Republican Brian Kemp close for governor of Georgia. She is seeking a rematch this year and in part thanks to her work on voting rights has risen to prominence in the national party, having been considered for vice-president to Joe Biden.

Abrams’s work helped secure both Biden’s win in Georgia in 2020 and Democratic control of the US Senate, via two Georgia run-offs.

Such work has made her a target of the right. On Friday, the National Review, a conservative site, published a column about her Star Trek cameo: Stacey Abrams Does Not Deserve to Be President of Earth.

Abrams, the Review said, “is, at this time, most famous for losing the 2018 Georgia gubernatorial election and then proceeding to deny she had lost it”.

Abrams refused to concede to Kemp, who as Georgia secretary of state oversaw the purging of voter rolls before the election he contested.

Brad Raffensperger, the current Georgia secretary of state, has argued that Abrams’ refusal to concede was “morally indistinguishable from – and helped set the stage for – former president Donald Trump’s behavior after the 2020 presidential election”.

Raffensperger famously stood up to Trump, whose request that Raffensperger “find” sufficient votes to flip the state is at the heart of a grand jury investigation.

In 2019, Abrams told the New York Times that while she “legally acknowledge[d] that Brian Kemp secured a sufficient number of votes under our existing system to become the governor of Georgia. I do not concede that the process was proper, nor do I condone that process.”

She also said: “I have no empirical evidence that I would have achieved a higher number of votes. However, I have sufficient and I think legally sufficient doubt about the process to say that it was not a fair election.”

The Review complained that Star Trek would never make Trump president of Earth, not even “in the way that the evil genetic superman Khan Noonien Singh once despotically ruled one-quarter of earth’s population”.

It added: “In classic Trek fashion, Abrams [was] shown as the logical and inevitable result of the kind of technocratic progressivism that the show has long advanced, a fruition of our highest ideals. Her behavior in the political sphere does not seem to bear this out.”

Elie Mystal, a writer for the Nation, responded: “Look at how conservative white people react to a FICTIONAL black woman president.”

Mystal also tied the Review’s criticism to events in Washington, where Ketanji Brown Jackson will next week begin confirmation hearings to be the first Black woman on the supreme court.

“Next week,” Mystal wrote, “this same publication that can’t handle a black women president ON A TELEVISION SHOW is going to claim to have reasonable and *totally not racist* thoughts about a real life black woman on the supreme court.”

The makers of Star Trek: Discovery seemed happy just to have had Abrams on set. They also explained how they fulfilled her request not to be told of the plot of her episode, so she could enjoy it later.

As the Washington Post reported, the episode, which was filmed in Toronto last August, ended with Abrams “telling the show’s protagonist … ‘There’s a lot of work to do. Are you ready for that?’

“It really signaled the culmination of the season having her there,” she said, “because she’s such this symbol of hope and strength and connection and sacrifice and building something bigger than yourself that will last generations, and that’s exactly what we’re talking about doing in the story.”

In a “cherished moment”, Martin-Green said, Abrams was presented with a trophy, a captain’s badge and a poem.

… we have a small favour to ask. Tens of millions have placed their trust in the Guardian’s fearless journalism since we started publishing 200 years ago, turning to us in moments of crisis, uncertainty, solidarity and hope. More than 1.5 million supporters, from 180 countries, now power us financially – keeping us open to all, and fiercely independent.