Jamaica in the 18th century was described by Charles Leslie as a “constant mine, whence Britain draws prodigious riches.” More Africans arrived in Kingston to become plantation slaves than arrived in any other place in the British empire.

March 27, 2022 Trevor Burnard The Guardian
Printer friendly
Protests During the Duke and Duchess of Cambridge’s Visit to the Caribbean Highlight Royalty’s Pivotal Role in the Slave Trade Published March 27, 2022 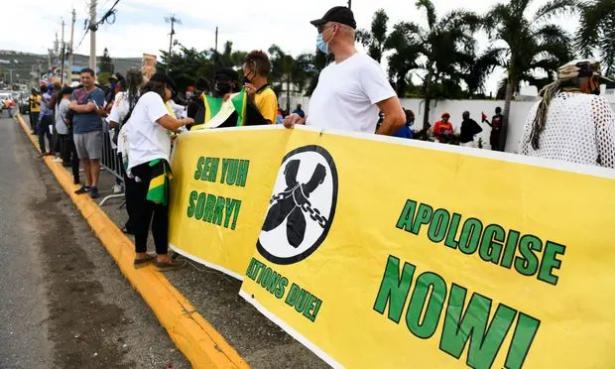 Protesters in Jamaica want the royal family to apologise for its role in institutionalising slavery on the island., Ricardo Makyn/AFP/Getty Images

It wasn’t supposed to go like this. Usually, royal tours are full of cheering people lining the streets and gushy accounts of glamorous dresses. There has been some of that during the royal visit by the Duke and Duchess of Cambridge to the Caribbean. But there also have been protests, especially in Jamaica, where many people want the royal family to apologise for its role in institutionalising slavery on the island. To top it all off, it has also been reported this week that Jamaica has begun the process of removing the Queen as the head of state

Such a reckoning with Britain and its state is long overdue. Jamaica in the 18th century was described by Charles Leslie as a “constant mine, whence Britain draws prodigious riches”. It contributed greatly to the wealth of individuals thousands of miles away, such as William Beckford, Lord Mayor of London and the owner of well over 1,000 enslaved people, whose statue still graces Guildhall in London. But more significantly, it enriched Britain by filling the coffers of the Treasury with money from taxes levied on sugar and rum. Britain was the greatest slave trader in the Atlantic world during the 18th century, sending nearly 1 million captive Africans to Jamaica between 1655 and 1807, resulting in a population of enslaved people barely over 300,000, due to horrific mortality rates. Black people suffered greatly for white people’s enjoyment of sweet things

Kingston, where the Duke and Duchess of Cambridge visited, is the Ellis Island of forced migration to places that were colonised by the British in the 17th and 18th centuries. More Africans arrived in Kingston to become plantation slaves than arrived in any other place in the British empire. The visiting royals might have acknowledged this fact by visiting the foreshore and noting the trauma for Jamaicans, most of whom are descendants of those people arriving from Africa some centuries back, rather than kicking a football around and playing bongos in Trench Town.

If they had done so they might realise why many Jamaicans are so angry at their visit. The royal family has a long and undistinguished history in regard to Jamaican slavery. In the 17th century Charles II granted a charter to the Royal African Company and his brother, James II, would later become its governor. Under royal blessing, the company became the largest single slave trader in British history, bringing perhaps 100,000 captive Africans to the Americas before 1713. George II was a prominent supporter of the slave trade and plantations. George III as a young man is said to have expressed antislavery sentiments before he became king, but he did little to stop the slave trade or slavery during his long reign.

Some royals, such as the Duke of Gloucester, supported William Wilberforce in his campaign against slavery. But most of the royal family – George III and his many sons – supported slavery and West Indian planters, with seven royal dukes in favour of slavery against one against during debates on abolishing the slave trade heard in the House of Lords. Indeed, William, the Duke of Clarence (later William IV), was a leader of the pro-slavery lobby, being given a gift of expensive silver dinner ware (still in the royal family’s possession), by the Jamaican assembly for his efforts against closing down the slave trade. Consequently, we can understand why many Jamaicans who are descendants of enslaved Africans feel the royal family have to answer for their past behaviour and attitudes. As far as I’m concerned, they need to do more than just apologise on behalf of Britain; they might acknowledge their own responsibility – moral and even financial – as a family enmeshed in multiple ways in supporting slavery. Prince William rightly condemned slavery in a speech at a state dinner on Wednesday evening as “an appalling atrocity” that “forever stains our history”. But he did not take the necessary next step and note that it is more than just something bad that Britain did. It is an atrocity for which the royal family itself has a degree of personal responsibility.

Of course, we could argue that Britain has acknowledged its liabilities as a slave-holding nation by the fact that it paid what was then the enormous sum of £20m pounds in 1834 as compensation for slavery. Some of that money ended up being invested in developing Jamaican infrastructure, such as banks, insurance agencies and railways. The problem is that it all went to slaveholders, those people who had kept Black Jamaicans in misery.

Britain gave money to slaveholders as a means of ensuring the abolition of slavery would occur. It was very worried that without such compensation, white planters would refuse to give up their enslaved property, which would lead to the island and its plantation colony being destroyed in ways that Britons had seen happening a generation before, in Haiti. The British government gave nothing to the enslaved people who produced the wealth for which Jamaica used to be famous. Now, Jamaica is a poor country. It would be a good thing if Britain recognised its historical responsibility for creating those conditions of poverty, while benefiting from Jamaican wealth. It might start with the royal family recognising its role in supporting this terrible institution.

Lend The Guardian a hand in 2022. More than 1.5 million people in 180 countries now fund our fearless, independent journalism. Will you lend us a hand? This vital support means we can remain independent of shareholders or a billionaire owner, free to report relentlessly on world events. It means we can keep Guardian reporting open for everyone. Every contribution, however big or small, powers our future. Support the Guardian from as little as $1. Thank you.