In WeCrashed, it isn’t just that the Neumanns were so charismatic or that people looked the other way. People wanted to believe in changing the world. 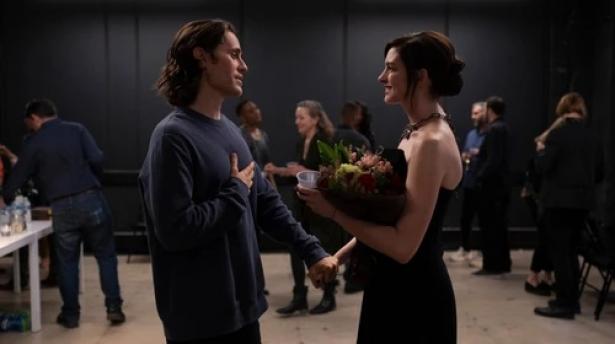 n the first few minutes of WeCrashed, Apple TV’s new show about WeWork based on the podcast of the same name, Adam and Rebekah Neumann, played by Jared Leto and Anne Hathaway, walk triumphantly through their office to “Roar” by Katy Perry only to learn that Adam has been fired by the board. The Neumanns’ meteoric rise and catastrophic fall could only have happened in a world where that song was a chart-topping single.

It’s a perfect fit for the two of them. “Roar” as a song is psychotically happy, but absolutely devoid of meaning. Perry unartfully belts out that she has the eye of a tiger, and that she’s a fighter, but it sounds like she’s trying to convince herself as much as she is proclaiming her own greatness.  In WeCrashed, Leto’s Adam Neumann takes to it instantly, and it immediately becomes a symbol of his relationship with Rebekah—eventually, an orchestral rearrangement becomes their leitmotif.

Ultimately, WeCrashed is a show about the inevitability of the Neumanns’ brief phenomenon in the world of business, and how their very literal marriage of Gwyneth Paltrow-style wellness rhetoric and the unfettered capitalism of the startup world came to define how millennials relate to labor. When Adam and Rebekah meet, she calls him out as a huckster trying to get out of paying for an expensive dinner on a date by only ordering appetizers. In contrast to him, she seems like she's figured out life: She’s a yoga instructor, a former actress and cousin to the actual Gwyneth Paltrow, and says repeatedly that she believes that negative emotions are a choice. Hathaway plays Rebekah with a sick glee; one of the series' funnier moments is when Rebekah shows up way overdressed for a Halloween charity gala and then spends several scenes dressed as a Na'vi from Avatar, blue paint and all.

What attracts her to Adam, eventually, is his willingness to put her first in everything. When he learns that she doesn’t get to keep her tips as a yoga instructor, he marches into the head office to tell her boss to pay her what she’s worth. Their love is portrayed as genuine, if not actually quite sweet. It’s just that they become so consumed with their own desires—to make a lot of money and, in a vague sense, make the world a better place—that they don’t even notice as the company they build together starts to fall apart.

Although Adam was the CEO and most visible part of WeWork, WeCrashed does not shy away from showing how vital Rebekah’s views on wellness culture were to WeWork’s central philosophy. An early episode sees a very stoned Rebekah and Adam synthesizing the concept of WeWork—a high-end co-working space targeting millennial entrepreneurs, that also serves as a social space with happy hours, bean bags, and ping pong—before trying to get someone to invest in their company that technically doesn’t exist yet. Rebekah describes the process of manifesting to Adam—putting a thought into the universe until it becomes true. This is how the couple arrives at the valuation for their idea: 45 million dollars.

But what else is a valuation than thinking about a number until it becomes true? Throughout the show the Neumanns' approach to “elevating the world’s consciousness,” which is the company’s mission as dictated by Rebekah, is to just say things until they become true, often at the expense of everyone except the Neumanns. Adam’s initial idea for WeWork was inspired by his time growing up in a kibbutz in Israel. In the first episode, he pitches a business class he’s taking on that idea, saying that even if it sounds like living in a dorm, once they graduate, they’ll always try to recreate the communal spirit of college. Rebekah struggles to figure out her role at the company, but eventually starts a school, WeGrow, as an extension of that communal philosophy, even though she can’t really explain why a coworking company needs to have a school.

In an episode centered on Summer Camp, the infamous workplace-retreat-as-debauched-music-festival that the company put on every year, the company’s small inner circle of lawyers end up chastising Rebekah for saying something that comes off as sexist about her role as Adam’s supporter in the company. The issue is that it might alienate the millennials at the company.

“We can’t lose the millennials,” a lawyer says. “They’re the only people willing to work 80 hours a week for free beer and t-shirts.”

Hearing that line immediately made my heart skip a beat—I was a millennial who once worked long, long hours because of the promise of free food and alcohol. I did it because the company I worked for made me feel like I was a part of something, that I was doing something I could really believe in. Why not, then, throw my body onto a pyre, so that this company could keep going?

WeCrashed makes the case that it isn’t just that the Neumanns were so charismatic or that their valuation was so staggering that people just looked the other way when it came to the shakiness of their actual business; people wanted to believe in them. Over and over again, WeCrashed shows how the Neumanns sold an idea to people, a mission they could believe in, and how it left every single person they worked with worse for wear. Of particular note is America Ferrera, who plays a fictional entrepreneur who joins WeWork as a true believer. Unable to handle being upstaged in any way, Hathaway’s Rebekah Neumann systematically sabotages her only friend’s career until she has completely taken over her job and gotten her fired from the company.

“Roar” is really the only song to soundtrack a story of a love so deranged it ruined the lives of everyone in its wake. It’s a song all about believing in yourself, for no other reason than that you should believe in yourself. A psychotically happy, utterly meaningless series of cliches that, if you’re not paying too much attention to it, you could mistake for genuine happiness.