The Wheels of the Trucks (Still) Go Round and Round: Send in the Whining, Racist, Clueless Clowns

The coolest rejoinder to the manly, cacophony of trucks barreling down a D.C. street, horns blaring, was one lone chill biker, languidly pedaling in front of them: "#BikeMan slowing down the forces of #DumbTruckIstan." Not all heroes wear capes.

March 28, 2022 Abby Zimet Common Dreams
Printer friendly
The Wheels of the Trucks (Still) Go Round and Round: Send in the Whining, Racist, Clueless Clowns Published March 28, 2022 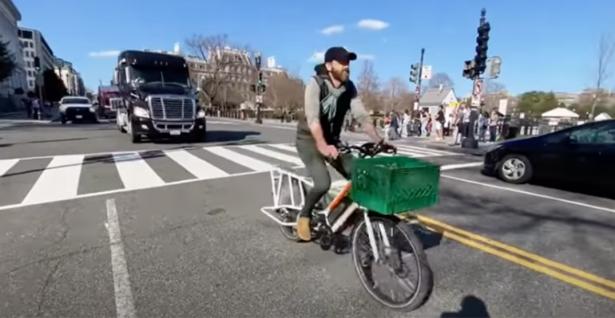 Despite a flood of fake news about some slight disturbance in some backwater place called Ukraine, it turns out the true fight for liberty has been unfurling for weeks in our own, troubled, mask-enslaved country, where a noble Freedom Convoy of truckers - at one time touted to draw up to 100,000, but currently topped out at about 100 diesel-guzzling souls stubbornly impervious to reality - has come to save us. The story behind the convoy is long and winding. We told it a while ago in a lengthy post our computer then devoured in one malignant gulp, so we're not dredging up the links again; here's two to prove we're not making it up.) In brief: In thrall to the Flu Trucks Klan hordes who invaded Canada this winter, two truck convoys set out from California on Feb. 23 for Washington D.C., or possibly not really into D.C. but somewhere around there, unless a select few decided to actually go into D.C., but they weren't sure.

Their initial goal was to disrupt Biden's State of the Union speech - yes it was that long ago - and occupy D.C. (or not) to protest evil, life-saving COVID restrictions like vaccine mandates behind lofty if QAnon-flavored slogans like "Let's Go Brandon" "Rise Up!" "Blinded by the Mask" "Jesus Saves" and other stuff for freedumb. Also to whine about other things in guvment, like CRT and socialism, they might not like though they're not sure what they are, but still. Unfortunately, by the time they left, mandates were largely a thing of the past. Also, unfortunately, the next day, a bloodthirsty madman invaded Ukraine, which swiftly garnered the attention of a famously fickle media, as, in this case, it should have.

Nonetheless, they bravely set out. Again briefly: The first "People's Convoy" had about 200 vehicles - a half-dozen 18-wheelers with the rest a smattering of pick-ups and SUVs; by the time they got to Las Vegas they had 5 vehicles and disbanded, urging fellow travelers to join one of the other purported convoys setting forth. The same thing happened to a second "Freedom Convoy." But several other fleets did startup - from the mid-West to the Northeast - lumbering along as local media dutifully reported on their progress, the handfuls of flag-waving patriots on overpasses, the times they got lost, ran out of gas, crashed into some pick-ups in Oklahoma and the guy in Scranton who promised to "choke D.C." but when nobody else showed doggedly drove his Jesus-bedecked 18-wheeler in circles around the mall. (Again, look it up.) They remained enthused; a woman eating grilled elk at a campfire in Arizona happily proclaimed, "This is freedom!" (Ditto. We spent a lot of time on that post.) Ultimately, they came together at Maryland's Hagerstown Speedway, a good hour-and-a-half drive from D.C. There they built an encampment, held meetings to make garbled speeches about how Russia and Ukraine were just a distraction from them, and tried to figure out what to do next, given it was a week past SOTU and the end of most mandates. Reports on their numbers varied, but probably peaked at about 1,000.

They've now been camped at the Speedway for almost two weeks, griping and plotting amidst their rigs, tents, flags, campfires, imaginary grievances, JFK Jr. fantasies and banners proclaiming "Trump 2024," "Free the People" and "Jesus Is the Way." But to what? Their rhetoric echoes last month's deranged CPAC 2022, where "Trump was right about everything," masks cause drug abuse and all we need is "Jesus Guns Babies," and no trans kids. In a godless society, said one, "Unless you’re ready to, I guess, kill us all, you better change your minds because we’re not going to live as slaves.” One lady's biggest concern: "I don't want 'em to digital us...make us robots." All told, their eloquent, inchoate goal: "We're going to plug this fucking highway up completely... We're going to fuck some shit up. If (the government) don't do what we say, it's gonna happen." By the time they finally started circling D.C. on its 64-mile, famously packed Beltway over a week ago, they were psyched. Organizers at first announced they'd do one loop a day, then "escalated" to two. The truckers eagerly joined the fray, blaring airhorns, flying flags, further snarling traffic and often getting separated in what became an ever more inane exercise in loud futility. Also pricey. With soaring gas prices, diesel has hit almost 5 bucks a pop - or up to $1,400 to fill one of these big boys' tanks, a tab dark-money, right-wing groups are reportedly picking up.

Unsurprisingly except to pointlessly circling yahoos, harried D.C. drivers were less than happy to see, hear and smell them, which is why so many have taken to flipping them off as they drive by. "Birds are flying everywhere," whined one driver. It got worse when, after a week or so of circling,they got bored and started lurching into D.C. proper, further jamming roads, also sight-seeing. Residents have dubbed them "a fever dream on wheels," "a lynch mob with bad gas mileage," "Fox News’ immigrant caravans, but with white people and actually dangerous.

Day by day they've added hashtags:  #ConvoyGoHome, #DCMeansDontCome, #FreeDumbConvoyOut, #Clownvoy 2022. "U woke up today and no one was bombing your house or hospitals, but u complain you have to wear a mask at wal-mart?" sneered one. Also, "Why the fuck are they still downtown?" and, "Why the fuck are they still?" Things that haven't helped their popularity ratings: The paranoid idiocy that makes them think every middle finger belongs to Antifa - On C.B. radio: "Six Antifa vehicles! Six Antifa vehicles! Keep your heads on a swivel!"; their efforts to clog 911 lines in petty response, despite broad consensus said fingers don't constitute an emergency; their growing belligerence, from punching a commuter's window to boxing in a Tesla driver to not letting a distraught driver late for a doctor's appointment get through until she swore she wasn't going for an abortion, which is definitely their business. WTF.

Because they're white/ not asking for racial equity, they've found a few icky friends in high places. After killing off their pensions, Ted Cruz played trucker with them - beamed one, “There ain’t no ignoring a senator riding in the lead truck”; Gym Jordan said, "God bless you" when they moaned about the 1st Amendment rights of "a very massive movement"; a GOP senator gave some a tour of the Capitol, leading one worried staffer to notify the FBI. But mostly, they kept getting more hurt and enraged 'cause nobody liked them - press, locals, even police, who put up roadblocks to bar them from the city. After the National Park Service rejected an insane permit request to turn the National Mall into a two-week-long encampment - organizer Brian Brase said 100,000 fans would come, or maybe 17, and he feared Antifa disruptions - things got still uglier. "We're not going to (go) throat-punch them just yet, even though I know we would all love to do that,” said organizer Mike Landis; he added to “tear the fence down at the White House and hang politicians” was “extremely enticing,” but that "isn’t why we are here.” And that is...? As the hapless days went by, there's been vague mission creep as they struggle, like the rest of us, to find a reason to be. Without mandates, they've railed at media, police, Biden/Harris - "When they're gone, we'll be happy. We'll go home" - finally ending, like stubborn existential toddlers, with, "We still here, and we ain't going anywhere."

After a month on the road, the incoherent procession of truckers, crackpots, crybabies, small dogs, big mouths and old guys in Uncle Sam costumes last week attained a kind of Beckett-like clarity, a sharp pinnacle of aggrieved farce and ugly tragedy when it finally morphed into...a lynch mob crusading against black people. At the Speedway's morning meeting, a motorcyclist stood onstage and announced, "Everybody needs to get to D.C. now.” Then he outlined his idea for the new day upon them. “What’s going to happen up there in D.C., Black Lives Matter street, we’re going to take it back!” he declared. “All that paint’s coming off that street. Before I get put in my grave it’s gonna get tar and feathered.” Wan cheers from the small crowd. Ominous pause. "And then we’re going to tar and feather all our delegates.” Confused pall: Wait, can we do that? No, not without elevating a vandalizing of public property to a federal hate crime. But then the point of the MAGA hysteria would be clear, and it's definitely not racist to deface a Black Lives Matter Plaza of 50-foot letters dedicated to the proposition that all people are created equal. Right? Ummm...The coolest, quietest, trollingest rejoinder to this atrocity came Saturday as another massive, manly, cacophony of trucks barreling down a D.C. street, horns blaring, was stopped in its petulant tracks by one lone chill biker, languidly pedaling in front of them: "#BikeMan slowing down the forces of #DumbTruckIstan." Even better: When a guy in a car pulled alongside the biker to yell, "Hey, you've got a bunch of trucks behind you." "What's that?" the blithe biker called back. "Sorry, I can't hear you. It's too loud." Not all heroes wear capes.

Abby Zimet has written CD's Further column since 2008. A longtime, award-winning journalist, she moved to the Maine woods in the early 70s, where she spent a dozen years building a house, hauling water and writing before moving to Portland. Having come of political age during the Vietnam War, she has long been involved in women's, labor, anti-war, social justice and refugee rights issues. Email: azimet18@gmail.com

Common Dreams is a reader-supported independent news outlet created in 1997 as a new media model.  Our nonprofit newsroom covers the most important news stories of the moment. Common Dreams free online journalism keeps our millions of readers well-informed, inspired, and engaged.  We are optimists. We believe real change is possible. But only if enough well-informed, well-intentioned—and just plain fed up and fired-up—people demand it. We believe that together we can attain our common dreams.

We are independent, non-profit, advertising-free and 100% reader supported.  DONATE