Trump’s Missing Phone Records Have a Familiar Stink of Criminality

Seven hours and 37 minutes: That’s the length of the gap in the official White House records of phone calls placed to or from Donald Trump’s phone during the Jan. 6, 2021, riot at the Capitol. Three hours more than the Grateful Dead’s longest concert 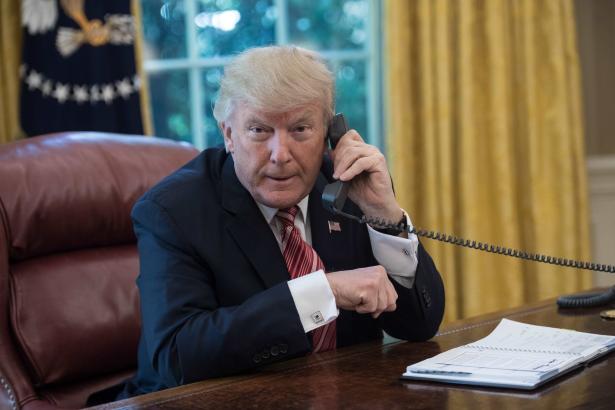 Longer by an hour than a flight from New York City to Seattle. It’s only 30 minutes shorter than the longest baseball game played in the modern era—though that game was played over the course of two days. More to the point, it’s more than 20 times longer than the gap in the Watergate tapes that caused a scandal for President Richard Nixon, ultimately leading to his resignation in 1974.

That gaping hole in the official record raises serious questions about what Trump was up to as rioters breached the U.S. Capitol, including whether he and his allies coordinated with some in an effort to prevent lawmakers from certifying the election. The then-president was almost certainly on the phone during this period: Phone records turned over to the January 6 committee show several calls made before and after that lengthy gap, which runs from around 11 a.m. to 7 p.m., when rioters finally were cleared out of the Capitol.

That silence gets at the heart of the one big mystery that remains about the January 6 riots: What was Donald Trump doing as rioters stormed the Capitol? Trump’s ultimate goal—overturning a legitimate and lawful election—has never been in doubt. But his exact actions on January 6 remain clouded. We know he called lawmakers—today, a spokesperson for Mitch McConnell confirmed that Trump called the then–Senate majority leader but that he didn’t pick up—and that he refused to condemn the riot for several hours.

For Democrats, the gap is also an opportunity to return the focus onto Trump’s own role in the attempted coup, as well as the Republican Party’s extensive efforts to protect him from facing accountability. For months, even amid a series of damaging revelations, most of the attention has focused on Trump’s efforts to prevent congressional investigators from accessing records relating to his activities on January 6. Slowly but with increasing surety, Trump has become a larger focus of the January 6 committee’s efforts. The way this lengthy gap in the official record recalls the Watergate scandal is advantageous to those seeking accountability: It provides an accessible and familiar reference point both to make their case and to underscore its seriousness in ways that people who haven’t been following the story closely might more easily understand.

It is likely that a complete picture of Trump’s activities during that nearly eight-hour period will never be known. But there are several ways in which it might come to light. For starters, it’s possible that, via other subpoenas, the commission already has access to a great many of Trump’s calls. According to The Washington Post, the commission is also investigating whether Trump was using a burner phone to avoid the scrutiny of investigators:

The House panel is now investigating whether Trump communicated that day through backchannels, phones of aides or personal disposable phones, known as “burner phones,” according to two people with knowledge of the probe, who, like others interviewed for this report, spoke on the condition of anonymity to discuss sensitive information. The committee is also scrutinizing whether it received the full logs from that day.

There is more than a little irony in this. In 2016, Trump hammered Hillary Clinton for her use of a private email server, insinuating that this arrangement was deployed for any number of dark and conspiratorial purposes. But the potential use of burner phones to help orchestrate a coup certainly outpaces even Trump’s most bombastic claims about that server. If true, the use of a burner phone only underscores the criminality of Trump’s efforts, his efforts to avoid accountability, and, above all, the fact that his actions on January 6 were premeditated. “I have no idea what a burner phone is, to the best of my knowledge I have never even heard the term,” Trump said in a statement—a classic in the nondenial-denial genre. Lawmakers are, furthermore, also investigating whether there was a larger effort to cover up records from January 6, 2021.

The lack of cooperation from Republicans also showcases their own complicity. Trump purposefully prolonged the riot and encouraged lawmakers to slow down the counting of votes even as rioters breached the Capitol. These same Republicans are now refusing to cooperate with investigators; House Minority Leader Kevin McCarthy even went as far as to threaten telecom companies that provided records to the committee. “Most everyone not cooperating with the committee is helping shield Trump from public disclosure about what happened during that period,” Representative Jamie Raskin told The Washington Post’s Greg Sargent.

Over the past few months, the attention given to the January 6 commission has waxed and waned as several other crises have taken over the news: the botched withdrawal from Afghanistan, then the pandemic-related inflationary woes, and now the ongoing war in Ukraine. But Trump’s effort to subvert the 2020 election remains a matter of paramount importance—just this week a federal judge ruled against Trump, citing the likelihood that the president was complicit in felonious activity. Democrats have thus far struggled to make the case that they represent an existential threat; Trump and his allies, meanwhile, have insisted that they had nothing to do with the violence at the Capitol. But at every opportunity, they have stymied investigators’ attempts to learn precisely what the then-president was doing during the violent fracas. The huge gap in phone records is the most glaring evidence yet that Trump not only was up to no good but was up to something criminal.

[Alex Shephard is a staff writer at The New Republic.]