Despite heavy lobbying by the company, workers at the facility voted by a wide margin for a union. The win on Staten Island could herald a new era for labor unions in the United States. 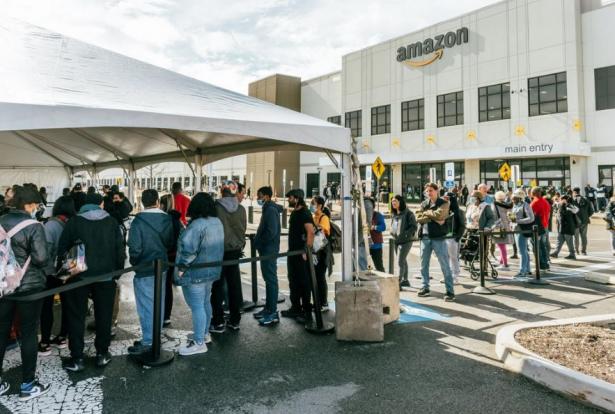 Amazon employees waiting to vote in the parking lot of the JFK8 fulfillment center last week., DeSean McClinton-Holland for The New York Times

Workers at Amazon’s massive warehouse on Staten Island voted by a wide margin to form a union, according to results released on Friday, in a landmark win for a campaign targeting the country’s second-largest employer and one of the biggest victories for organized labor in a generation.

Employees cast 2,654 votes to be represented by Amazon Labor Union and 2,131 against, giving the union a win by more than 10 percentage points, according to the National Labor Relations Board. More than 8,300 workers at the building, the only Amazon fulfillment center in New York City, were eligible to vote.

The win on Staten Island could herald a new era for labor unions in the United States, which saw the portion of workers in unions drop last year to 10.3 percent, the lowest rate in decades, despite widespread labor shortages and pockets of successful labor activity.

No union victory is bigger than the first win in the United States at Amazon, which many union leaders regard as an existential threat to labor standards across the economy because it touches so many industries and frequently dominates them.

The Staten Island outcome came on the heels of what is trending toward a narrow loss by the Retail, Wholesale and Department Store Union at a large Amazon warehouse in Alabama in a campaign. The vote is close enough that the results will not be known for several weeks as contested ballots are litigated.

The surprising strength shown by unions in both locations most likely means that Amazon will face years of labor pressure from independent worker groups, large unions targeting the company and environmental and other progressive activists working with them. As a recent string of union victories at Starbucks has shown, wins at one location can provide encouragement at others.

Amazon hired voraciously over the past two years and now has 1.6 million employees globally. But it has been plagued by high turnover, and the pandemic gave employees a growing sense of power while fueling worries about workplace safety. The Staten Island warehouse, known as JFK8, was the subject of a New York Times investigation last year, which found that it was emblematic of the stresses in Amazon’s employment model.

“The pandemic has fundamentally changed the labor landscape,” said John Logan, a professor of labor studies at San Francisco State University. “It’s just a question of whether unions can take advantage of the opportunity that transformation has opened up.”

Amazon did not immediately comment on the outcome. The company can in principle challenge the vote on grounds that the union’s conduct was improper.

Standing outside the N.L.R.B. office in Brooklyn where the ballots were tallied, Christian Smalls, a former Amazon employee who started the union, popped a bottle of champagne before a crowd of supporters and press. “To the first Amazon union in American history,” he cheered.

Derrick Palmer, who packs boxes at the warehouse and co-founded the union, said he expected other facilities to follow Staten Island. “This will be the first union,” he said, “but moving forward, that will motivate other workers to get on board with us.”

One question facing the labor movement and other progressive groups is the extent to which they will help the Amazon Labor Union, an upstart, independent group, withstand potential challenges to the result and negotiate a first contract, such as by providing resources and legal talent.

“The company will appeal, drag it out — it’s going to be an ongoing fight,” said Gene Bruskin, a longtime organizer who helped notch one of labor’s last victories on this scale, at a Smithfield meat-processing plant in 2008, and has informally advised the Staten Island workers. “The labor movement has to figure out how to support them.”

Sean O’Brien, the new president of the 1.3 million-member International Brotherhood of Teamsters, said in an interview on Thursday that the union was prepared to spend hundreds of millions of dollars unionizing Amazon and to collaborate with a variety of other unions and progressive groups.

“We’ve got a lot of partners in labor,” Mr. O’Brien said. “We’ve got community groups. It’s going to be a large coalition.”

A culture of fear created by intense productivity monitoring that was documented by The Times at JFK8 has been a key motivation for the unionization drive, which started in earnest almost a year ago. The Amazon facility offered a lifeline to laid-off workers during the pandemic but burned through staff and had such poor communication and technology that workers inadvertently were fired or lost benefits.

For some employees, the stress of working at the warehouse during Covid outbreaks was a radicalizing experience to take action. Mr. Smalls, the president of the Amazon Labor Union, said he became alarmed in March 2020 after encountering a co-worker who was clearly ill. Fearing an outbreak, he pleaded with management to close the facility for two weeks. The company fired him after he helped lead a walkout over safety conditions in late March of that year.

Amazon said at the time that it had taken “extreme measures” to keep workers safe, including deep cleaning and social distancing. It said it fired Mr. Smalls for violating social distancing guidelines and attending the walkout even though he had been placed in a quarantine.

While the organizing in Alabama included high-profile tactics, with progressive supporters like Senator Bernie Sanders visiting the area, the organizers at JFK8 took a somewhat different approach. Their insider status helped them build support, as they wore shirts and masks bearing the union’s logo in the building and posted on internal message boards. (The retail workers said they were hamstrung by Covid during their initial election in Alabama and did far more in-person organizing this year.)

For months, they set up shop at the bus stop outside the warehouse, grilling meat at barbecues and at one point even passing out pot. They were active on social media, with TikTok videos and regular tweets about Amazon’s campaign tactics.

They also filed numerous unfair labor practice charges with the N.L.R.B. when they believed Amazon infringed on their rights. The labor agency found merit in several of the cases, some of which Amazon settled in a nationwide agreement to allow workers more access to organize on-site.

At times the Amazon Labor Union stumbled. The labor board determined this fall that the fledgling union, which spent months collecting signatures from workers requesting a vote, had not demonstrated sufficient support to warrant an election. But the organizers kept trying, and by late January they had finally gathered enough signatures.

Amazon played up its minimum wage of $15 an hour in advertising and other public relations efforts. The company also waged a full-throated campaign against the union both while it tried to qualify for the election and once the vote was set, texting employees and mandating attendance at anti-union meetings. It spent $4.3 million on anti-union consultants nationwide last year, according to annual disclosures filed on Thursday with the Labor Department.

In February, Mr. Smalls was arrested at the facility after managers said he was trespassing while delivering food to co-workers and called the police. Two current employees were also arrested during the incident, which appeared to galvanize interest in the union.

In the run-up to the vote, the union projected several images onto the front of the facility on Staten Island, including the message, “They Arrested Your Coworkers.”

The difference in outcomes in Bessemer and Staten Island may reflect a difference in receptiveness toward unions in the two states — roughly 6 percent of workers in Alabama are union members, versus 22 percent in New York — as well as the difference between a mail-in election and one conducted in person.

But it may also suggest the advantages of organizing through an independent, worker-led union rather than a traditional one. In Alabama, union officials and professional organizers were still barred from the facility under the settlement with the labor board. But at the Staten Island site, a larger portion of the union leadership and organizers were current employees, giving them more direct access to co-workers.

“What we were trying to say all along is that having workers on the inside is the most powerful tool,” said Mr. Palmer, who makes $21.50 an hour. “People didn’t believe it, but you can’t beat workers organizing other workers.”

The independence of the Amazon Labor Union also appeared to make Amazon’s anti-union talking points less effective. Over the course of hundreds of anti-union meetings with employees, the company suggested that the A.L.U. was an interloper seeking to come between the company and its employees and use their money for its own purposes.

But these critiques were easier for the union to dispel there. “When a worker comes up to me, they look at me then see I have a badge on and say, ‘You work here?’” said Angelika Maldonado, an employee who was active in the organizing campaign. “‘I’m like yeah, ‘I work here.’ It makes us relatable from the beginning.”

On March 25, workers at JFK8 started lining up outside a tent in the parking lot to vote. And over five voting days, they cast their ballots to form what may become the first union at Amazon’s operations in the United States.

Another election, brought also by Amazon Labor Union at a neighboring Staten Island facility, is scheduled for late April.