“Never has it been clearer that the U.S. Supreme Court majority will do anything it can to advance Republican interests, rather than the law, the Constitution and the will of the people" 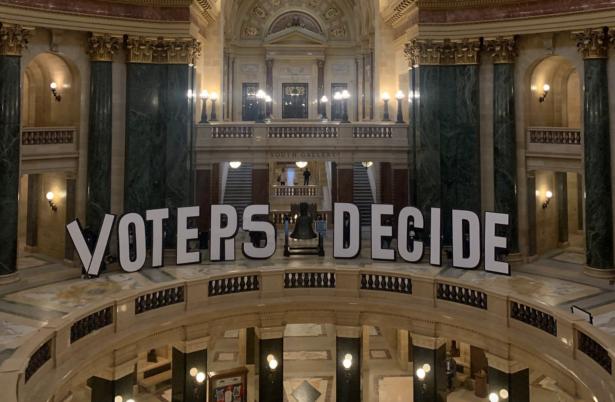 Hundreds of people packed the Capitol for a day-long hearing on Republican legislative leaders’ voting maps, which advocates and experts said are gerrymandered to lock in GOP control, Examiner photo

Over and over again during the Senate Judiciary Committee’s Supreme Court confirmation hearings for Biden nominee Ketanji Brown Jackson, Republicans denounced the idea of “packing the Court”  by expanding the number of justices from nine to 13.

But Wednesday’s decision rejecting Wisconsin’s voting maps and throwing the 2022 election process — which is already underway — into chaos, demonstrates that Republicans have packed the Court already.

First, they blocked President Barack Obama from filling a vacancy in his final year in office. Then they rushed through President Donald Trump’s last-minute appointment days before the 2020 election.

Now, with dangerous disregard for democracy, the 6-3 conservative majority is running roughshod over voting rights to help Republicans across the country cling to power.

Just in the last few years, the Court has upheld voting restrictions that erode the Voting Rights Act and ruled that the federal courts can do nothing to remedy partisan gerrymandering. In the Wisconsin case, the Court is abetting Republican legislators’ efforts to stack the deck that go too far even for the conservative-dominated Wisconsin Supreme Court.

The inconsistency of the Supreme Court’s decision in the Wisconsin case is startling. In other cases, involving North Carolina, Pennsylvania and Alabama, the Court rejected efforts to change voting maps on the grounds that it was too close to the 2022 election.

“It is unprecedented interference with Wisconsin state maps after the administration of our elections has already begun,” says Mel Barnes of Law Forward, a progressive firm involved in Wisconsin’s redistricting lawsuits.

As Henry Redman reports, the court battles over Wisconsin’s new political lines have already pushed the implementation of maps past an important deadline. The Wisconsin Elections Commission, which is responsible for putting the new maps into place, needed the lines to be finalized by March 15 so candidates in elections this fall could start gathering nominating signatures to get on the ballot in the proper districts.

The U.S. Supreme Court decision blocking the maps that Gov. Tony Evers presented and which the state Supreme Court chose over the even-more-gerrymandered Republican legislators’ maps, causes even more delay.

Worse, it is part of a push by conservatives that could further disempower voters and increase the control of gerrymandered Republican majorities in state Legislatures.

Ian Millhiser of Vox reports on two cases coming before the Supreme Court in which Republicans claim that state courts are not allowed to intervene in redistricting cases at all, because of something called the “independent state legislature doctrine.”

“In the worst-case scenario for democracy, should the Court embrace this doctrine, state constitutions would cease to provide any constraint on state lawmakers who wish to skew federal elections in their party’s favor,” Millhiser writes. “State courts would also lose their power to strike down anti-democratic state laws. And state governors, who ordinarily have the power to veto new state election laws, would lose this veto power.”

In Wisconsin, Grethchen Schuldt writes in a March 21 piece on  the Wisconsin Justice Initiative website, three state Supreme Court justices have called for the court to reconsider whether the Legislature can adopt political maps through a joint resolution, bypassing involvement by the governor.

The idea of passing new maps via a joint resolution was kicked around by conservatives at the beginning of Democratic Gov. Tony Evers’ term, as a way of preserving the partisan gerrymander that locked in disproportionate Republican majorities when Republicans controlled both the Legislature and the governor’s office. I wrote about it at the time.

More recently, Schuldt points out, Justice Rebecca Bradley, joined by Justices Annette Ziegler and Patience Roggensack, wrote in a dissent to the court’s 4-3 decision selecting the redistricting maps submitted by Gov. Tony Evers that the court should revisit its 1964 decision in State ex rel. Reynolds v. Zimmerman, upholding the governor’s ability to approve or veto maps proposed by the Legislature.

In other words, Bradley is arguing that there should be no check on the gerrymandered Republican majority’s choice of new voting maps.

The maps that Republican legislators submitted to the Wisconsin Supreme Court would have given the GOP a veto-proof supermajority, in a state that is evenly divided between Republican and Democratic voters.

The good news in Wisconsin is that the state court is under no obligation to reverse its decision on maps, in which conservative Justice Brian Hagedorn sided with the court’s three liberal-leaning justices, Ann Walsh Bradley, Rebecca Dallet and Jill Karofsky. What the U.S. Supreme Court asserted is that there was insufficient evidence cited in the majority opinion accepting Evers’ maps to justify the creation of a seventh, majority-Black Assembly district in Milwaukee, in order to satisfy the requirements of the Voting Rights Act.

The court will have to produce more evidence to support the creation of that district, or change the district. But it does not have to go back to the drawing board on maps.

The Voting Rights Act issue was not the main focus of  the state court’s opinion, which was mostly concerned with the “least change” requirement it had imposed, requiring the new maps to hew closely to the gerrymandered districts Republicans drew in 2011. Ironically, Evers did a better job than did Republican legislators in meeting that standard. And, impressively, he did so while creating more competitive districts overall.

When the state court selected Evers’ maps, it was only a partial victory. The maps were better than the legislative Republicans’ maps because, in an evenly divided state, they created only a slight GOP majority, instead of the supermajority the legislators wanted.

The U.S. Supreme Court had nothing to say about any of the districts beyond the new seventh Assembly district in Milwaukee. There is no reason why its decision should change the rest of the districts in the Evers plan.

The Wisconsin Supreme Court now has several options. The Court can rewrite its opinion, affirming the Evers map and adding more of the evidence it had already gathered to support the creation of the additional district. Or it can gather more evidence. Or it can choose a new map.

“This doesn’t mean they have to go back to the drawing board on the maps,” says Barnes. “We think they already have plenty of evidence on the record. But if the court decides they need to hear more, we’d of course be happy to provide it.”

Barnes does not expect that the Wisconsin justices will reconsider the rest of the districts lines they already approved.

“The extreme end of what they could change is in the specific Milwaukee districts,” she says.

At the same time, however, “the politicization of our courts is rotting our democracy through and through,” says Sachin Chheda, director of the Fair Elections Project, in a statement reacting to the U.S. Supreme Court decision.

“Never has it been clearer that the U.S. Supreme Court majority will do anything it can to advance Republican interests, rather than the law, the Constitution and the will of the people,” Chheda adds.

Former federal judge and Harvard Law School professor Nancy Gertner argues that the Supreme Court’s legitimacy has been undermined by Republican efforts to “manipulate its membership” and to roll back voting rights.

Our democratic institutions are in crisis at every level.

As Gertner puts it, “This is a uniquely perilous moment that requires a unique response.” Gerner favors expanding the U.S. Supreme Court to push back against the gathering threats to democracy.

This much is certain: as citizens we need to fight to claw back our government on every front.

The Wisconsin Examiner is a nonpartisan, nonprofit news site offering a fresh perspective on politics and policy in our state. As the largest news bureau covering state government in Madison, the Examiner offers investigative reporting and daily coverage dedicated to the public interest. We take our inspiration from the motto emblazoned on a ceiling in our state Capitol: “The Will of the People Is the Law of the Land.”  The Examiner depends on support from people like you to produce high-quality journalism without advertising, subscription fees or paywalls.  Please help us with this public service. Your donations allow us to expand our coverage, purchase equipment and fight for open records.  DONATE