How the American system can, and often does, protect tyrannical and overbearing minorities, like the architects of Jim Crow.

April 3, 2022 Jamelle Bouie New York Times
Printer friendly
This Is Why It Took More Than 100 Years To Get an Anti-Lynching Bill Published April 3, 2022 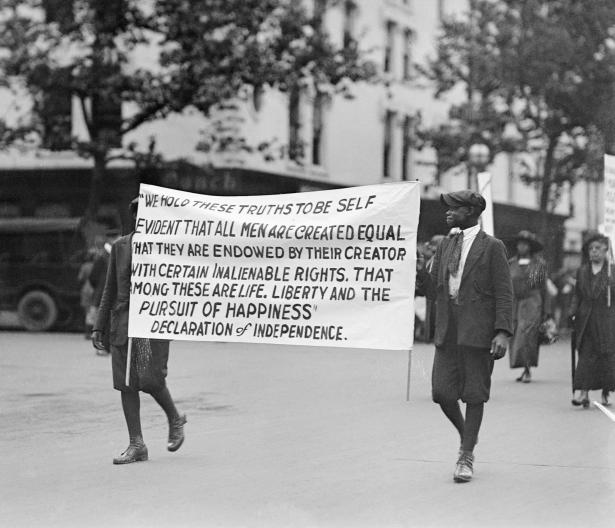 On Tuesday, President Biden signed a bill to make lynching a federal crime. Devised by a group of Black lawmakers in the House and Senate — Tim Scott of South Carolina, Cory Booker of New Jersey, Bobby Rush of Illinois and Kamala Harris of California (when she was still in the Senate) — the law comes into being after more than 200 failed attempts, over more than 100 years, to pass anti-lynching legislation through Congress.

“Lynching was pure terror to enforce the lie that not everyone, not everyone belongs in America, not everyone is created equal,” Biden said, speaking to civil rights leaders, journalists and others during the signing ceremony at the White House.

“Lynching is not a relic of the past,” said Vice President Harris. “Racial acts of terror still occur in our nation. And when they do, we must all have the courage to name them and hold the perpetrators to account.”

Harris’s remarks help illustrate why it is that activists fought so long, and so hard, to make lynching a federal crime. A lynching is more than a violent act meant for a single individual. Past and present, lynchings are meant to intimidate an entire community — to reinforce hierarchies of race and class through brutal acts of communal violence.

“Compared to other forms of terror and intimidation that African Americans were subject to under Jim Crow, lynching was an infrequent and extraordinary occurrence,” the historian Amy Louise Wood explains in “Lynching and Spectacle: Witnessing Racial Violence in America, 1890—1940.” And yet, “despite, or even because of, its relative rarity, lynching had a singular psychological force, generating a level of fear and horror that overwhelmed all other forms of violence.”

Lynchings were barbarous, defined by an extreme, often sadistic violence, including burning, sexual mutilation and the removal of limbs. “Whatever faults and failings other nations may have in their dealings with their own subjects or with other people,” the journalist Ida B. Wells-Barnett wrote in “The Red Record,” “no other civilized nation stands condemned before the world with a series of crimes so peculiarly national. It becomes a painful duty of the Negro to reproduce a record which shows that a large portion of the American people avow anarchy, condone murder and defy contempt of civilization.”Lynchings were, by their very design, an affront to the rule of law, and one did not have to be a racial egalitarian, like Wells-Barnett, to want to ban the practice and punish its perpetrators.

When, in 1918, the Missouri congressman Leonidas Dyer introduced his (and the nascent N.A.A.C.P.’s) anti-lynching bill to the U.S. House of Representatives, he specifically cited the extent to which lynching — and the “race riots” that inspired him to embrace the anti-lynching cause — degraded the rule of law and made a mockery of the Constitution.

“The United States has, as all governments have, a political and legal interest in the lives of its citizens,” Dyer said during a hearing of the House Judiciary Committee:

It would seem that open and notorious neglect or omission of this duty on the part of the State, by suffering lawless mobs to murder citizens for want of legal protection, may be declared an offense against the United States, and if so, that the United States may punish all persons who contribute to it.

In 1922, the House voted to pass a version of his bill, 230 to 119. It then died in the Senate, a victim of the filibuster. So, what happeneTo answer that, we have to think a little about the position of the South within the American political system at the time. Jim Crow disenfranchisement of Black Americans (and many whites as well) gave reactionary Southern elites an unbreakable grip on the politics of the region in a way they had not attained since before the Civil War. Facing little competition, Southern lawmakers could hold their seats for decades, which brought power and, crucially, seniority — the coin of the realm in the House and Senate.

What’s more, Southern lawmakers acted as a bloc, both in Congress and within the Democratic Party, where they continued to reside and to which they would hitch their political loyalties until well after the Second World War. As the historian David M. Potter argued in his 1972 book, “The South and the Concurrent Majority,” the effect of all this was to give the Jim Crow South a kind of veto power over national policy, in a way that was not unlike the system of “concurrent majorities” envisioned during the first half of the 19th century by the pro-slavery theorist and long-serving senator John C. Calhoun.

Here’s how it worked. Within the Democratic Party, thanks to rules at the time for choosing a presidential nominee, the South, when voting as a bloc, could veto any nominee deemed hostile to its interests. Within Congress, control of committees could kill legislation that threatened white Southern power and autonomy before it reached the floor, or force lawmakers outside the South to bend to their preferences. Any bill that somehow survived the House could be strangled in the Senate using the filibuster, which is what happened, again and again, to anti-lynching (and other civil rights) legislation.

There is something a little funny here, if you have not seen it already.

The reigning justification for institutions like the Senate or rules like the filibuster — or, for that matter, the entire edifice of American federalism — is that they protect the rights of the minority from the depredations of an overbearing majority. But it is in the story of the long and frustrated effort to make lynching a federal crime — to, in Dyer’s words, “protect the lives of citizens of the United States against lynch law and mob violence” — that we see the reverse. We see how the American system can, and often does, protect tyrannical and overbearing minorities, like the architects of Jim Crow, from the only power, the federal government, that can defend and enforce democratic equality across the entire nation.

We should celebrate the passage and signing of an anti-lynching bill. It is, truly, a historic accomplishment. We should also pause to reflect not just on the long struggle to make this law a reality, but on the ways that our system itself was the primary obstacle to protecting the lives and livelihoods of its own citizens.