labor Higher Ed Labor Unites for Equity for All: Faculty, Staff and Students

‘We are all campus workers’: New coalition confronts crisis in higher ed with coordination and collaboration. 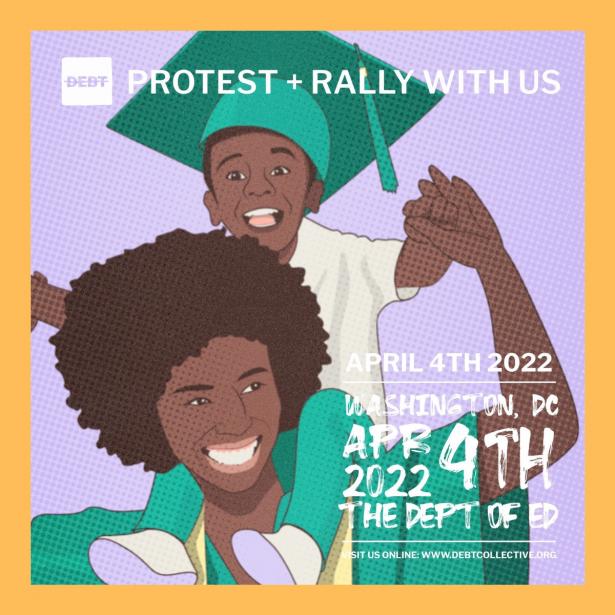 The Debt Collective is calling for a Day of Action for Student Debt Cancellation April 4.,

Students swell the picket lines of dining service workers. Staff fight for cancellation of exorbitant graduate student workers’ fees. Undergraduate student workers learn about the precarity and low pay behind the title “adjunct” and demand their university administrations do better. Tenured faculty insist that part-time instructors receive benefits.  Across higher education, workers are realizing that they depend on each other to get work done, from faculty, academic staff, graduate and undergraduate student workers, to janitors and clerical and technical workers—and the landscape of organizing is changing.

Higher education labor unions have generally been stratified, but now universities with multiple unions representing various types of employees are seeing increased cooperation and collaboration. Nationally, unions are in communication, looking for ways to support and strengthen each other. And organizers from a broad cross-section of the workforce have formed Higher Ed Labor United to deepen and widen this solidarity.

Administrators have used the pandemic as an excuse to inflict mass precarity on all workers, from professors, librarians and academic advisors to support staff, service workers, and facilities workers. During 2020, 650,000 workers, or 13% of the sector, lost jobs.

Fifty years ago, 70% of faculty held tenure-line positions, an arrangement that came with exciting teaching, innovative research, and job security, the basis for academic freedom. Tuition was non-existent at many institutions.

Today almost 75% of faculty are contingents: adjuncts on semester contracts, part-time and full-time professors, visiting professors, etc. Like much of the contemporary workforce, they have seen wages stagnate, they get few benefits, if any, and routinely face job insecurity. While labor standards have declined, tuition has increased by 1,200% since 1980 and student debt has reached a historic $1.73 trillion for over 45 million people. Such debt-funded, casualized employment undermines consistent, reliable education. It also makes parents ask what they are paying for, students anticipate decades of debt, and the public doubt the value of higher education at all.

But this pain is felt unevenly: jobs more heavily done by workers of color, including community college instructors and service, maintenance, and transportation workers, have seen the deepest cuts. Today’s higher education workforce is more female and more Black and Brown than ever before, and the typical job security of a professor or a service worker is quite similar to other workers in retail, hospitality, or drivers for Uber.

Unsurprisingly, starting in the late 1990s, faculty and staff began to resist casualization by organizing. Advocacy groups formed. Grassroots organizing led to affiliations with unions that hadn’t often represented faculty, like the Communications Workers of America (CWA), United Auto Workers (UAW), United Electrical Workers (UE), and the United Steelworkers (USW). Coalitions across unions have formed and crashed, but each time they come back bigger and stronger.

In July 2021, the Higher Ed Labor United (HELU) coalition emerged from concerted efforts of campus workers across the United States. Scholars for a New Deal for Higher Education (SFNDHE) and Rutgers AAUP-AFT, along with other allies, coordinated a first summit with 50 union locals to plan a national strategy. The summit attendees included faculty, staff, and students working on all types of campuses – public community colleges, public colleges, and public and private research universities. There were members from the American Association of University Professors (AAUP); the American Federation of State, County, and Municipal Employees (AFSCME); the American Federation of Teachers (AFT); the National Education Association (NEA); the Service Employees International Union (SEIU), and the Teamsters, and from the CWA, UAW, UE, and USW noted above, and many independent locals.

This first meeting developed a shared Vision Platform to support the next phase of outreach and planning. Endorsers of the Vision Platform at that first summit became the initial members of HELU.

More than 130 unions and allied organizations, representing more than 550,000 workers at community colleges, professional schools, and major research institutions across 28 states have now joined HELU. Many of these unions are bargaining contracts this year, and the coalition is organizing people and empowering them to join in even larger struggles. That is exactly what a progressive, cross-class, national labor movement focused on workplace rights, dignified wages, and racial, gender, and environmental justice can build.

HELU organizers believe now is the time to build this deep solidarity and coordinating capacity across unions and organizations. Last year 120,000 workers struck for 3.27 million work days across 256 strikes. Heartening developments range from the Starbucks Workers United organizing wave of over 150 workplaces to the coordinated strikes and strike votes by around 8,000 public sector workers in Minneapolis-St. Paul.

In the last week of February 2022, HELU held a second summit. With speeches from dozens of labor leaders and activists including Jane McAlevey, Sara Nelson, Erica Smiley, Stacy Davis Gates, Adom Getachew, Arlene Inouye, and Naomi Klein, workshops focused on anti-racism and social justice, talks on labor and community organizing successes from union officers and rank-and-file members, and deliberative breakout discussions for all attendees, the alignment of local campus struggles into a national movement took a leap forward.

The outcomes of the summit, now being distributed to affiliated organizations, focus on three core tasks:

To focus on one concrete immediate goal, HELU is supporting the work of the Debt Collective, a successor to Occupy Wall Street. The Collective has twice successfully paused mandated repayments of the $1.7 trillion in student debt. Their next push will be to end student debt, which the Higher Education Act gives the president to do with the power of a pen stroke. This debt jubilee would be among the most important redistributions of wealth since the 1960s, with no ruling elite directly impacted, and would be a significant step in the direction of establishing higher education as a public good. To further amplify the Debt Collective and allied organizations’ message, a Day of Action at the Department of Education in Washington, D.C. will be held April 4. While the Debt Collective is chartering buses for transportation where feasible, HELU affiliates are also organizing campus-specific events.

To that end, among other ambitious goals, HELU invites all higher education workers and their supporters to join in advocating, organizing, and fighting for a more just labor landscape, an end to driving debt downward onto students, and better conditions for all workers across job titles. When workers—and faculty are workers, too—join together to take collective action and build leverage for shared demands, they can move systems.

Instead of mass contingency and precarity, U.S. higher education workers can have shared job security and academic freedom. History provides a lesson in how to achieve that objective: in 1935, fewer than 50% of campuses had tenure policies, and by the early 1973, nearly 100% implemented this foundation for academic job security. Rather than fighting site-by-site battles over different jobs and budget cuts, higher education labor unions are taking action by building the national solidarity necessary to demand tenure and equivalent job security across the U.S.