books Where Is the Women’s Movement?

Women’s movements are often born in periods of general political upsurge. Why isn’t that happening? Why do young feminists seem more interested in social media than in building feminist organizations? 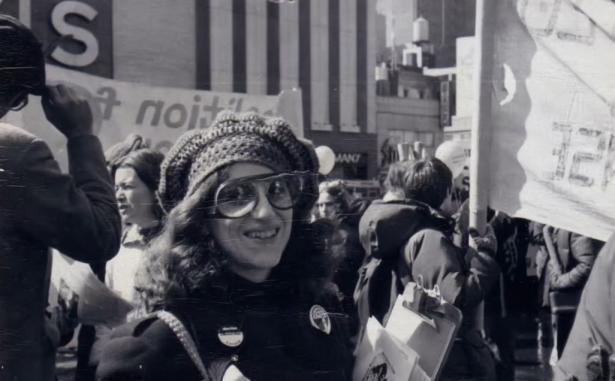 A demonstration led by the Committee for Abortion Rights and Against Sterilization Abuse (CARASA)., Photo courtesy of Meredith Tax

In 1980, my first book, The Rising of the Women: Feminist Solidarity and Class Conflict 1880–1917, was published. In it, I used the term “united front of women” to mean a broad women’s movement of different classes within which progressives must fight for leadership without destroying the unity needed to move forward. The suffrage movement in the early part of the 20th century was like that, drawing in everyone from millionaire J.P. Morgan’s daughter Anne to radical union organizer Clara Lemlich. While anarchists and syndicalists saw the vote as a bourgeois distraction, most socialists recognized it was a basic democratic right; the Socialist Party’s founding program in 1901 included equal rights for men and women. When the party did nothing to put this position into practice, socialist feminists around the country organized local women’s groups and, in 1908, submitted two resolutions to the party convention: one to set up a Women’s National Committee, the other for a women’s suffrage campaign. Within a year, the party had increased its female membership 10 times over.

Similar strategic questions confront progressives in any united front situation: Do you give up your independence to be part of the action, build your own organization and try to get your ideas accepted by the broad movement, or stay pure and yell at the others from the sidelines? A mature left is capable of working with liberals without forgetting its objectives or losing its soul. An infantile left is not. But without autonomous organizations, left-wing feminists cannot really participate in the feminist movement at all—let alone try to lead it. To overcome the present fragmentation and confusion of the US women’s movement, we need a new wave of autonomous women’s organizations, formed by left feminists.

The Rising of the Women: Feminist Solidarity and Class Conflict, 1880–1917

As The Rising of the Women discusses, women’s movements are often born in periods of general political upsurge. Why isn’t that happening? Why do young feminists seem more interested in social media than in building feminist organizations?

Part of the problem is that many were exposed to feminism in post-structuralist women’s studies programs that deliberately separated theory from practice. They were also taught a history of the feminist movement that omits the work of left feminists. And recently, as white feminists began to grasp the enormity of the obstacles faced by Black women, they became so afraid of making mistakes and being called out that they tended to go quiet, while young male activists, though eager to tell you their pronouns, are largely clueless about patriarchy. Yet this is a moment that calls for fearless ideological debate in both the feminist movement and the left, rather than the call-out culture rightly condemned by Loretta Ross.

Another aspect of the problem is that social justice activists, many of them women, inhabit a movement culture that teaches them about structural racism—but not about patriarchy. In 2008, Linda Burnham, now research director of the Domestic Workers Alliance, did an in-depth study of how 11 US community organizations, largely people of color, approached racism and sexism. She found that while all of them had a program to deal with racism, none had anything comparable on sexism. Is it any wonder that most of the US left today is a long way from grasping the importance of feminism, let alone integrating it into a general political program?

And yet the need for a strong, anti-racist, feminist left, has never been more urgent. In the past 30 years, global economic integration based on free-market ideology has led to obscene wealth for a very few and desperate poverty for most, increasingly leading to vast migrations of people fleeing war or starvation. Now climate change, Covid, economic uncertainty, and frequent wars, most recently the Russian invasion of Ukraine, are putting overwhelming stress on a system that has already reached its breaking point. The need for new answers and new ways of doing politics is clear. But the reborn US left is young and still figuring things out.

The rebirth of the left began in 2011, with Occupy Wall Street. The Bernie Sanders campaigns of 2015 and 2019 led to the resurrection of Democratic Socialists of America (DSA) as a largely white mass organization, and the election of many new progressive politicians. Meanwhile, in 2013, Black Lives Matter (BLM) began with protests against the acquittal of the man who killed 17-year-old Trayvon Martin. This led in 2016 to the formation of the Movement for Black Lives, a coalition of over a hundred abolitionist, anti-capitalist groups that explicitly lifts up the leadership of women and trans people, including local groups that focus on building community, mutual aid, and self-care. BLM went on to build a national network that culminated in the vast mobilization after the murder of George Floyd in 2020, with strong participation from the white left, even in rural places where this left sprang out of nowhere.

But where are the comparable feminist organizations? They don’t exist—and this is a problem for everyone, because the complexities of today’s crisis require the intelligence and energy of our whole people and the organized strength of women is critical to any fight against fascism. But the only parts of the women’s movement that seem to have a sense of direction are organizations of Black women and groups working for abortion rights and reproductive justice, both of which have been fighting off right-wing assaults since the late 1970s. The rest of the US feminist movement, including its progressive wing, has no clear leadership or organization. The public face of liberal feminism is made up of old, bureaucratic, top-down groups whose political allegiance belongs to the Democratic Party rather than to any mass base of women. There is also a fragmented army of small, often local, feminist NGOs, mostly single-issue and donor-dependent; feminist professional organizations; and a left feminist network of academics that calls women’s strikes once a year in solidarity with the Latin American movement but is hardly visible the rest of the time.

Meanwhile, young feminists concentrate on social media, blogs, and campaigns—an emphasis that entails paying a lot of attention to personalities, branding, and celebrity. While #Me Too is unquestionably a powerful movement against job-related sexual harassment and assault, it is not a membership organization, so there is no way for people who support it to ensure its consistency or change its public face. Then there’s the Women’s March, which started out strong after Donald Trump’s inauguration in 2016, staging the largest protest in US history: up to a million people in Washington, D.C., and between 3 and 5 million people in the United States as a whole. But because it originated on Facebook, its governance has fluctuated, and it has had many ups and downs since 2016.

When Georgia passed a law giving control of women’s pregnancies to right-wing vigilantes and Texas cut off the right to abortion at six weeks, the US feminist movement responded as best it could. Planned Parenthood did education and lobbying, the Women’s March called a demonstration, and groups revved up to fund abortion-related travel. But there was no concerted, mass response on the scale needed, because no feminist organization was capable of putting one together; nor did national progressive organizations do anything major to help, despite their frequent calls for a united front against fascism. As in the late ’60s, when I first became active, the situation calls for a new wave of left feminist work that can develop a national organization, a task we failed to grasp in the ’70s.

This may sound like an impossible task considering where we are now. But as I argue in The Rising of the Women, things are possible in a period of progressive upsurge that are not possible in other periods. In 1969, a handful of us started Bread and Roses in Boston and, within a couple of months, had over a hundred members. When the Hyde Amendment cut off Medicaid funds for abortion in 1977, CARASA, the Committee for Abortion Rights and Against Sterilization Abuse, was started by about 30 activists in New York; within a year, we were calling demonstrations of thousands and starting chapters in other cities and, in a few more years, were part of a national network for reproductive rights.

A large and aggressive right-wing movement is on the attack, led by angry white men, racists, and religious fundamentalists. In this crisis, every progressive activist needs to understand the specific ways that gender, patriarchy, race, ethnicity, and class intersect and overlap. In addition, some progressive feminists have to build organizations that can work within a broad united front of women, while others continue to work within the left to achieve our common social justice objectives. Unless we can do all this—and fight climate change at the same time—we will fall short. And our failure could affect the future of human life on earth.

[Meredith Tax has been a writer and feminist organizer since the late 1960s. She is the author of A Road Unforeseen: Women Fight the Islamic State, among other books, and a founding member of the Emergency Committee for Rojava.]

This essay was adapted from the introduction to the third edition of The Rising of the Women: Feminist Solidarity and Class Conflict 1880–1917, published today in Verso’s Feminist Classics series.