Russia’s Success in Syria’s Civil War Doesn’t Mean Much for Its Chances in Vast, United Ukraine 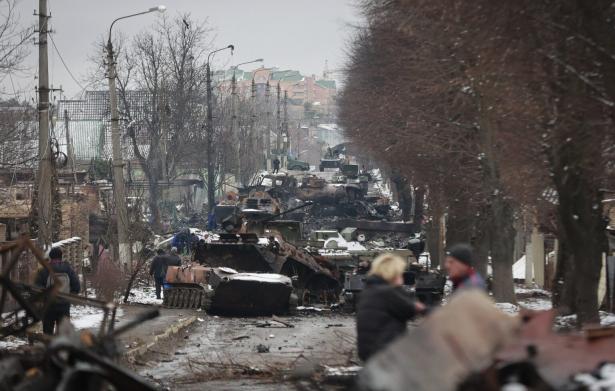 As Russia appoints a veteran of the war in Syria as its overall military commander in Ukraine, who is expected imminently to launch an offensive in the Donbas industrial area, pundits ask if the tactics that proved successful in Syria could now be employed in Ukraine.

The new appointee is General Alexander Dvornikov, who was sent to Syria in September 2015 when Russia intervened directly in the war to stop a rebel offensive backed by Saudi Arabia which was making ground against the forces of President Bashar al-Assad.

Russian air support for the Syrian army was of crucial assistance for the Assad government and continues to this day with 182 Russian air strikes since the start of April according to the Syrian Observatory for Human Rights.

Gen Dvornikov, who became commander of the southern district in Russia in 2016, was credited by Moscow with turning the tide in Syria. Critics accused him of inflicting heavy civilian loss of life by bombarding villages, towns and cities, making them uninhabitable.

These may have been his tactics, but they had been used by the Syrian government since at least 2012. The appointment of Gen Dvornikov was confirmed by an unnamed US official, but not by Moscow which does not announce such appointments.

Long before Russians intervened directly in Syria, I would drive nervously through districts in north Damascus where every structure had been smashed by shellfire and bombs and the ruins then levelled by bulldozers to prevent them being used for cover by snipers.

Surviving inhabitants had fled and nobody knew how many had died: in Daraya, once an opposition stronghold in south Damascus, the tall apartment blocks were still standing, but gutted and emptied of people.

Above the entrance to a bunker, said to be too dangerous to enter, somebody has written on the wall “the martyrs of Syria are so many that they will build a new Syria in heaven”.

The Russians fine-tuned and reinforced what the Syrian government was already doing, suggesting that it rely less on massive but ill-directed firepower and more on squads of infantry with snipers’ rifles and machine guns.

This is effective, but the problem for the Syrian army – and the same may be true of the Russians in Ukraine – was that they were short of infantry and wanted to keep their casualties low. Simple lack of numbers may also explain the Russian failure to make headway in north Ukraine and the reliance on vulnerable columns of tanks and armoured vehicles that proved easy for Ukrainian forces to ambush.

A key difference between the military landscape in Syria and Ukraine is that Syria is a jigsaw puzzle of hostile communities divided by religious and, on occasion, by ethnic allegiances.

In a Damascus district named Barzeh, artillery fire had reduced anti-government Sunni Arab neighbourhoods to a tangle of broken concrete beams and collapsed floors, while nearby tall blocks populated by pro-government members of the Alawite community, who believe in a variant of Shi’ism, were unscathed.

In Ukraine so far, Russia does not appear to have succeeded in mobilising local support outside the Donbas self-declared republics of Donetsk and Luhansk where fighting is expected to escalate in the near future.

But one parallel between Syria and Ukraine which works all too well is that modern urban warfare everywhere inevitably involves heavy civilian casualties, and this is true regardless of who is doing the attacking.

Whole districts of Damascus, Homs and East Aleppo have been wrecked or levelled by Syrian government/Russian bombardment, but the same is true of Raqqa, formerly the Islamic State de facto capital in northeast Syria, which was subjected to intense airstrikes and artillery fire by the Americans in support of Kurdish-led forces.

The city of Mosul, the Isis headquarters in Iraq, suffered a nine-month siege in 2016/17 by Iraqi troops backed by American airstrikes and much of the Old City was annihilated. I was in touch by mobile phone with a number of civilians who lived there during the siege. When it ended, I tried to find out what had happened to them to discuss their experiences, but they all turned out to be dead or missing.

Air forces the world over tend to be dishonest about their ability to distinguish civilian from military targets. But investigation on the ground after airstrikes has invariably shown that civilian and military personnel were in the same place or one can be easily mistaken for the other.

This happens naturally but also as a result of deliberate choice with jihadis in northern Syria sometimes occupying one floor of a five-storey building while floors above and below them are occupied by the normal residents.

The most striking contrast between the Russian armed forces’ intervention in Syria in 2015 and in Ukraine in 2022 is in the level of military competence.

Western governments had hoped that Russia would become bogged down in the Syrian quagmire, but instead it made political and military gains using airpower and a modest number of advisers.

Contrast this with the Russian invasion of Ukraine on 24 February, which stumbled from the beginning. Its troops failed to achieve their objectives, though the precise nature of these is still unclear. Too few Russian troops advanced on too many fronts to enjoy a battle-winning superiority in numbers and were forced to retreat after suffering heavy losses.

But triumphalism on the part of Ukrainian leaders and western military experts could still turn out to be dangerously premature – and the Russian success in Syria was not as atypical as it now appears to be.